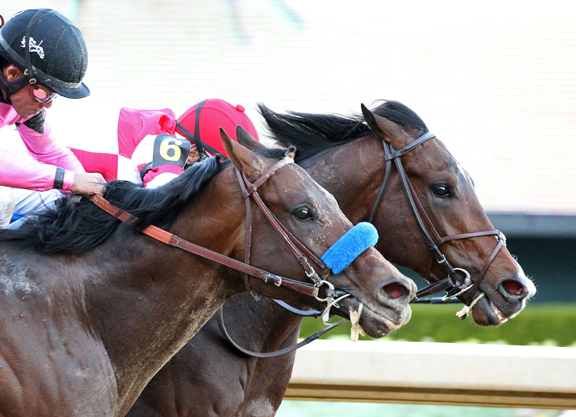 Having finished second by narrow margins in a trio of starts before breaking through by an emphatic nine lengths over a sloppy seven furlongs at Santa Anita last out Feb. 2, Omaha Beach proved that the proverbial light had come on for him as he dug in gamely to fend off the most formidable of foes.

Omaha Beach broke very alertly, but settled in just off the pace in the three path before moving up to press from second after an opening quarter in :23.54. Game Winner, meanwhile, sat back in sixth, also out in the clear. Omaha Beach seized the advantage after a half in :47.29, and started to sprint away as a busy Joel Rosario worked hard to get the chalk to go and get the leader. Omaha Beach was still going better of the top two as they hit the quarter pole, and Game Winner finally wore him down in the late stages but came up a jump short. The final time of 1:42.42 was slightly quicker than the 1:42.49 it took to complete the first division of the Rebel.

Third behind recent El Camino Real Derby third More Ice (More Than Ready) in his grassy Del Mar debut Sept. 2, Omaha Beach was beaten a nose by impressive next-out GIII Cecil B. DeMille S. winner Flying Scotsman (English Channel) back on the grass in Arcadia Sept. 29. He then came up a neck short to subsequent Eddie Logan S. winner Bob and Jackie (Twirling Candy) back in San Diego Nov. 18. The dark bay was switched to the dirt this season, finishing runner-up to well-regarded Nolo Contesto (Pioneerof the Nile) before his breakthrough success, which was good for a career-top 90 Beyer Speed Figure.

“Coming out of a maiden race, it's a big step up,” Mandella said. “Game Winner ran really good. He hadn't run in a long time. He'll probably be tough next time, but mine just broke his maiden. He might be tougher, too. We always thought he was a really good horse. Being a War Front, I thought maybe he was going to want turf. But I was wrong with that. He wants dirt.”

Off his pair of runner-ups on the afternoon, Bob Baffert said, “I would have liked to have won, but I'm very happy with both horses. They both ran well off the layoff. Thank goodness for the Cella family [owners of Oaklawn Park]. We got to run both horses today. It was great racing.”

Omaha Beach is the 44th graded winner for top sire War Front, and the second son of him to take the Rebel–Bob Baffert-trained The Factor did so in 2011. He is also becomes the second major Kentucky Derby contender by the Claiborne resident, joining GII Risen Star S. and GIII Lecomte S. winner War of Will, who is favored for next Saturday's GII Louisiana Derby. Omaha Beach's dam was a $3.2-million Keeneland September yearling and is a daughter of blue hen MGISW Take Charge Lady, making her a half-sister to Take Charge Indy (A.P. Indy), the sire of the other Rebel division winner Long Range Toddy. Charming failed to get in foal to American Pharoah after producing Omaha Beach and, after being given the following year off, was bred back to the Triple Crown winner last breeding season.