Ollie's Candy Has Some Questions to Answer in Phipps 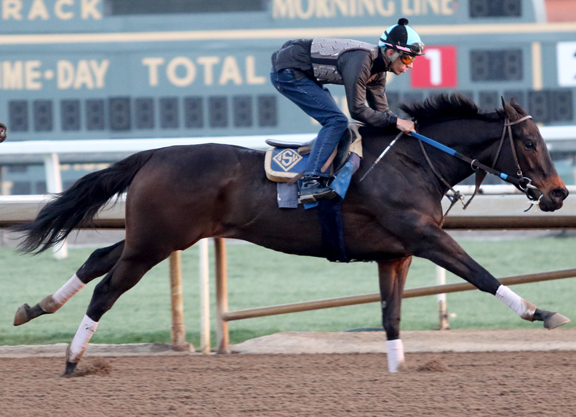 With divisional heavies the likes of Midnight Bisou (Midnight Lute), Serengeti Empress (Alternation) and the comebacking Eclipse Award winner Monomoy Girl (Tapizar) all eye-balling a potential clash in the GII Fleur de Lis S. at Churchill Downs in two weeks' time, Saturday's GI Ogden Phipps S. may lack a 'marquee' name, per se, but it remains a competitive affair that offers the winner a fees-paid berth into the GI Breeders' Cup Distaff at Keeneland Nov. 7.

Ollie's Candy (Candy Ride {Arg}), winner of last year's GI Clement L. Hirsch S., was fourth in last year's Distaff, but has not lost a step at five. A distant third to Ce Ce (Elusive Quality) in the Mar. 14 GI Beholder Mile S., the homebred was given an enterprising ride by Joel Rosario in the GI Apple Blossom H. Apr. 18, leading on a supersonic pace only to be nabbed on the line by Ce Ce. She is a deserving favorite, but must prove she can handle this track's one-turn route configuration and there figure to be no breathers this time around either.

Somewhat surprisingly, Point of Honor (Curlin) makes her first appearance at Big Sandy, having won the 2019 GII Black-Eyed Susan S. at Pimlico while finishing runner-up in the GI CCA Oaks and GI Alabama S. at Saratoga. A useful second in a seven-furlong handicap at Tampa Mar. 7, the chestnut found herself as many as 23 lengths off the pace in the Apple Blossom after a slow start, was very wide on the turn and ran on gamely to be third, beaten under three lengths.

“We hope for a better trip,” said Eclipse Thoroughbred Partners' President Aron Wellman. “She got pinched at the back and lost all position. She was hung wide and had to weave her way through traffic and still ran very, very well in a highly-rated Apple Blossom. I was proud of the effort that day and I'm hoping for a better trip.”

The beautifully bred Pink Sands (Tapit), a daughter of GISW Her Smile (Include), was a listed winner last season, but has discovered her best form this year at five with swooping successes in the one-mile GIII Rampart S. in December and in the GII Inside Information S. the following month. She, too, would benefit from any speed duel up ahead of her and a board finish at this level would enhance her already considerable value going forward.