Oleksandra Mows Down the Boys in the Jaipur 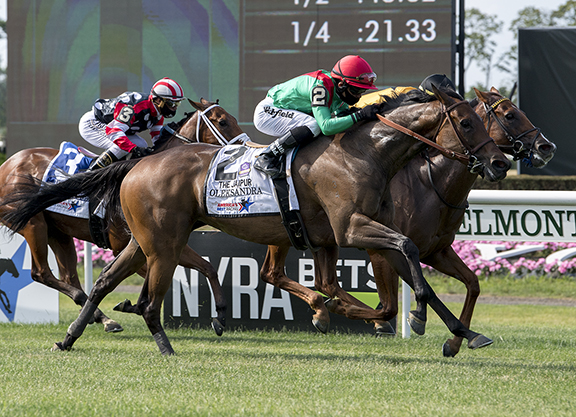 Oleksandra (Aus) (Animal Kingdom) got the best of the boys and secured a spot in the gate at the Breeders’ Cup with a late-rallying victory in the GI Jaipur S. at Belmont. Trailing the field early, the 9-4 chalk bided her time as Pure Sensation (Zensational) battled Hidden Scroll (Hard Spun) through swift opening splits of :21.33 and :43.52. Swung out three wide, the dark bay picked it up approaching the far turn and charged down the lane, inhaling her competitors to nail new leader Kanthaka (Jimmy Creed) on the line.

“She had been training really well into this race,” said trainer Neil Drysdale, winning his first New York Grade I since A.P. Indy won the 1992 Belmont S. It was his first graded winner since sending out Sunday Break (Jpn) (Forty Niner) to win the 2002 GII Peter Pan S. “She is so much fun to watch race,” he said. “She makes life very exciting. At Santa Anita, going five and a half furlongs, it’s very difficult to run down speed. We were pleased with the way she ran and that’s why we sent her to Belmont.”

He continued, “The speed up front helped her, but on the other hand I’ve seen her do well with slower fractions. The main thing is the turn of foot she had and she really put that on display.”

Capturing the Smart N Fancy S. at Saratoga in August, Oleksandra finished third in the GIII Kentucky Downs Ladies Sprint S. Sept. 7. Returning to winning ways in Keeneland’s GIII Buffalo Trace Franklin County S. Oct. 11, she rallied to be second to the speedy Jolie Olimpica (Brz) (Drosselmeyer) in Santa Anita’s GII Monrovia S. May 25, a race her dam annexed back in 2008. Though she has earned a fees-paid berth to the GI Breeders’ Cup Turf Sprint, Oleksandra is not yet nominated to the series and would have to be supplemented as a horse of racing age.

Oleksandra is the second Grade I winner for Animal Kingdom and his first in the Northern Hemisphere, the other being G1 Australian Derby winner Angel of Truth (Aus). She is also one of five graded winners and 12 stakes winner for the stallion. Her dam Alexandra Rose was a graded winner in both America and South Africa and is a half to three other South African stakes winners. The winner has a yearling full-brother, bred on Southern Hemisphere time, named Prince Alexander (Aus).