Old Head on Young Shoulders to the Rescue 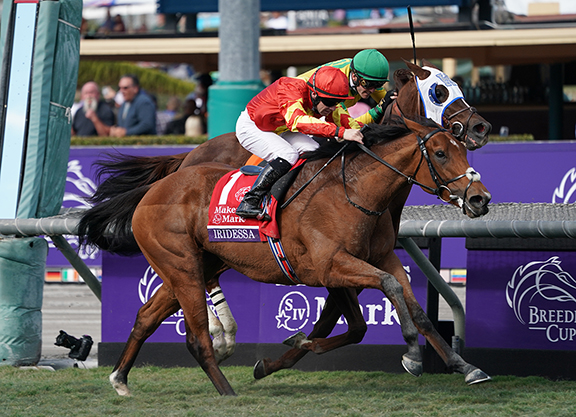 Arcadia, CA–They call it the Breeders' Cup for a reason. And if Aidan O'Brien had a tough couple of days here, along with every other European trainer, then he will gain all the consolation he might need in now being credited as “sire” not only of the youngest jockey ever to win at this meeting, but also of the youngest trainer.

Obviously absolutely equal genetic credit, for the instinctive mastery their son Joseph has now extended to a second vocation, is due to Aidan's wife Annemarie. And who can say whether she has any less parity, when the question moves from nature to nurture?

After all, she was herself raised by a horseman of fairly unique renown; and, lest we forget, her own professional accomplishments render it still more distasteful than would anyway be the case, to refer to her merely as Aidan's wife, or Joseph's mother, or come to that even as old Joe Crowley's daughter.

Regardless, it seems absolutely apt that Joseph's parents should be celebrated not only as breeders of the trainer, but also as breeders of Iridessa (Ire) (Ruler Of The World {Ire}). That had also been true of another landmark filly, their Whisperview Trading Ltd having bred Intricately (Ire) (Fastnet Rock {Aus}) to become their son's first Group 1 winner as a trainer in the Moyglare Stud S. That was just three years ago, and Joseph is still only 26–11 years younger than Wayne Lordan, who rode Iridessa so well. But the way Joseph has since cemented his stable's status, both in Ireland and beyond, matches even his historically precocious rise as a jockey.

Joseph was as natural a rider as many of us have seen in Europe, maybe since the days of Piggott himself, though inevitably there were observers as deficient in perception as in charity who sought to turn the unusual opportunities of his upbringing–namely daily, domestic exposure to models of both genius of horsemanship and the capacities of a well-bred Thoroughbred–into a crushing burden.

Nor should we forget, in observing his brother Donnacha's somewhat less intense profile during his own rise as a jockey, that it was Joseph who had to clear the path through all the petty resentment, through all the puerile, social-media nonsense that sometimes became “damned-if-you-do, damned-if-you-don't”. The pressures Joseph absorbed in the saddle were partly those he could then spare his brother.

Perhaps it was here at the Breeders' Cup that Joseph finally made even the most ignorant recognise how preternatural was his flair. Not necessarily, as you might surmise, in his record-breaking success on the wonderful St Nicholas Abbey (Ire) (Montjeu {Ire}) in the 2011 Turf at Churchill Downs; but in sharing a photo for the Classic here at Santa Anita, two years later, on Declaration Of War (War Front). That day you would not have known whether it was Joseph, or Gary Stevens on the winner, who had ridden dirt winners by the thousand.

There was always a bittersweet quality to those achievements, given how the weighing scales were always going to confine his longevity in the saddle. But Joseph has now seamlessly replicated that whole process as a trainer: again enduring envious whispers, as owners stampede to his stables; and again making his definitive breakthroughs on the international stage.

First there was that extraordinary success in the Melbourne Cup two years ago–with a 3-year-old, if you please, who had been on the Classic trail in April. And now he has reciprocated the record he owns, as a rider, with the equivalent one as a Breeders' Cup jockey. Moreover he joins Freddy Head, in the 36-year history of the series, as the only other to have scored both as trainer and jockey.

It is hard not to conclude that precisely the same quality that served Joseph so well as a rider–that naturalness he had acquired literally from infancy–is also setting him apart as a trainer. The basics of his profession are within a very wide competence, and you often hear it said that the ultimate differential is only the kind of opportunity that Joseph has been so lavishly afforded by his patrons. Just last week, after all, he was able to give 625,000gns for Summer Sands (GB) (Coach House {Ire}), top lot at the Tattersalls Horses-in-Training Sale. Yet if a horse's career is ultimately determined by the accretion of good decisions, when facing those unreported, daily dilemmas, surely there can seldom have been such an old head on young shoulders to maximise whatever opportunities do fall a trainer's way.

Yes, Joseph has quickly assembled a very big stable. And yes, more seasoned trainers are often treated disgracefully by owners who want to associate themselves with new young stars. But while those owners would typically do far better sticking with experience, Joseph's age represents no measure of his experience. Even in infancy, as his father once disclosed, Joseph probably knew the shape of a horse's face better than he did that of a human being.

And his mother, standing proudly in the winner's enclosure yesterday, agreed that Joseph was applying the same instincts now as he had to his first career. “I suppose you have to have that same feel,” she said. “If you have a feel for horses, then you won't be afraid of the decisions you have to make with them. Joseph's training up the same hill where my dad trained, and where Aidan once trained as well, so this is a great piece of family history for us today.”

Aidan also remarked on the confidence Joseph brings to his decision-making, joking that not only was he receiving fewer calls home, for counsel, but that he would soon have to start putting in the calls the other way, to Owning Hill.

Aidan recalled that the filly's dam Senta's Dream (GB) (Danehill) had actually been pencilled in to visit Galileo (Ire) himself at his own patrons' Coolmore Stud. “But she couldn't get into him that day,” he said. “And so Ruler Of The World was the one of his sons we chose: he's a very well-bred Derby winner, and a very under-rated horse.”

Iridessa, one of just 44 foals in her sire's debut crop, was only sold after breaking her maiden last summer but has now won four times at the elite level–including twice in her only career starts at this distance. She thrived on the pace, which essentially held up well (behind a runaway outsider, at any rate) as it has on both tracks through the two days, and put the home favourite out of the Horse of the Year conversation.

Chad Brown, trainer of Sistercharlie (Ire) (Myboycharlie {Ire}), was relieved that the Europeans couldn't perform a similar disservice to Bricks And Mortar (Giant's Causeway) in the Turf, where Anthony Van Dyck (Ire) (Galileo {Ire}) at least consolidated his renewal by making the frame despite a pretty rough passage.

But while we were able to place a positive perspective on the education of vanquished juveniles, the previous day, yesterday consolations were harder to find. In fairness, this had not looked a vintage party of raiders, certainly without Magical (Ire) (Galileo {Ire}), and so it proved. Interesting to note, however, that some of the exported European horses on the card were able to transfer their class effectively, having had more time to adapt to the local racing theatre.

Uni (GB) (More Than Ready) was the outstanding example in the Mile, where Without Parole (GB) (Frankel {GB}) also looked very much at home, and back to form, in taking third on his debut for Brown. But let's not forget that the Turf Sprint winner, Yorkshire-bred Belvoir Bay (GB) (Equiano {Fr}), laid the foundations of her career with Richard Hannon as a 20,000gns Book 2 yearling.

The bottom line, however, is that all the European eggs turned out to be in the single basket of Joseph O'Brien. Fortunately, he proved to be perfectly home with that onerous responsibility. So long as there are Thoroughbreds involved, Joseph is going to feel at home wherever he is in the world, whatever he is asked to do.

Who can say how much Iridessa owes to her genes, and how much to the environmental influences that are the responsibility of her young trainer? As ever, we know only that it is a mesh of different factors: you just try to make sure that all bases are covered. And you could have no better template, in that respect, than in the breeding and raising of the trainer himself.