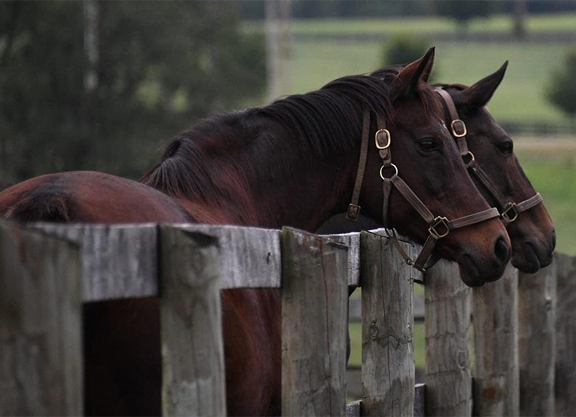 Gold Round, left, and Mystery Trip at Old Friends | Photo by Laura Battles

Represented by Alex Solis II and Jason Litt of Solis/Litt Bloodstock, the Roth family–Larry, Nanci, and Jaime-the owners of LNJ Foxwoods approached Old Friends about securing aftercare options for several broodmares. LNJ has donated the construction of a new paddock as well as stipend for the mares to the non-profit organization, and, in the coming months, will also retire Hi Dubai, a stakes-winning sister to champion Fantastic Light.

“Responsible ownership is the cornerstone of the LNJ operation,” said LNJ's Jaime Roth. “Over a year ago, my family met with Michael Blowen with the idea of creating our own paddock for retired LNJ broodmares to peacefully live out the end of their lives. To now see that concept come to fruition is pretty awesome. Knowing that Gold Round, Mystery Trip, and future LNJ broodmares will be celebrated by visitors while having a retirement haven is invaluable to my family.”

Bred in Ireland by Wertheimer Et Frere, the 23-year-old mare is a half-sister to 14-time Group 1 winner Goldikova.  During her racing campaign in France for two seasons, she captured the 2000 G3 Prix Cleopatre at Saint Cloud and the 1999 Prix des Sablonnets at Nantes. Gold Round was bought by Solis/Litt Bloodstock for LNJ in the 2012 Arqana Breeding Stock sale. Since her purchase, the mare has produced six fillies for the Roth family including Grade III winner Golden Valentine and stakes-placed Golden Attitude and Golden Box.

An unraced 16-year old, Mystery Trip was bred by the Farish Family and Kilroy Thoroughbreds. She is a half-sister to Classic winners A.P. Indy and Summer Squall, and is the last foal out of the bluehen mare. In 2016, Mystery Trip was purchased by Solis/Litt Bloodstock for LNJ at the Keeneland November sale.

“We are always pleased to see such dedicated and responsible owners as the Roth family,” said Old Friends founder and President Michael Blowen. “They are great role models for the industry. The mares are magnificently bred, very sweet, and will be a wonderful attraction for our visitors.”