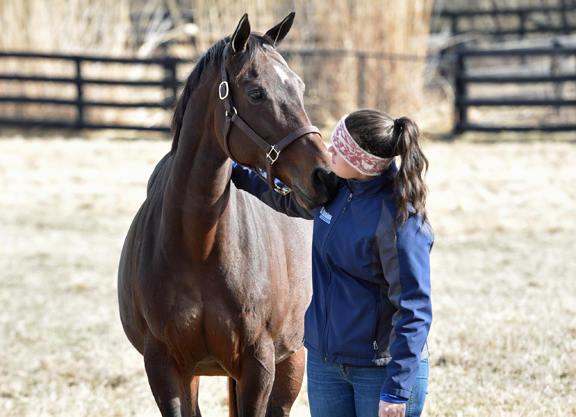 Old Chapel Farm has built a reputation over the last few years as a boutique weanling-to-yearling pinhooking operation, but owner Andrew Motion decided to look for a more diversified investment and took advantage of the opportunity of his daughter Mary's trip to last month's Keeneland January Horses of All Ages Sale.

“My dad has been pinhooking, but now it's just crazy money,”  Mary Motion explained. “He has a broodmare background, so we thought we would get more of a long-term investment out of the mares. I originally went down to the [January] sale to shadow [bloodstock agent] Liz Crow for a few days and my dad said he might send me a list of mares to go have a look at. The plan was just to see what I could see and if there was something that we could afford, than great, but we weren't setting our hearts on it or anything.”

After watching the prices during the first day of the auction, father and daughter reassessed their options.

“He sent me a short list at first, but after Monday it became quite apparent that there would be some horses that we could afford, so then he sent me a very big list. I sort of just paid attention to his list from then on out.”

Motion signed for two mares at the January sale, first going to $30,000 to acquire the 12-year-old Need an Angel (Pulpit) and then paying $20,000 for 11-year-old Deherewego (Dehere). Despite a family history steeped in horses and industry experience on three continents, it was the first time the 24-year-old had signed for a horse in her own name.

“Oh my gosh, it was nerve-wracking,” she admitted with a laugh. “For the first horse I bought, I couldn't spell my name. It was so embarrassing. I didn't realize that I did, but I guess I scribbled it so quickly, they couldn't make out what it actually said.”

Deherewego, due to foal a Cross Traffic baby any day now, is already proving the investment was worthwhile. The mare's 3-year-old daughter O Seraphina (Congrats) finished second behind the highly touted Taraz (Into Mischief) in last Saturday's Martha Washington S. and is expected to make her next start in the GIII Honeybee S. at Oaklawn.

“We were so excited,” Motion said of the stakes-placing. “I couldn't believe it. I have a lot of respect for [trainer] Joe and Rosie Sharp, as well. I was excited for them as well to have a nice up-and-coming filly.”

Of a possible graded stakes win, she added, “Fingers crossed. That would be amazing.”

Growing up in Virginia horse country as a third-generation horsewoman, it seemed inevitable Mary Motion would follow her father or uncle, trainer Graham Motion, into the racing industry. But Motion said her family let her find her own way into the game.

“All of my family is in racing,” she said. “Even my mom, she was more in the steeplechase side. So I grew up foxhunting with Piedmont Hunt and doing hunter shows. It wasn't really until I was introduced to what they used to call the Junior Field Master Chases in Virginia at the point-to-points that I started getting interested in the jump racing.”

Motion spent summer vacations from high school galloping for her uncle at Fair Hill Training Center in Maryland and worked for him full-time while attending college. In between high school and college, she spent a year in England working for trainers like Oliver Sherwood and George Baker. After college, she spent a year in Australia, working for Gai Waterhouse and Adrian Bott, and then Ciaron Maher and David Eustace.

“For Gai and Adrian, I was riding and I was helping with marketing projects and communications,” Motion said. “Just sort of doing bits and pieces of everything with them. Which was a once-in-a-lifetime experience. And then I worked for Ciaron Maher and David Eustace in Melbourne and I mostly rode out for him and did some assistant formanwork for him, so I could see some of the management and ground work side of things as well.”

Motion has also been sharpening her skills in the bloodstock market.

“My first introduction to the bloodstock industry was at Tattersalls in 2014, I had the opportunity to shadow Matt Coleman,” Motion said. “And last year, at the January sale, I worked for Jim FitzGerald and shadowed Marette Farrell.”

She continued, “My family didn't push me at all, but they've always been extremely supportive of whether I wanted to be in jump racing or flat racing, bloodstock, training, whichever part of the business I wanted to be in, they've been very supportive.”

The Old Chapel broodmare band is currently made up of just the two January acquisitions and the plan is to sell the foals as weanlings.

“Possibly next year we'll get some more mares,” Motion said. “But right now it's my dad by himself, so it's just a question of not having too many. If O Seraphina jumps up and becomes a Group 1 winner or something, we'll probably put Deherewego back in the sale. I'm not saying that's definitely going to happen, but if that's the case, we'll probably get another mare.

She continued, “I think right now two is plenty while we are just introducing the farm to the broodmare industry and this is very new at the moment. We just want to get going with it and then maybe next year buy a couple more. It's a very gradual process. We're not rushing.”

While she gains experience across both the globe and the industry, Motion admitted training just might be her future.

“I've always debated whether I prefer bloodstock or training,” she said. “But at the end of the day, there is nothing that I love more than the training side. Graham would give me a couple projects here and there that I would spend all my time working on. Then just making it to the race, let alone winning a race, meant so much to me. So I really enjoy that part of it. I'm still pretty new to the bloodstock and I am definitely getting more interested in that. But I think, as a trainer, you need to have bloodstock experience anyway. So I definitely think I'd be mixing the two, but I think training will probably be my future.”