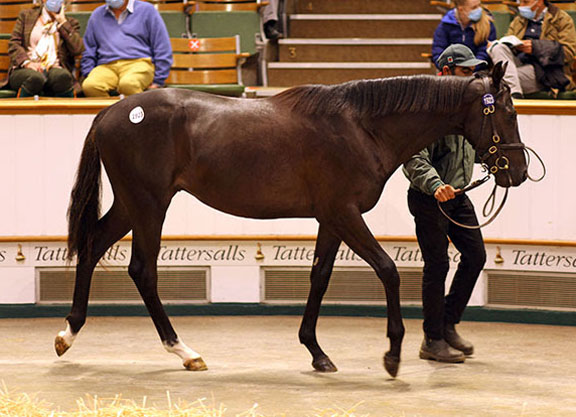 NEWMARKET, UK–So here we are, at the furlong pole, and somehow still hard on the bridle. With just Book 4 to go, the Tattersalls October Yearling Sale continues to confound the gloom generated this year as the bloodstock industry–along with the wider economy–reeled under the nightmarish burden of a pandemic.

For some who arrived for Book 1 last week, of course, even these returns won't have stopped fatigue setting in. But while many of the elite prospectors have by now drifted away, Book 3 always has a rather compelling theatre of its own.

Whatever the state of the market, it's reliably instructive to observe the real judges, picking out something they think has fallen through the cracks; or an equal artistry in the better auctioneers, as they draw out the extra bid or two that can make all the difference, though hundreds rather than thousands, to smaller breeders. After all, everyone knows that one or two nuggets will be turned up every year.

Elliott Jumps To The Top

In much the same spirit, Alex Elliott was justly enthusiastic after topping trade, late in the session, with a 90,000gns son of Authorized (Ire), presented as lot 1923 by the Castlebridge Consignment.

“I love Book 3,” the agent exclaimed. “It's a fun sale that gives you a real chance: you can trawl through those pedigrees, and try and find the sleepers. I bought [listed winner] Dave Dexter (GB) (Stimulation {Ire}) here. I thought this chap would top the sale. It's been a long day waiting for him.”

The colt is out of an unraced New Approach (Ire) half-sister to three stakes winners out of the Group 1-placed German mare White Rose (Ger) (Platini {Ger}). This is a deep family of quality stayers and there will be a corresponding spectrum of opportunity for his new Irish-based owner.

“He's a brother to a 106-rated filly [dual listed winner Scentasia (GB) (Cape Cross {Ire})], so he can obviously go on the Flat,” Elliott said. “Or you could keep him and go the National Hunt route. He has French premiums, too, so the options are endless. But if he is any good he will definitely end up in Cheltenham rather than Melbourne. We love the sire and they're not making them anymore, as it were, unless you're in Turkey. This is a beautiful horse, with a great outlook, who vetted out good.”

Like so many, Elliott has been catching his breath this week. “Everyone thought Book 2 would be a bloodbath,” he said. “But it's all been a bit like Brexit. Nobody expected that either. It was hard, but I was lucky to have some good clients and got some good staying horses.”

Not many yearlings can have raised as much this autumn, per catalogue line, as the Night Of Thunder (Ire) colt who made 46,000gns from James Tate as lot 1839, despite the snowfields extending across the bottom half of the page.

In fairness, it's a family in rapid development: he's the very first foal of his dam, a winner by Rock Of Gibraltar (Ire); and the second dam has had two winners from just three foals of racing age, including one as accomplished as G2 Norfolk S. runner-up Reignier (GB) (Kheleyf). And, of course, Night Of Thunder has made a splendid start regardless.

“Sire power is everything, isn't it?” remarked Eric Cantillon, who consigned the colt from Plumton Hall Stud on behalf of breeder Sean Gollogly. “It was a great price, and Sean is thrilled. But he's a nice horse, the sire's doing well, and I suppose you're better off as a big fish in a small pond at a sale like this than the other way round. We've had the horse since he was weaned, around January time, and we sold Reignier as well. Sean's a very good friend and I'm delighted for them: they just have a few acres down by Epsom Racecourse and it's lovely to see breeders like that doing well.”

“Obviously Night Of Thunder has done incredibly well so we were looking for his stock,” explained Tate. “We thought he was a really lovely example of the stallion and really liked the way he walked around the ring.”

True to the momentum of the week, only the third animal into the ring realized a sum matched just five times in the equivalent session last year. This was lot 1662, a Fast Company filly who caught the attention of Jane Chapple-Hyam at 40,000gns.

Pinhooked only in February (for €27,000 at Goffs by Howson and Houldsworth), this is the first foal of a winning Harbour Watch (Ire) half-sister to G2 Lowther winner Living In The Past (Ire) (Bungle Inthejungle {GB}). She was presented by Keith Harte, who had processed one of the catalogue's joint-top sales in a 130,000gns Churchill filly the previous day. He credited the breeder, Barrettstown Farm House, for also furnishing him with the Starspangledbanner filly he sold for 75,000gns in Book 2.

“This is a straightforward colt, a real 2-year-old type, out of a mare who reached a rating of 90,” Harte observed. “I think Jane just bought him after seeing him walking out here. We were hoping he'd sell well, and this market has been so strong. Everyone has told me that a good horse won't be missed here.”

“He looks racy,” Chapple-Hyam said. “He's for a Hong Kong client I've had for 20 years, Mr. Gordon Li, so he'll start in England and hopefully we can get him to a rating high enough to end his career in Hong Kong. I'll do my best, anyway.”

Chapple-Hyam added that she will be targeting the G3 Nell Gwyn S. for Saffron Beach (Ire) (New Bay {GB}), duly keeping her to the course and distance of both her impressive debut and last week's success in the G3 Godolphin Lifetime Care Oh So Sharp S.

“Fingers crossed for a good winter,” she said.

Saffron Beach's sire was picked as the 2018 mate for a very well-bred mare in Bellwether (GB) (Three Valleys), whose dam Heat Haze (GB) (Green Desert) is one of five elite scorers out of the broodmare legend Hasili (Ire) (Kahyasi {Ire}) in addition to Dansili (GB) (Danehill), the sibling who somehow never won a Group 1. New Bay himself, of course, was bred by Juddmonte, from whom Rosemont Stud bought Bellwether for 50,000gns at the 2018 December Sale here.

The resulting filly duly brought something of a Book 1 page as lot 1696, if not quite a Book 1 price as Rabbah Bloodstock was able to secure her for 42,000gns. “A nice filly by a very exciting young stallion,” said Rabbah's Jono Mills. “Dubawi (Ire) looks like he's becoming a fabulous sire of sires.”

The filly was presented by the National Stud, whose director Tim Lane remarked, “We've had a good week–trade has been amazing. Long may it last. It's the biggest draft of yearlings we have sold for a long time and we've been very lucky.”

The National Stud is itself standing another son of Dubawi from the Juddmonte programme in Time Test (GB), and his first yearlings continue to perform well in the ring. Indeed, he accounted for two of the top seven prices of the session. Nick Bradley gave 45,000gns for his daughter of an unraced Canford Cliffs (Ire) mare, herself out of a half-sister to G1 Coronation S. winner Maids Causeway (Ire) (Giant's Causeway). The filly was presented as lot 1807 by the Castlebridge Consignment on behalf of breeder Lady Richard Wellesley.

Further back this is the good Wildenstein family of Verveine (Lear Fan), but Bradley felt that a thin page under the first two dams had been a decoy.

“The pedigree put her in this catalogue, but she was Book 1 as a physical,” he said. “I didn't want to have to give quite so much for her but Federico [Barberini, underbidder] is a good judge and if I'm on one, I tend to find he is on it too–and unfortunately he made me pay. On another day I might have got her five grand. But she has a belting physique, and was my pick of the sale. She'll be going to Richard Fahey. The two first-season sires I really like are Time Test and Churchill (Ire).”

Bradley was in buoyant spirits, with his syndicate business thriving. “Things are flying,” he said. “I got 12 deals done yesterday and 12 the day before.”

His emphasis is very much on fillies, not least with the Great British Bonus in mind. “I own 22 fillies and not one colt,” Bradley said. “My theory is that if I won the Dewhurst, it would have to be by a fashionable stallion and then I'd need to be selling the horse on–and then the owners would say, 'Why are you trying to sell?' If we won the Cheveley Park or the Fillies' Mile, the value will be there all the time; I won't be in a rush to sell, and the owners can live out their dreams. The bonus helps as well. We complain about prizemoney but there's 20 grand there for winning a race.”

Tim Lane pronounced himself “delighted” by the reception of Time Test's first crop. “A good stallion stamps his stock and that's just what he has been doing,” he said. “They have great minds, they have the Dubawi middle and that bit of swagger. And he's fully booked in New Zealand.”

Time Test's son out of Royal Ascot-placed juvenile Excello (GB) (Exceed And Excel (Aus}) made 40,000gns to Heels Bloodstock through his home farm consignment as lot 1751. His third dam ties into another world-class outfit as a half-sister to the Wertheimer champions Pas De Reponse (Danzig) and Green Tune (Green Dancer).