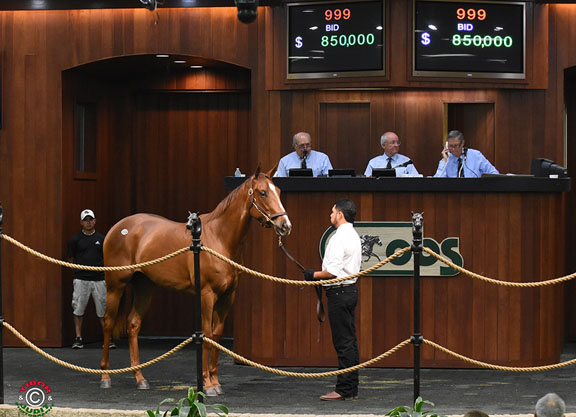 OCALA, Florida – The Ocala Breeders' Sales Company's Spring Sale of 2-Year-Olds in Training produced a record average, median and gross as it concluded with a fourth session in Central Florida Friday.

“It was exciting because we had strength from beginning to end and in different price ranges,” said OBS Director of Sales Tod Wojciechowski. “April has proven itself to be the one-stop shop of 2-year-old sales. And it seems to grow every year. I think it has to do with the success of the horses we've seen around the world. Horses that come out of here have proven themselves on the track and I think people appreciate that. Ultimately, they want to go where they can go where they can buy a good horse.”

The April sale, which had two previous million-dollar sales in its history, produced three seven-figure transactions, including the sale-topping $2.45-million colt by Tiznow consigned by Bobby Dodd and purchased by M.V. Magnier.

Buyers found plenty of competition this week in Ocala, particularly in the middle market which has been weak at recent auctions.

“I think the market is very strong,” said Linda Rice, who signed the ticket at $850,000 for Friday's session-topper, a filly by Creative Cause (hip 999). “Everybody wants a nice horse. It's a bit chicken or feathers, but I see a lot of horses that I would have considered middle-market horses that the buyers are really interested in picking up. What I am seeing is that there is a lot of enthusiasm for racing.”

Bloodstock agent David Meah was busy on both sides of the ledger and found it hard to buy many of his picks.

The sale's leading consignor was Ciaran Dunne's Wavertree Stables with $4,085,000 collected on 36 sold.

“There were certainly a lot of people who said it was difficult to buy here this week,” he confirmed. “And as they left, they said, 'I'll see you in June.' So I believe it will help us for June.”

Another OBS Score for Solana Beach

A year ago, Solana Beach Sales, a pinhooking partnership led by Billy Koch, put a colt by Broken Vow through the sales ring at the OBS April Sale. The youngster, purchased at the Keeneland September Yearling Sale for $105,000, was the April topper when bringing a final bid of $1.2 million from Breeze Easy. The partnership returned to Ocala Friday with a filly by Creative Cause. That chestnut, a $100,000 purchase at Keeneland last fall, sold for $850,000 to the bid of trainer Linda Rice. She was consigned by Tom McCrocklin.

“She had a lot of interest, but you just don't know,” Koch said. “You don't know what to expect and you don't want to set your expectations too high. Tom and his team deserve all the credit.”

Asked about the filly's appeal as a yearling, Koch said, “We just loved her and we took a shot with Creative Cause.”

Out of stakes winner Santina Dond (El Prado {Ire}), hip 999 has blossomed in Florida this winter, according to Koch.

“She just grew into a beautiful filly and people had trouble faulting her,” he explained. “The key is the last six months she spent with Tom and his team here in Ocala. She turned in a wonderful breeze (:21 flat) and she is just an absolutely beautiful filly. I'm just so happy for the people who invested in her.”

Koch, founder and managing partner in the Little Red Feather Racing Club, which has campaigned Grade I winners Singletary, Egg Drop and Midnight Storm, said the Solana Beach Sales partnership is another way to get investors involved in the industry.

The pinhooking opportunity has proven popular with his investors.

“This year we had 11 [yearlings] and last year we had six,” he said. “Next year, hopefully we'll have more because a lot of people really enjoy the process and it's a lot of fun.”

Rice Wins Out on Creative Cause Filly

Trainer Linda Rice had been keeping a relatively low profile through the first three days of OBS April, but she made her presence known during Friday's closing session, coming out on top of a spirited bidding war with bloodstock agent Donato Lanni to take home a Creative Cause filly for $850,000.

The New York-based conditioner, who tied with Rudy Rodriguez for leading trainer of Aqueduct's spring meet, signed the ticket for hip 999 on behalf of Kaitar Racing. That name also appeared on the ticket of $900,000 2015 OBS April grad Seymourdini (Bernardini), who romped by 12 1/4 lengths in his seasonal bow for Rice at Laurel Mar. 25.

“She's a big scopey filly, good size, good shoulder,” commented Rice, who did her bidding on the phone from one of the OBS offices. “She went in :21 flat and galloped out terrific. She looks like a two-turn filly with speed. She had a good presentation at the barn.”

Rice expected the filly to command a big purchase price. Her $850,000 price tag was the highest yet for an offspring of Creative Cause.

“Honestly, I wasn't [surprised] based on what I saw here this week,” the conditioner offered. “Yesterday we tried to buy a Union Rags colt [Hip 899] that brought a million. People want a nice horse clearly.”

Rice added, “There was a nice Creative Cause filly, hip 262, that went for $575,000 that was sold by Eddie Woods. She was really magnificent as well. We tried to bid on her also, but didn't get her bought.”

Hip 999 was bred by Brereton and Bret Jones, whose Airdrie Stud stands her young sire Creative Cause for a fee of $15,000 this term. His first crop is currently 3-year-olds, including two-time stakes winner Twisted Tom, victor of last weekend's Federico Tesio S. at Laurel.

Rice purchased five other horses this week and two of them were colts by Creative Cause. She went to $320,000 for Hip 392who worked in :10.2 and hails from the family of undefeated GISW and 'TDN Rising Star' Mastery (Candy Ride {Arg}) and GSW/GISP sire Jump Start (A.P. Indy). The daughter of late pinhooking pioneer Clyde Rice also signed the $200,000 ticket on Hip 25, a :10.1breezer out of GSP Visavis (Indian Charlie).

“I was beaten in the Federico Tesio last week by a Creative Cause named Twisted Tom and I bought two colts by the same stallion, not by intent, frankly,” Rice remarked. “They just presented themselves well at this sale. I am trying to buy horses that look like two -turn horses, Classic distance colts. Obviously this is a filly, but she looks like she will definitely run two turns.”

She continued, “[Creative Cause] is from a nice family. He's a full-brother to [MGSW and GI Belmont S. runner-up] Destin, so I think it is a good female family.”

Consigned by Tom McCrocklin, the chestnut filly is out of Santina Dond (El Prado {Ire}), who raced in Poland. This is also the family of GSW and GISP millionaire Zivo (True Direction) and GSW Patton's Victory (Patton). She was purchased by Solana Beach for $100,000 at last term's Keeneland September sale.

A mare named Rivertown Belle (Bellamy Road) made a lasting impression on Carrie Brogden when she sold her as a weanling, so much so that she just had to buy her daughter by Awesome Again as a weanling. That filly became so special to the horsewoman that she stayed in on the youngster when she was resold as a yearling and the dark bay (Hip 968) brought things full circle for Brogden when selling for $525,000 to trainer Jeff Mullins, who was bidding on behalf of Michael Cannon.

“Her price has overwhelmed me,” an elated Brogden said after thanking Mullins. “I thought she'd bring $300,000. Quincy and Jenn [Adams, who consigned the filly through their Q Bar J Thoroughbreds LLC] did a fantastic job as always. They told me the whole time she was the real deal.”

Brogden continued, “The way she moved and the way she carried herself, sometimes I am wrong, but she was just special. Quincy calls in February and says, 'You aren't going to believe this, but I think the best filly in our group is the Awesome Again filly.' She represented exactly what she was here today and exactly what her mother was. It's amazing how it all comes full circle.”

Pro Partners, a weanling to yearling pinhooking partnership headed by Brogden, purchased the :10 flat breezer for $135,000 as a Keeneland November weanling.

“We sold [Rivertown Belle] as weanling [for $25,000] for breeder Deann Baer and she went on to be a stakes winner,” recalled Brogden, who operates Machmer Hall Farm with her husband Craig and mother Sandy Willwerth and is also a partner in Kentucky-based Select Sales. “The mother was gorgeous and she comes back into the [Keeneland] November sale in foal to Awesome Again and I was the underbidder when Tom Ryan bought her [for $170,000] for SF [Bloodstock]. Then I see the foal and I'm like, 'Oh my God, the foal is incredible.' I bought her [as a weanling] as part of our foal partnership.”

Brogden liked the filly so much that she put together a new partnership to buy the then-yearling for $100,000 when she went through the ring at Keeneland September the following year.

“She was our last horse to sell from our group at the yearling sale and I knew she didn't have the action to kick off of [weanling price],” Brogden explained. “I sent my client at Haymarket Farm a text and said, 'There is a filly here off my farm that I think is going to be one of the most special horses I've ever raised. She's selling as a yearling tonight and she has to sell. Do you want to buy her and I will retain a piece?' He said yes. I took 40% and our partners Dan and Jane Hoffelin, who have raced successfully with Jerry Hollendorfer, were the only ones from the original weanling to yearling partnership who stayed in.”

Bred by SF Bloodstock, hip 968 traces her lineage back to Horse of the Year Holy Bull and GISW Sweet Symphony. She is the first foal out of Rivertown Belle, who was most recently bred back to Awesome Again. —@CDeBernardis

Hip 1205, a colt by Scat Daddy, was the third-to-last horse through the ring Friday at OBS, but proved worth the wait when selling for $400,000 to Emmanuel de Seroux's Narvick International. The bay juvenile, who worked in :10 flat, was a $100,000 buy for California-based B G Thoroughbreds at last year's Keeneland September Yearling Sale.

“I think it was a good result,” bloodstock agent David Meah, representing the sellers, said after the transaction. “Anytime you turn $100,000 into $400,000 in seven or eight months, it's a good result. So we're happy with that.”

The colt is out of Trusty Lady (Deputy Minister) and is a half to graded stakes-placed Trendy Lady (Unbridled's Song). He was consigned by Harris Training Center.

Of the colt's appeal as a yearling, Meah said, “It's the last season of horses by Scat Daddy and this one looked like a horse that would go and look like a good horse in April. We thought we might send him to March, but we thought he could be a star in April. He trained really well over the winter and never had a setback. I think he was really well bought for $400,000.”

The colt was one of three targeted for the April sale, according to Meah.

“I bought three for them to come here,” Meah said. “This is the only one who made it through the process, but he paid for the whole thing, so we'll go back to September and do it all again.”