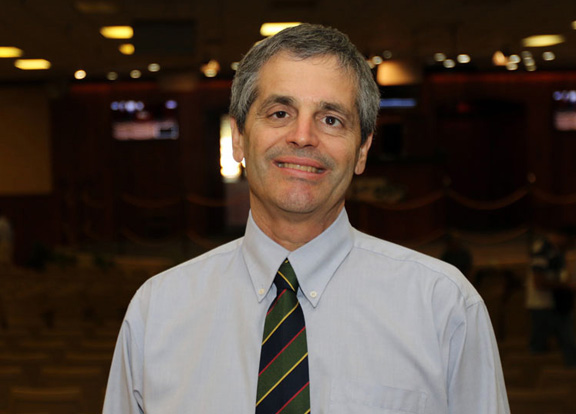 As president of the sale company that conducted the final auction before the coronavirus pandemic shut down society as well as the first one after restrictions were lifted, OBS’s Tom Ventura has had to learn on the fly. Wednesday, he joined the TDN Writers’ Room podcast presented by Keeneland to offer his advice for the rest of the industry on keeping business going amidst COVID-19 and his impressions of the rebounding sale market.

Calling in via Zoom as the Green Group Guest of the Week, Ventura said of the lessons gleaned through the pandemic, “One of the things that we learned real quickly, that you had to be pretty flexible and be able to adapt on the fly. There were restrictions coming down the pike, literally, as we were about to hold the March sale … As things were tightening up, it became very hectic, almost on an hourly basis as things were being changed. So we met with the local government officials and we got the advice, at the state level, what things were being required and what we could do. It was still feel your own way, because there wasn’t a lot of dramatic restrictions that were being put in place.”

Ventura noted that while phone bidding was ramped up for the March sale, the key to pulling off the delayed April sale in June was the incorporation of online bidding, something that will likely be a permanent feature in the auction world going forward.

“As we had to ramp back up for June, we put the online bidding into overdrive,” he said. “That was in play in terms of something that we wanted to get done, but it got moved to the head of the class real quick. And I really have to appreciate the work that [Tampa-based software company] Xcira did, because from OBS’s perspective, it’s obviously a super high priority for us. We were able and willing to work 24/7 to get it up and running for the spring sale and fortunately, Xcira jumped in right there with us to get it up. Now, it worked. I thought it was very good. It doesn’t have all the bells and whistles that it will down the road, but it certainly [did the job].”

Things looked ominous for both the racing and sales worlds at the beginning of the COVID-19 pandemic, but tracks resuming operations and positive results from Fasig-Tipton Midlantic this week suggest a rebound is underway. Ventura agreed that the mindset has changed and pointed to the upcoming OBS July sale as another barometer for the industry.

“The [July] sale, we’ll get a real true test of the depth of the market. We have another thousand horses on the market,” he said. “I’m hopeful, and I think based on our sale and the Fasig-Tipton sale, they held up pretty well comparatively, and they had a lot of participation. I think the other thing that’s going to benefit us now is that all the racetracks for the most part are up and running. There’s a positive frame of mind now, compared to March, as we were just in the beginning of this, as things were shutting down.”

Elsewhere on the show, in the West Point Thoroughbreds news segment, the writers recapped Fasig-Tipton Midlantic and expressed concern about the vague safety protocols announced for the GI Kentucky Derby. Later on, in light of the number of top horses who have dropped off the Derby trail, they each picked one supplemental horse for their 3-year-old fantasy stables. Click here to listen to the podcast and click here to watch it on Vimeo.