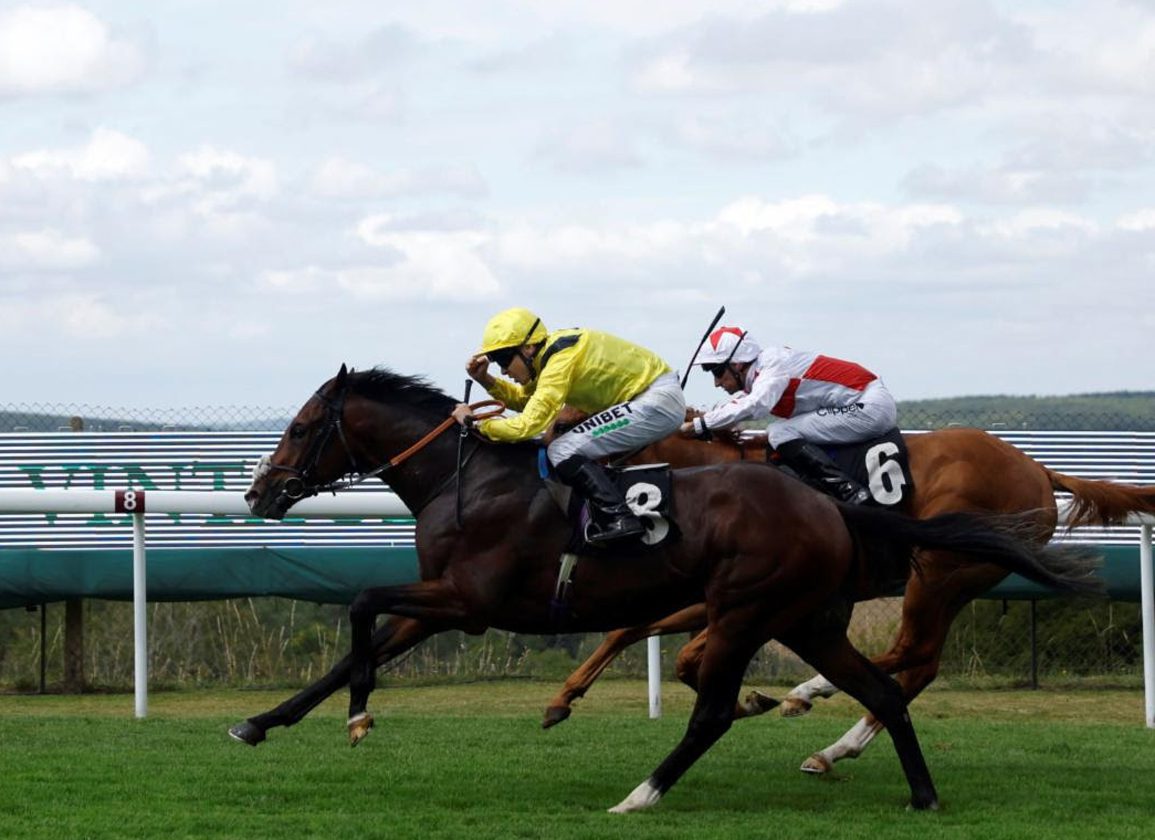 Successful in two of his first three outings, Sheikh Ahmed Al Maktoum's Marbaan (GB) (Oasis Dream {GB}–Zahoo {Ire}, by Nayef) belied odds of 14-1 to claim a career high on stakes debut in Tuesday's G2 Japan Racing Association Vintage S. at Glorious Goodwood. The March-foaled bay opened up with a May 22 third to the reopposing Dark Thirty (Ire) (Straspangledbanner {Aus}) going six furlongs at Newbury before streaking to a five-length tally over the same trip at Nottingham in June and embellished his win column with a half-length score when upped to seven furlongs at Salisbury earlier this month. The eventual winner was steadied in rear after an alert getaway from the outside stall. Easing closer in the straight, he was shaken up approaching the final furlong and quickened smartly in the latter stages to deny Royal Ascot's Listed Chesham S. hero Holloway Boy (GB) (Ulysses {Ire}) by a half length nearing the line.

“We have always thought a lot of Marbaan and it was a real boost over the winter to be sent horses by Sheikh Ahmed Al Maktoum,” revealed Charlie Fellowes. “He was a really good-looking yearling who has just progressed and progressed and we put him in at the deep end today. We've had a rough season, but to have a winner at Goodwood for such an important owner on a wonderful day of racing is phenomenal. It means a huge amount to me and the team who have worked unbelievably hard, and it was a wonderful ride from Jamie [Spencer]. Training at the moment is as difficult as it ever has been, there is a lot of competition and a lot of talented young trainers coming through as well. This for some reason has been a hard year for us, but all credit to the team who have kept on delivering and hopefully we can have a big second half of the year. I genuinely have no idea where we will go and I will sit down and take a breath.” Looking ahead, the trainer added, “I put him in the [G2] Champagne S. this morning and he is in the [G1 Vincent O'Brien] National S. in Ireland. There are lots of lovely options for him and he now warrants a trip anywhere. I will speak to Sheikh Ahmed and his team and see where they want to go.”

“Marbaan has always been a smart horse and I liked him from the first time I sat on him,” said Jamie Spencer. “My only fear today was the [outside] draw and, to be fair to Charlie, he said to take our medicine rather than trying to go forward and get in. We would rather him coming home, instead of being stuck on the outside and learning nothing. I knew down by the three-furlong pole that I was running away and Danny [Tudhope] on Holloway Boy was starting to squeeze, so I just timed my run. Marbaan is a gorgeous looking horse and I'm sure he'll stay a mile. He has progressed with each run and needs to progress again. You would think physically he should do so and it's down to Charlie and his team. I'm sure the autumn races will be there for him.”

Reflecting on the performance of Holloway Boy, Karl Burke commented, “Holloway Boy ran really well. He got messed around a little bit in the run early doors, which didn't help, and he has pulled a front right shoe off as well, which again wouldn't have helped him. But from three out, no excuses, the winner just had a little bit more turn of foot. Danny [Tudhope] says he feels like a top-class horse. He has a great cruising speed, although he just lacks that little bit of speed at the important end of the race. He's run a great race and all credit to the winner for cutting us down.”