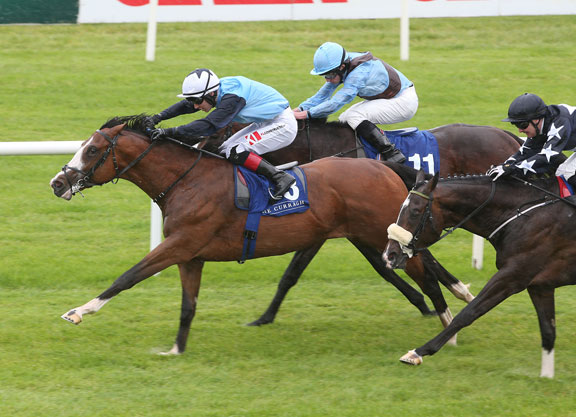 +GOBI DESERT (GB) (c, 2, Oasis Dream {GB}–Household Name {GB}, by Zamindar), was steadied to raced under cover behind the leaders in sixth after breaking alertly in this fascinating newcomers' heat. Pushed along to close approaching the final quarter mile, the well-backed 3-1 favourite launched his challenge at the eighth pole and was ridden out in the closing stages to prevail by a half length from Threeandfourpence (War Front). “I'd like to have started him over six [furlongs] and he got tired in the last furlong [here],” revealed trainer Ger Lyons. “He has a bit of quality about him and will be a nice horse for the future if I still have him. He's a horse that we like and he likes the [soft] ground, but will handle better. I'll concentrate on six [furlongs] until he tells me otherwise and there is a winners' race at Naas which is on the agenda. He's a nice, straightforward horse and has plenty of stamina on the dam line.” Kin to a yearling filly by Frankel (GB) and a filly foal by Dansili (GB), he is the first winner produced by a half-sister to five black-type performers which include G1 Prix du Cadran-winning sire Reefscape (GB) (Linamix {Fr}) and MGSW sires Martaline (GB) (Linamix {Fr}) and Coastal Path (GB) (Halling). His second dam Coraline (GB) (Sadler's Wells) is a half-sister to G1 Irish Oaks heroine Wemyss Bight (GB) (Dancing Brave), herself the dam of MGISW sire Beat Hollow (GB) (Sadler's Wells). Sales history: 95,000gns Wlg '15 TATFOA; 100,000gns RNA 2yo '17 TATBRE. Lifetime Record: 1-1-0-0, $12,679. Video, sponsored by Fasig-Tipton.