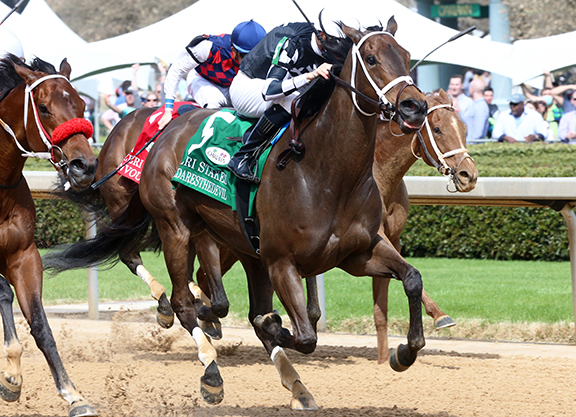 GI Kentucky Oaks victress Shedaresthedevil (Daredevil) made her seasonal bow a successful win with a gritty victory in Oaklawn's GII Azeri S. Saturday. Dispatched as the 9-5 second-choice behind MGSW Letruska in this five-horse affair, the bay caught a flyer from the outside stall and was unchallenged on the front end through a :23.93 first quarter. Still on cruise control under Florent Geroux through a :47.79 half-mile, she was confronted by Letruska and Envoutante (Uncle Mo) to her outside with five-sixteenths left to run. Edging clear of her pursuers exiting the bend, Shedaresthedevil was challenged once again by a determined Letruska out in the four path, but the Oaks winner refused to be denied, gutting out a head victory over the chalk.

“She's a fighter,” said winning trainer Brad Cox. “I thought she may be getting a little tired. Florent did a good job staying after her down the lane and she able to hold that other filly [Letruska] off. A very good filly that she held off. Hopefully, we can move forward off this. She was really sharp in the paddock, kind of showing her hand that she was wanting to go and then Florent did a good job, just letting her settle in the post parade and then she broke. Couldn't take away what came easy. I think he just took control of the race and it worked out well.”

“We caught a flyer out of the gate,” Geroux said. “I was expecting Letruska to lead all the way. I don't know if she didn't break fast enough or stumbled, but we inherited the lead and I just took it from there. My filly is extremely talented. You know you want to slow her down, just keep her in a nice rhythm. Turning for home, she gave me everything she had. She maybe got a little bit tired down the lane, but it was good for her first race off the break. I don't think she was 100% cranked up for this. We have hopes for a big year with her.”

“Whenever I run here, I'm nervous,” Staton Flurry of Flurry Racing said. “I expected the three [Letruska] to break good, but she didn't. We just went on with it. She really dug in. Florent rode a great race. I'm glad to have her back. It's going to be a fun year.”

Starting her career with trainer Simon Callaghan and owners Glencrest Farm and Qatar Racing, Shedaresthedevil was purchased by Flurry Racing Stable for $280,000 at the 2019 Keeneland November Sale and Qatar Racing stayed in for a piece. Transferred to Brad Cox, she checked in second to next-out GII Fair Grounds Oaks winner Bonny South (Munnings) in an Oaklawn optional claimer last February–after which Big Aut Farms bought in–and took the GIII Honeybee S. there a month later.

Third behind champion Swiss Skydiver (Daredevil) in this venue's GIII Fantasy S. in May, the bay romped in a Churchill optional claimer the following month and dominated in the GIII Indiana Oaks July 8. Dismissed at 15-1 in the Kentucky Oaks on the First Friday in May, Shedaresthedevil out-footed a pair of Eclipse winners, denying Swiss Skydiver by 1 1/2 lengths with Gamine (Into Mischief) in third. Favored against older horses in Keeneland's GI Juddmonte Spinster S. Oct. 4, she set the early pace, but gave way late to be third to Valiance (Tapit).

Shedaresthedevil is one of two Grade I/graded winners for her sire Daredevil with the other being Swiss Skydiver. She is also one of five stakes winners for the young stallion, who was recently repatriated from Turkey by Lane's End. The 4-year-old filly is one of three graded victors and nine black-type scorers out of a daughter of Congrats. She is bred on the same More Then Ready/A.P. Indy Cross as MGSW Hungry Island. The winner's dam Starship Warpspeed is also responsible for the unraced 3-year-old filly Jemison (Outwork), a $150,000 Fasig-Tipton July acquisition by Crow-Sharp ventures; a juvenile filly named Blackheartedgypsy (Speightster), purchased for $50,000 at KEESEP by Flurry Racing Stables ; and a yearling filly by Exaggerator. She was bred back to Uncle Mo. Shedaresthedevil hails from the family of GSW & MGISP Crafty C.T. (Crafty Prospector).