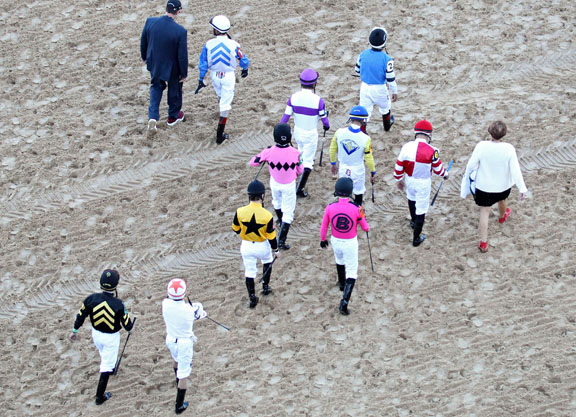 As one of the few remaining tracks still running races during the COVID-19 pandemic, Oaklawn Park has put jockeys and horsemen on notice that ship-in restrictions will be tightened in advance of the track’s upcoming graded stakes races in April and May, which annually bring an influx of shippers to Arkansas.

Ship-in jockeys must be named on a stakes mount in order to be cleared for riding on that day’s card, and they will be denied access to both the backstretch and the main jockeys’ quarters as part of health precautions designed to minimize the spread of coronavirus.

Those ship-in riders must utilize a separate, quarantined changing area that will not have a shower or sauna. And if a jockey wants the services of a valet, he or she must make separate arrangements to hire one.

Those restrictions were listed on the Oaklawn overnight for the Apr. 10 races. The policies are explained below in greater detail:

“Jockeys coming to Oaklawn named in stakes races will not be allowed to access to the backside and will need to report to the health screening desk by the American Pharoah statue upon arrival the day of the stakes race. The rider will be escorted to the quarantine area where they will remain until an Oaklawn Security Guard escorts them to the paddock for the race they are entered to ride.

“The quarantine area will have restrooms, TV and food but will not have a shower, hot box, etc…” the notice continues. “At the paddock they will be weighed at the winner’s circle scale with their tack then escorted to the horse they will ride. When the race is over, the valet MUST sanitize that saddle before it is brought upstairs to the jocks room. The rider is then escorted, by the Oaklawn Security Guard, back to the quarantine area. The rider is asked to take all their belongings with them and exit the premises without having any contact with anyone else.”

Those health protocols are in addition to an Arkansas Department of Health mandate that has been in effect since Mar. 30 that reads, “Travelers from New York, New Jersey, Connecticut, Louisiana, or outside the continental U.S. … are required to quarantine outside these Designated Areas for a minimum of 14 days prior to being allowed” on the grounds.

“There are a lot of places doing that. It’s not just at Oaklawn Park,” said John Beech, a regional director for the Jockeys’ Guild whose territory includes Arkansas.

Beech deferred further comment to Terence Meyocks, the Guild’s president, but TDN could not reach Meyocks prior to deadline for this story. “That was an agreement struck with Mr. Meyocks, the riders, and the management there, I understand,” Beech said.

“2) Otherwise, horses from other states are allowed to be sent to trainers currently stabled on Oaklawn grounds for allowance and maiden special weight races, with permission from the Racing Secretary. However, no trainer, assistant or groom from outside Arkansas will be allowed in or on Oaklawn grounds with the horse.

“3) Trainers are allowed to send horses to Oaklawn who are going to take part in Oaklawn’s 2020 Stakes program with permission from the Racing Secretary.

These stakes horses may be accompanied on Oaklawn grounds by the trainer or assistant trainer only–no groom is allowed,” provided the same 14-day Arkansas Department of Health mandate (listed above) is followed.