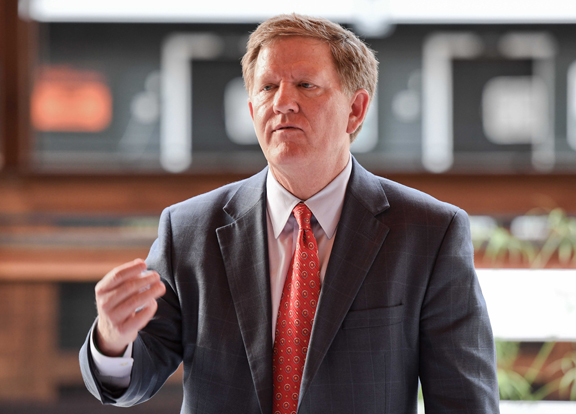 SARATOGA SPRINGS, N.Y. – During its annual legislative review program Thursday evening, the National Thoroughbred Racing Association said that the comprehensive tax law passed in 2017 has already been a positive for the racing industry.

NTRA President and CEO Alex Waldrop hosted the meeting at the Fasig-Tipton sales grounds and featured a presentation by Greg Means, of the Alpine Group, the Washington D.C.-based firm which has represented the association for 15 years. Waldrop and Means said the industry is still learning about how the wide-ranging, business-friendly tax bill will impact racing. One of the key provisions allows for the 100% depreciation of horses, farm equipment and other depreciable property in a single year–rather than over three years–through 2022.

“I think you cannot underscore how important it is,” Waldrop said. “I’m going to hazard to say that may have had something to do with why they had such a gangbuster sale here earlier this week. People can buy and depreciate the entire cost of the horse the year they purchased it. That is a huge benefit. It’s not a permanent benefit, but it is there and it’s something to take advantage of.”

Waldrop said that the tax law, the September 2017 change in how wagers are defined by the IRS and the Department of Treasury, a strong economy and a Triple Crown win by Justify have contributed to a growth in betting handle. He said that handle is on track to finish above $11 billion for the first time since 2010. The NTRA and Means’s firm had been working for a decade on updating how the IRS and Treasury approached multi-horse and multi-race wagers, which are now such large part of the betting menu at race tracks.

“There are probably a number of factors that go into increased handle, but we think that a change in the tax law on withholdable and reportable tickets is a significant contributor to that, as it reduces the churn at the track. It’s a huge, huge win for us. That’s done.”

Means said it is still a bit early to completely understand how the new tax law will affect the horse racing business.

“I don’t know all of the details of that yet, but what we have been able to glean, they look to be quite favorable and to try to get those pass-throughs at something closer to the corporate rate of 21%,” he said. “So we’re optimistic at this point that the new rules are going to be beneficial to those of you who buy or own equines.

The three-year depreciation rules that where passed in 2008 have gone away, Means said, but that there is interest in having that brought back as an accounting option. He said that is firm is working to have that be part of tax legislation, but was not optimistic that it would happen this year.

Noting other more pressing matters, Means said he does not expect any legislative reaction to the Supreme Court decision in May that gives the autonomy to states to determine whether to legalize sport betting New Jersey promptly did.

“I think there was a lot of anticipation that there would be a big skirmish on the Federal level in Congress about sports betting,” he said. “There may still well be that. But for the balance of this year, however, I don’t see Congress taking up a sports betting issue or a sports betting bill, for several reasons. The primary reason is just the macro calendar of the Congress. This is an election year, so that has people kind of pre-occupied on trying on keep their jobs. Self-preservation is strong motivation and that’s evidenced nowhere better than the Congress, so we have that.”

In addition, Means said the U.S. Senate will be focused on the Supreme Court confirmation hearings for Brett Kavanaugh.

The NTRA and the Alpine Group have had some success dealing with a problem this year when some large banks would not allow its customers to use credit cards to fund advance deposit wagering (ADW) accounts. Means said that Chase reversed its stand, which was a major breakthrough, but that Wells Fargo and Bank of America are among the banks that still have restrictions on using credit cards with ADWs.

“We are optimistic that a couple of other banks with which we have the same policy, we’re trying to get to make these changes,” Means said. “It’s very much at the top of our agenda to get a couple of these other large banks’s credit card operations to be able to process our transactions.

Another recent issue that has arisen, Means said, was restrictions on advertising put in place by Google.

“We’re trying to learn some more about that,” he said, “but I think that there is a similar approach that we can make there with some of our friends in Washington to explain to the industry how important we are, that we’re legal, that we’re not some mob bookmaking outfit from 1961.”

Waldrop and Mean said that immigration visa issues remain a problem for the racing industry since the temporary foreign workers on the backstretch need H-2B visas–which have an annual national cap of 66,000 people across all industries. However the H-2A visas for temporary foreigner workers in agriculture, are not capped.

“Ultimately, our goal is,” Waldrop said, “to get our workers treated as agriculture workers and get them under the auspices of the Agriculture Department and away from the Department of Labor, where there are very unfriendly rules on labor. Agriculture would be very friendly to us. Any time we can move from Labor to Agriculture, it is good for the business because they are our friends. They understand our business. We are, after all, an agribusiness.”