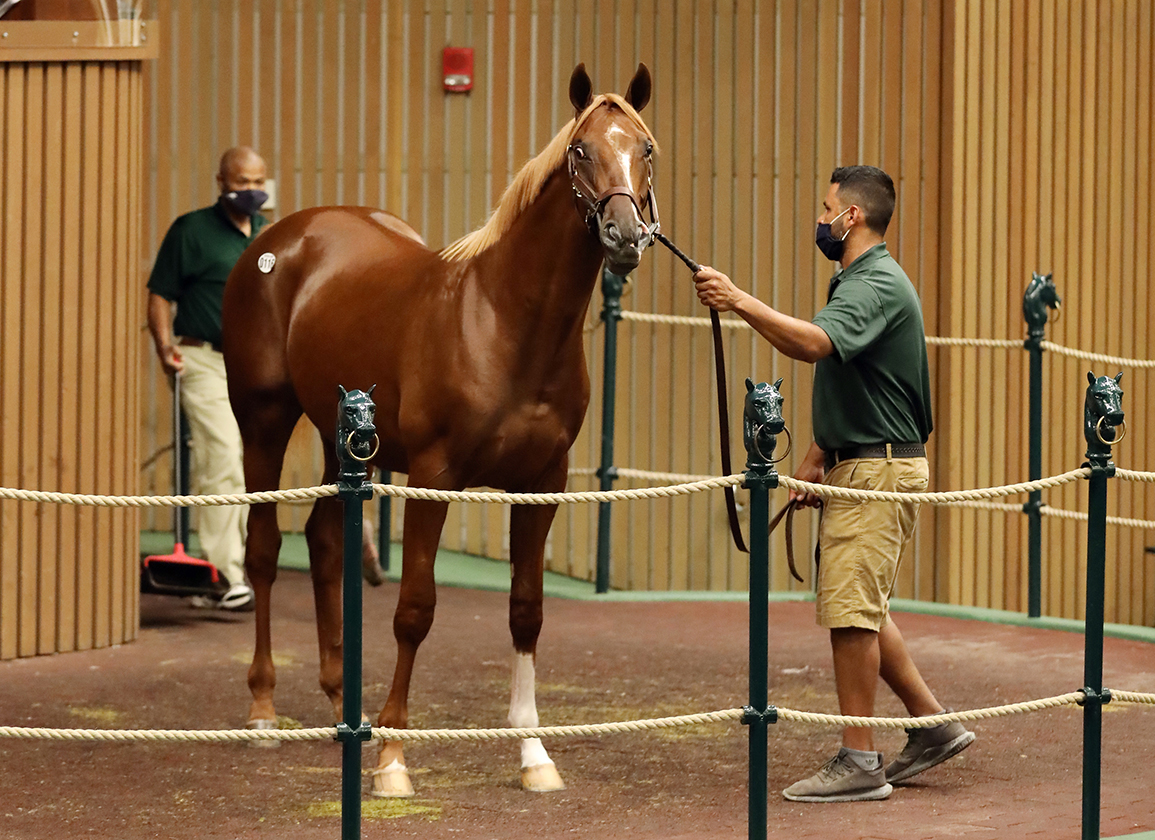 In this continuing series, we take a look ahead at US-bred and/or conceived runners entered for the upcoming weekend at the tracks on the Japan Racing Association circuit, with a focus on pedigree and/or performance in the sales ring. Here are the horses of interest for this weekend running at Hakodate and Niigata Racecourses:

Saturday, July 24, 2021
1st-HAK, ¥9,680,000 ($88k), Maiden, 2yo, 1800mT
FIFTY CHEVY (c, 2, Tapit–Stopchargingmaria, by Tale of the Cat), a debut fourth going this distance at Tokyo June 13 (video, gate 2), attracted a final bid of $825K last fall at Keeneland September from Yuji Hasegawa, the same owner who gave $1.5 million for Vanishing Point, a full-brother to two-time Eclipse Award winner Unique Bella, at the same auction 12 months prior. Winner of the 2014 GI CCA Oaks and GI Alabama S. for owner Mike Repole, Stopchargingmaria was a $3.15-million buyback at that year's FTKNOV sale before being purchased privately by Louise and Kiki Courtelis' Town and Country Farms. Upset winner of the 2015 GI Breeders' Cup Distaff, the mare remained in training through her 5-year-old season and was knocked down to Three Chimneys for $2.8 million at FTKNOV in 2016. She was most recently acquired by Whisper Hill Farm for $4.4 million with this foal in utero at the 2018 FTKNOV sale. Three-year-old filly Stillchargingmaria (Pioneerof the Nile), a $1.9-million graduate of FTKNOV and her dam's first produce, won her maiden at Lone Star Park this past April. B-Three Chimneys Farm LLC & Whisper Hill Farm LLC (KY)

5th-HAK, ¥13,400,000 ($122k), Newcomers, 2yo, 1700m
POISON ARROW (c, 2, Arrogate–Crosswinds, by Storm Cat) fetched $750K at last year's Keeneland September sale, making him the most expensive of 41 of the late stallion (by Unbridled's Song)'s first-crop yearlings to sell (from 59 through the ring) in 2020. The Mar. 31 foal is a half-brother to $725K KEESEP grad Current (Curlin), a Grade III winner on turf as a juvenile, and to Weep No More (Mineshaft), who upset the 2016 GI Central Bank Ashland S. The chestnut's granddam is Juddmonte's Flute (Seattle Slew), winner of the 2001 GI Kentucky Oaks and GI Alabama S. and subsequently the dam of Filimbi (Mizzen Mast), a Grade III winner and four times placed in Grade I company on the grass. “We were really happy when he was so well accepted,” Hinkle Farms' Henry Hinkle told the TDN's Brian DiDonato after the colt's sale. “We got a lot of compliments on him. He's one of the nicest colts we've ever brought up here to sell.” Filimbi is also responsible for a member of Arrogate's first crop, the 2-year-old colt Calloway Peak, who is in training at Saratoga. B-Hinkle Farms (KY)

6th-NII, ¥13,400,000 ($122k), Newcomers, 2yo, 1200m
FUJIN SHOJO (f, 2, Speightstown–Big Raven {Ire}, by Fastnet Rock {Aus}), a $235K KEESEP acquisition, is sadly the lone produce of her dam, a daughter of GSW Devil By Design (Medaglia d'Oro), who produced GISW Competitionofideas to the cover of Speightstown in 2015. The progeny of the WinStar stallion have long been coveted in Japan, as he is the sire to date of 33 winners from 37 starters, including GISW mare Mozu Superflare; Matera Sky, a Group 3 winner at home, runner-up in the 2019 G1 Dubai Golden Shaheen and twice an unlucky loser of the Saudi Sprint; and three additional black-type winners. B-John D Gunther Eurowest Bloodstock & Tony Chedraoui (KY)