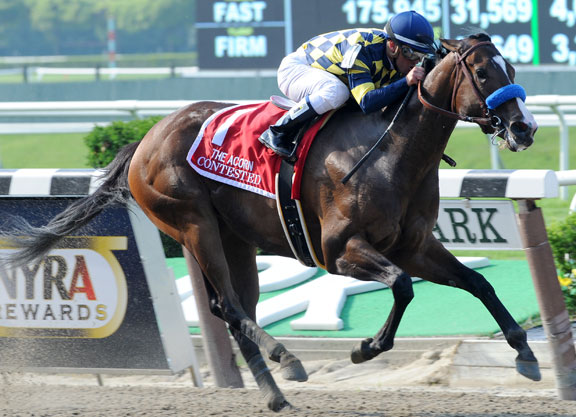 In this continuing series, Alan Carasso takes a look ahead at US-bred and/or conceived runners entered for the upcoming weekend at the tracks on the Japan Racing Association circuit, with a focus on pedigree and/or performance in the sales ring. Here are the horses of interest for this weekend running at Chukyo, Kyoto and Tokyo Racecourses:

Saturday, January 26, 2019
4th-KYO, ¥11,400,000 ($104k), Newcomers, 3yo, 1200m
R MARTINI (f, 3, Majesticperfection–Don't Trick Her, by Mazel Trick), bought back on a bid of $250K at Keeneland September in 2017, is one of seven winners from as many to race for her dam, including GISWs Include Me Out (Include) and Check the Label (Stormin Fever) amd SW On the Menu (Canadian Frontier). Don't Trick Her is a half-sister to MSW & MGSP Tiffany Diamond (Tiffany Ice) and to the dam of the Jones-bred 2014 GI La Brea S. winner Sam's Sister (Brother Derek) and SP Sensitive (Divine Park). The female family also includes GISW Sweet Talker (Stormin Fever) and MGSW Silver Medallion (Badge of Silver). B-Brereton C Jones (KY)