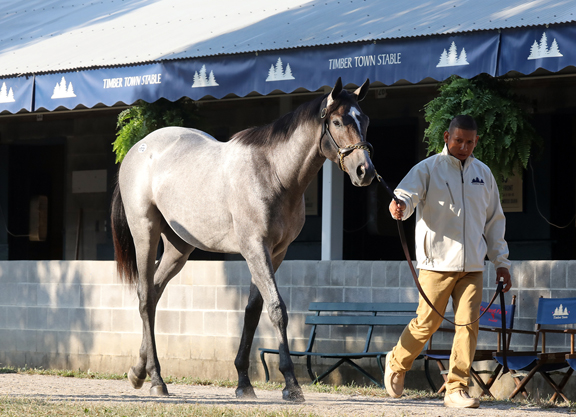 In this continuing series, we take a look ahead at US-bred and/or conceived runners entered for the upcoming weekend at the tracks on the Japan Racing Association circuit, with a focus on pedigree and/or performance in the sales ring. Here are the horses of interest for a busy Saturday running at Kyoto and Tokyo Racecourse, including a pair by American Pharoah and the stakes debut of the exciting Vanishing Point. Sunday's runners will feature in Saturday's TDN:

SATONO IMPULSE (c, 2, Tapizar–Allencat, by Storm Cat) is out of an unraced daughter of GISW Pharma (Theatrical {Ire}) who has already bred MSW Miss Frost (Curlin), the dam of MSP Torres Del Paine (Karakontie {Jpn}). The colt's third dam is champion and MG1SW Committed (Hagley), whose son Hap (Theatrical {Ire}) was a six-time GSW and twice GISP and whose daughter Belva (Theatrical {Ire}) is the dam of champion MGISW English Channel (Smart Strike). A $60K KEEJAN short yearling, Satono Impulse fetched $135K as a Fasig-Tipton July yearling and was hammered down for $500K at OBSMAR after drilling a furlong in :10 flat. Tapizar is the sire of three winners from as many runners to date in Japan. B-Kendall E Hansen MD Racing LLC (KY)

5th-KYO, ¥13,400,000 ($128k), Newcomers, 2yo, 1200mT
TOP THE BILL (JPN) (f, 2, American Pharoah–Top Decile, by Congrats) is the first foal from her dam, second in the GI Darley Alcibiades S. and GI Breeders' Cup Juvenile Fillies for Klaravich Stable and Al Stall, Jr. in 2014. Off the board in a pair of sophomore starts, Top Decile was purchased by Stronach Stables for $400K at KEENOV in 2015, remained in training and won one of four starts before selling for $950K with this filly in utero at KEENOV in 2017. Top Decile is the dam of a yearling filly by Heart's Cry (Jpn) and a weanling filly by Daiwa Major (Jpn). B-Shadai Farm