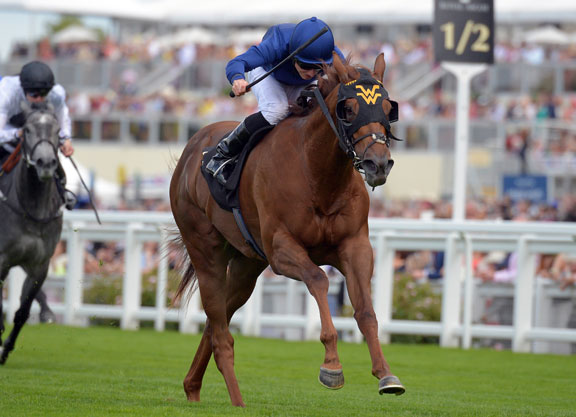 In this continuing series, we take a look ahead at US-bred and/or conceived runners entered for the upcoming weekend at the tracks on the Japan Racing Association circuit, with a focus on pedigree and/or performance in the sales ring. Here are the horses of interest for this weekend running at Fukushima and Tokyo Racecourses:

Saturday, November 16, 2019
3rd-FKS, ¥9,550,000 ($88k), Maiden, 2yo, 1200mT
PINGXIANG (c, 2, Speightstown–Beauty and Light, by Unbridled’s Song) got his career off on a positive note, finishing a competitive third going this trip at Kokura July 27 (video, gate 9). Purchased in utero for $300K at Keeneland November in 2016, the blaze-faced chestnut cost $100K as a KEESEP yearling and is out of a half-sister to multiple Group 3-placed Snowboarder (Raven’s Pass) from the same Gone West sire line. His third dam includes Speightstown’s top stallion son Munnings. B-Dream With Me Stables Inc (KY)

12th-FKS, ¥28,600,000 ($264k), Allowance, 3yo/up, 1200mT
SAN JOSE TESORO (c, 3, The Factor–Cabaret Starlet, by Tale of the Cat), an impressive first-out winner over 1400m in March (see below, gate 6), failed to handle a mile in his next two appearances, but bounced back with a good-looking victory over this distance when last seen July 14. A $30K KEEJAN yearling turned $100K OBS April graduate, the gray is out of a half-sister to Canadian Horse of the Year Arravale (Arch) and SW Hollywood Hideaway (Zensational). B-Sheltowee Farm, WMK Racing LLC, Patricia Pavilsh, Joe Miller et al (KY)