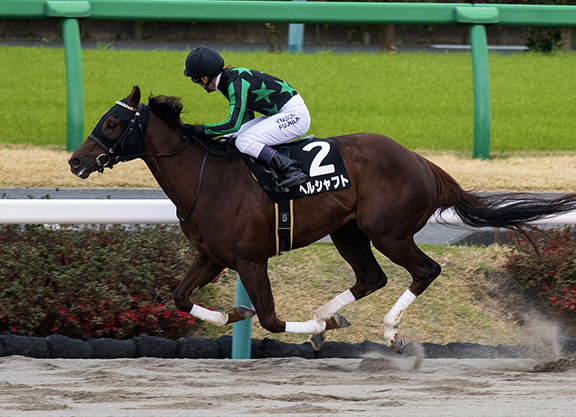 In this continuing series, we take a look ahead at US-bred and/or conceived runners entered for the upcoming weekend at the tracks on the Japan Racing Association circuit, with a focus on pedigree and/or performance in the sales ring. Here are the horses of interest for this weekend running at Hanshin and Tokyo Racecourses. Group 1 racing returns to Japan with Sunday's running of the February S. at headquarters, in which the very talented Cafe Pharaoh (American Pharoah) is likely to jump a warm favorite:

11th-HSN, ¥41,800,000 ($395k), Handicap, 4yo/up, 1200m
HERRSCHAFT (c, 4, Will Take Charge–Love Ava Love, by Mr. Greeley) was one of the surprise packages among last year's Japanese 3-year-old crop, winning twice from three starts, including the Fukuryu S. (allowance) in March (see below, gate 2), what was to be the final leg of the Japan Road to the Kentucky Derby. The $110K KEENOV weanling turned $200K KEESEP yearling is out of a half-sister to MSW & GSP Global Power (Pulpit) and his third dam is 1994 Canadian Horse of the Year Alywow (Alysheba). B-Colts LLC (KY)