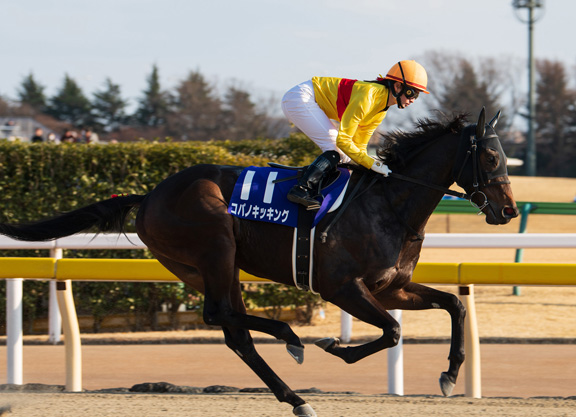 In this continuing series, we take a look ahead at US-bred and/or conceived runners entered for the upcoming weekend at the tracks on the Japan Racing Association circuit, with a focus on pedigree and/or performance in the sales ring. Here are the horses of interest for this weekend running at Kokura, Kyoto and Tokyo Racecourses, the latter of which hosts the G3 Negishi S. and has attracted its defending champion Copano Kicking (Spring At Last) and G1SW Mozu Ascot (Frankel {GB}) making his dirt debut:

10th-KOK, ¥19,110,000 ($176k), Allowance, 3yo, 1700m
CLEPAT (f, 3, American Pharoah–Intelyhente, by Smart Strike) became her sire’s first Japanese winner when taking out an 1800m Hanshin maiden by open lengths Sept. 15 (see below, gate 3), but may have struggled with a rain-affected track when down the field in the Cattleya Sho (allowance) at Tokyo Nov. 23. A $310K KEESEP yearling, the April foal is a half-sister to SP Count Alexander (Scat Daddy) and her dam is a full-sister to MGSW Bel Air Beauty, dam of Canadian champion Stacked Deck (First Samurai) and GSP Valentino Beauty (Vindication). B-William Duignan & Tranquility Investments Limited (KY)