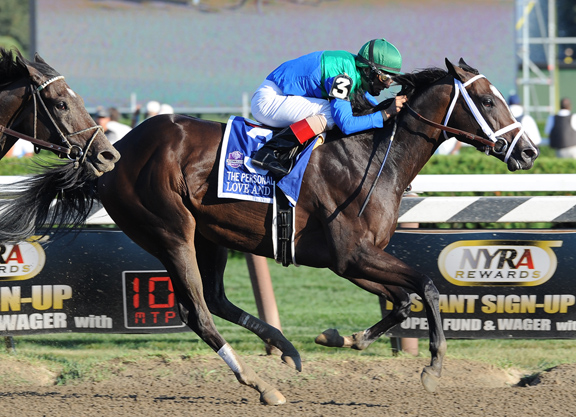 Voix d’Ange, a daughter of Love and Pride (pictured), goes back to work in Japan this weekend | Coglianese

In this continuing series, we take a look ahead at US-bred and/or conceived runners entered for the upcoming weekend at the tracks on the Japan Racing Association circuit, with a focus on pedigree and/or performance in the sales ring. Here are the horses of interest–a trio of fillies–for this holiday weekend running at Chukyo and Nakayama Racecourses:

Sunday, September 20, 2020
12th-NKY, ¥14,360,000 ($137k), Allowance, 3yo/up, 1200mT
DETROIT TESORO (f, 3, Speightstown–Bella Traviata, by Indian Charlie) comprised a record of three thirds and a second from four previous tries on the turf before punching through when last seen at Niigata May 24. The dark bay, produced by of a stakes-placed half-sister to MSW & MGSP Afleet Deceit (Northern Afleet), was bought back for $180K out of the 2018 Fasig-Tipton Saratoga sale, was RNAd for $127K at FTKOCT a handful of weeks later and was acquired by owner Kenji Ryotokuji for $375K at last year’s Fasig-Tipton Gulfstream sale. Her Distorted Humor half-brother fetched $100K Thursday at Keeneland September. B-Blackstone Farm LLC (PA)

Monday, September 21, 2020
3rd-CKO, ¥9,680,000 ($92k), Maiden, 2yo, 2000mT
VOIX D’ANGE (f, 2, Curlin–Love and Pride, by A.P. Indy) may have struggled with a rain-affected turf when a midfield seventh on Tokyo debut going a mile June 28, but the $675,000 KEESEP graduate improved to be second to the record-setting Wonderful Town (Jpn) (Rulership {Jpn}) on a sounder surface over nine furlongs at Niigata July 25. Grade I winner Love and Pride, who was acquired by Three Chimneys for $4.9 million in foal to Distorted Humor at FTKNOV in 2013, is the dam of the SW Princesinha Julia (Pioneerof the Nile) and a now-yearling Gun Runner filly that made $750K to top the weanling offerings at FTKNOV last fall. Love and Pride is closely related to top sire Bernardini. B-Three Chimneys Farm LLC (KY)