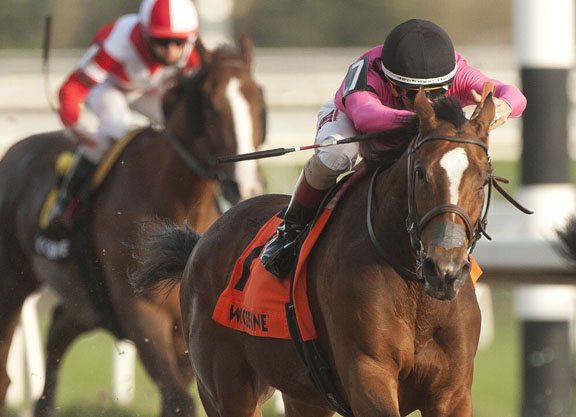 In this continuing series, we take a look ahead at US-bred and/or conceived runners entered for the upcoming weekend at the tracks on the Japan Racing Association circuit, with a focus on pedigree and/or performance in the sales ring. Here are the horses of interest for this Saturday running at Chukyo Racecourse. A pair of US-bred runners entered for Sunday's races and making their career debuts at Chukyo will feature in Saturday's TDN:

Saturday, January 9, 2021
6th-CKO, ¥11,400,000 ($110k), Newcomers, 3yo, 1600mT
GALLANT MANNER (c, 3, More Than Ready–River Cruise, by Not For Love) debuts in the Godolphin blue and was acquired by Harry Sweeney's Paca Paca Farm for $320K at Keeneland November in 2018, the most expensive of eight of this legendary sire's foals reported as sold that year. A full-brother to SW More Than a Cruise and a half to SP Oriental Cruise (Orientate), the February foal is out of a dual stakes-winning half-sister to GSW Secret River (Secret Odds). B-Athens Woods LLC & More Than Ready Syndicate (KY)

PARADISUM (c, 3, Medaglia d'Oro-Taste of Heaven {Aus}, by Encosta de Lago {Aus}) tries winners for the first time after graduating impressively over this distance at Kyoto Oct. 31 (see below, gate 1). The colt's dam, an A$1.5m ($1.389m) purchase by James Harron Bloodstock out of the 2014 Magic Millions National Broodmare Sale, is a full-brother to G1SW sire Manhattan Rain (Aus) and SW & G1SP Echoes of Heaven (Aus); and is a half-brother to the legendary Redoute's Choice (Aus) (Danehill), G1SW Platinum Scissors (Aus) and to GSW Sliding Cube (Aus) (Rock of Gibraltar {Ire}), the dam of 'TDN Rising Star' and successful young sire Rubick (Aus) (Encosta de Lago {Aus}). Paradisum, a half-brother to Canadian Grade III winner and $625K KEESEP grad Heavenly Curlin (Curlin), was bought back on a bid of $235K as a KEENOV weanling and fetched $400K at KEESEP in 2019. B-Elevage II LLC (KY)