Home » Archive » Europe » Noel Meade: 'Whoever Wins In The Ring Wins On The Track'

Noel Meade: 'Whoever Wins In The Ring Wins On The Track' 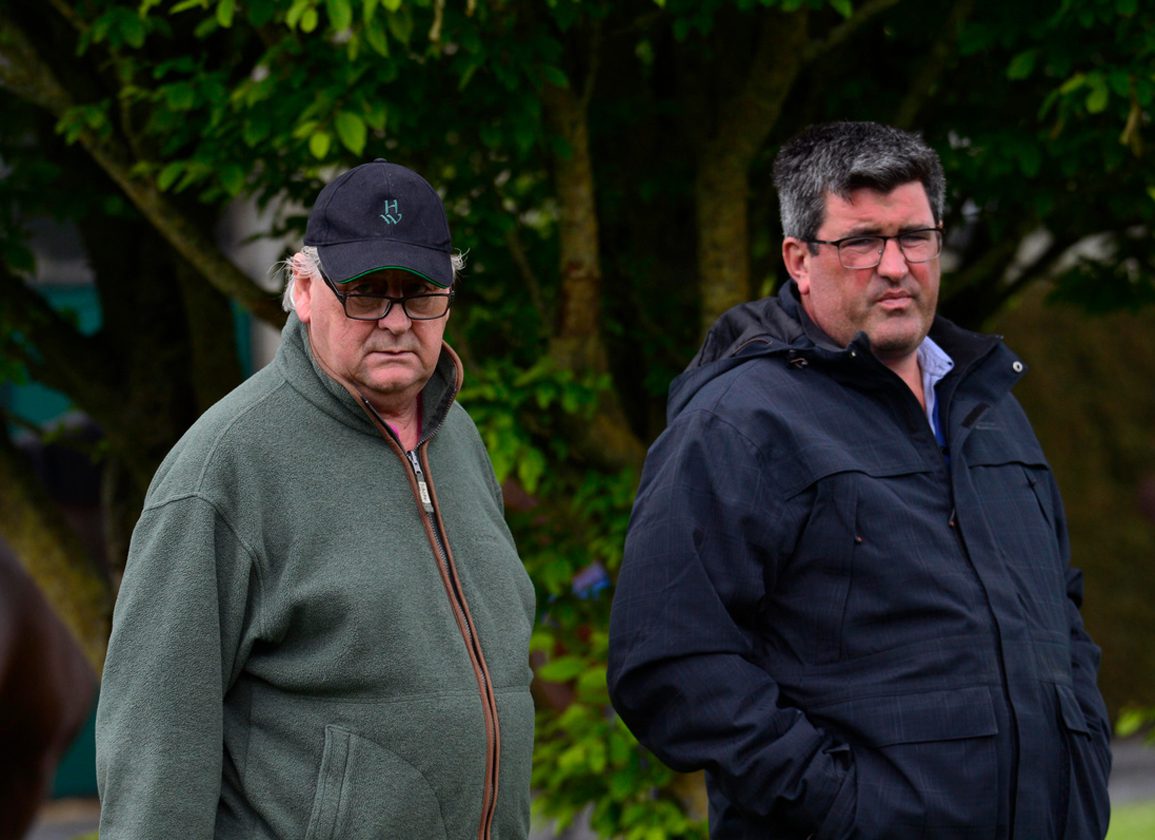 Noel Meade and Peter Nolan at the sales | Tattersalls

However, Meade, who has been training since 1971, has redirected his energies to Flat racing in recent season, a decision that was vindicated when Helvic Dream (Ire) (Power {GB}) provided him with a breakthrough Group 1 success in the Tattersalls Gold Cup at the Curragh last year.

Meade was busy adding to his Flat string at the Tattersalls Ireland September Yearling Sale, which has been lucky for him in the past, alongside Peter Nolan this week. The pair will also be out in force at the Orby and Sportsman's Sale at Goffs next week and the trainer sat down with Brian Sheerin for this week's Q&A.

Brian Sheerin: It's been a busy few days for you at Tattersalls Ireland buying eight yearlings with Peter Nolan. In many ways, things have gone full circle with you and your training operation.

Noel Meade: I got back into the Flat as a small business venture a few years ago and it has worked quite well. A few pals of mine got involved as well and we have had a bit of luck. I have moved away from buying jumpers, but I will still train them–there's 35 to 40 in this winter, but that's down from 145 at one point. That's the most National Hunt horses we've ever had at one stage so we're a good bit down on that these days. It just became increasingly difficult to buy the horses that we were buying to go jumping with. The top horses are making so much money over jumps, you really need a big owner who is prepared to throw money away because, whether they're bought as stores or off the Flat, when they're finished racing, they're worth very little. Whereas with the Flat horses, you can buy a 2-year-old to race and then it becomes a worldwide commodity. Take this year as an example, we have sold horses to Singapore, Hong Kong, America and Britain. That just gives you an idea of the contrast between the two codes. Now, it was easier to sell the Flat horses when my main interest was with the jumpers. You didn't feel as bad about selling the Flat horses when you know you have a big string of jumpers to look forward to in the winter. This year, things are a bit different. It was Ger Lyons who said it to me one day, 'it's all very well for you Noel, you're making it pay but, when you sell those horses, you won't have them to run.' When horses were winning, they were being sold, but that's what we chose to do and we're doing it.

BS: We would have always associated you with buying big and backward yearlings who, if they didn't make it as Flat horses, would more than likely make it as jumpers. It's fair to say your approach to the sales have moved on from that.

NM: No, we've gone the other way now and are buying the horses who can win on the Flat. I bought one horse this morning, a big huge horse, and I'll probably geld him straight away and leave him off. The rest of them should run on the Flat.

BS: Peter Nolan signed for all of those yearlings and your Group 1 winner Helvic Dream, who was also picked up at Part Two of this sale in 2018. How much of a help is he?

NM: He is a huge help. Peter is very much part of the scene with me. Mags O'Toole was my right-hand woman for a long, long time. She used to buy the jumpers with me but she is so busy with Robcour, Eddie [O'Leary] and others now. She was in Keeneland last week so she's just not able to do everything. Peter has slotted into that role and he's been a big help.

BS: One thing that was notable about Irish Champions Weekend was that the winners were spread out among a variety of different trainers. The same can't be said about the top table in National Hunt racing. Was that another factor in your decision to concentrate more on the level?

NM: It was. We bought eight horses at an average of about €25,000 and I would hope that people will own the majority of them. They were bought on spec and I would hope I can find homes for most of them.

BS: And what is your approach to the National Hunt Sales?

NM: Well, to be honest, it has become impossible to even buy the store horses these days. The point-to-point lads, who are great fellas and fabulous trainers, are now prepared to give €100,000 for a store. The likes of Colin Bowe, Denis Murphy and the Doyle brothers, those lads are spending huge money. I would have always thought that giving 25 or 30 grand for a store was plenty. You can't do that anymore. Whereas, you can come here and buy a nice yearling. The ones we bought are perfectly correct and well-balanced horses and they didn't cost too much. I don't know what Goffs is going to be like next week, it sounds like it's going to be crazy, but what I would say is, you can still buy horses on the Flat. You can't buy jumpers.

BS: You've done well with your small-money buys on the Flat in recent years. This place [Tattersalls Ireland] in particular has been lucky for you.

NM: Helvic Dream was a lovely-looking horse. He cost just €12,000 here. Joanna Morgan sold him to us and she was shouting about how good he was and he came at the right price on the day. Layfayette (Ire) (French Navy {GB}) came out of this sale as well but we bought him as a breezer for €54,000. It was Peter who spotted him, actually. He saw him breeze and he was mad about him. We were lucky enough that Patricia Hunt bought him because he wasn't too cheap and it's just great that he worked out as well as he did.

BS: You've enjoyed major success over jumps but it seemed as though you got a great kick out of Helvic Dream providing you with your Group 1 breakthrough in the Tattersalls Gold Cup last year.

NM: I got a great kick out of it. I had horses run well in the Derby, had fillies placed in the Irish 1,000 Guineas, but have never got that Group 1 win before I started training the jumpers. It did annoy me that I didn't have that Group 1 win to my name. So, to get that with Helvic Dream, it meant a lot. Especially with Colin [Keane] riding him, we get on so well, so it was great that he was the man riding it for me. It was just a pity that nobody was there to enjoy it with us due to Covid.

BS: There have been a lot of what we'd perceive as mainly National Hunt trainers who have been concentrating more on their Flat strings in recent seasons. Jessica Harrington and yourself are the obvious examples but even people like Gavin Cromwell have followed suit. That's just a reflection of how difficult it has become to compete at the highest level over jumps.

NM: The amount of horses that are concentrated in just three or four different yards is unbelievable. When I started out, if a fella had 60 or 70 horses, he'd have a big string. Now, loads of people train 100 horses. You wouldn't have been able to do that years ago. The mobile phone has been revolutionary. The likes of Willie Mullins, Gordon Elliott and Joseph O'Brien, those guys have brought things to a new level. Willie has someone to buy them, place them, manage the transport, etc etc. They have become delegators. Even Jessica [Harrington], she has developed a lovely system there with Kate [Harrington] and Richie and Emma Galway, so she has a good team. Gordon is a great pal of mine and he has a great team around him as well. It's no longer viable for one man or woman to do everything. You need a good team around you and some of these big yards just move like clockwork.

BS: What have you made of the market this week?

NM: Horses were buyable. I know this week was second grade compared to the Orby and a lot of people will find it hard to buy next week but we were happy with the business we were able to get done. We've a couple of biggies to buy next week and we may struggle to buy them as everyone is predicting trade to be very strong. I was talking to Clive Cox the other day and he commented about the trade being strong but added that, considering what's happening in the world, it was amazing.

BS: So you won't be approaching the sales season with added caution given what's going on in the world?

NM: If you're going to war, you've got to have troops, and we'll continue to be active at the sales. We'll be at Goffs next week and we'll try to buy a few and, if we meet someone who wants to send us a horse to train, then we'll be delighted to do that as well. I've always said that whoever wins in the sales ring wins on the track. People can say what they like but it's the people with the best horses who are winning on the track. The more you win, the more horses you get, and it builds and builds. Willie is a great example of that. Success breeds success.

BS: You say your yard is now split 50-50 between both codes. If a big owner came through your door in the morning and wanted to send you a top-class Flat horse or a Cheltenham festival contender, which would you pick?

NM: Look it, the attrition rate over jumps is very hard and that's a hard question to answer but my heart will always be in the jumps.