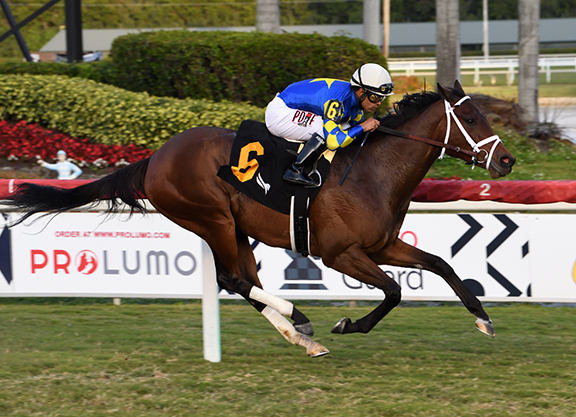 Jouster (Noble Mission {GB}), a beaten favorite twice on dirt to start her career, took to the turf with dazzling aplomb in the Sunday finale at Gulfstream, running away to a devastating maiden romp and ‘TDN Rising Star’ honors. Unveiled over six furlongs in the Saratoga slop Aug. 29, the $360,000 Fasig-Tipton Saratoga buy showed big speed before fading to finish second, and again retreated after setting the pace stretching out to a mile Sept. 26 at Belmont. Freshened up since then for a barn that has, as per usual, run roughshod over the Gulfstream Championship Meet thus far, she returned with a sharp Palm Beach Downs worktab capped by a bullet half-mile in :48 1/5 (1/25) Jan. 3. Backed as the fractional 5-2 favorite here, the bay quickly established command and led comfortably through splits of :23.36 and :48.01. Well held as her nearest pursuers were driven approaching the lane, Jouster opened up five lengths by the time heads pointed for home and poured it on down the stretch under mild urging, gliding home 8 3/4 lengths to the good in a sizzling final clocking. Champagne Ivy (Shackleford) was second. The winner is the first foal to race out of a daughter of the Phipps family’s 2002’s champion 2-year-old filly Storm Flag Flying, herself a daughter of the Phippses’ My Flag. Also residing under the third dam on Jouster’s pedigree are MGSWs Parading (Pulpit) and Teresa Z (Smart Strike) and GSW Performer (Speightstown), recently third as the favorite for the Phippses and McGaughey in the GI Cigar Mile H. Playtime produced a filly by West Coast last spring and has an unraced 4-year-old Liam’s Map filly named Dressed Up Gypsy.