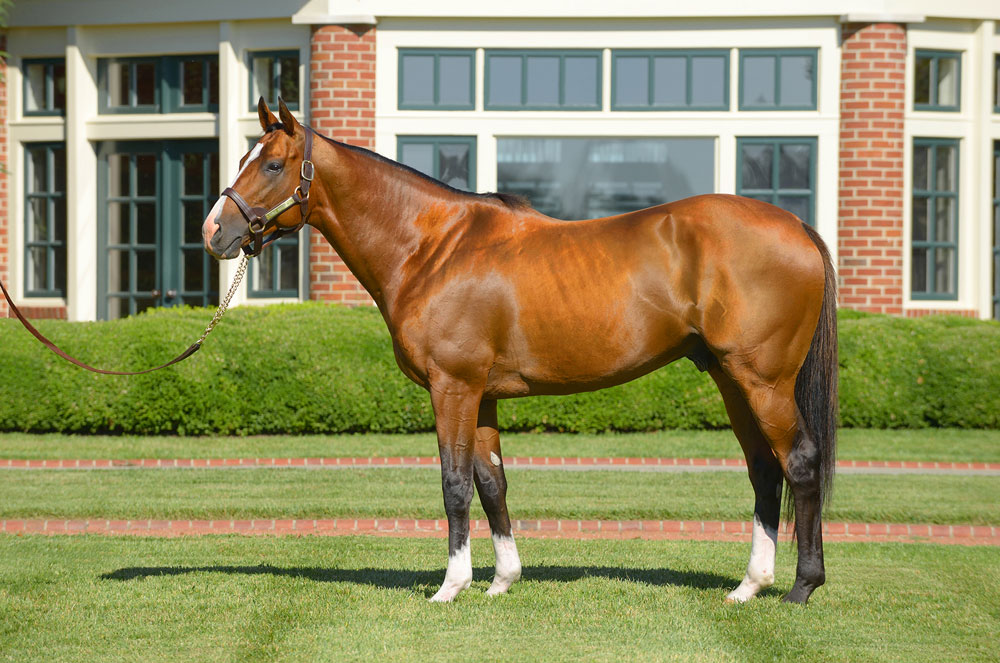 It’s probably fair to call it a first-world problem, but one dilemma which extremely successful owner/breeders can find themselves facing is what strategy to adopt when a top-class broodmare produces several prospective stallions, because it is asking a lot for them all to fulfil their potential if they are standing alongside (and essentially in competition with) each other. That is the position which Prince Khalid Abdullah has found himself in with Kind (Ire) (Danehill), dam of two winners of the G1 Champion S., i.e. the peerless Frankel (GB) (Galileo {Ire}) and his full-brother Noble Mission (GB).

Few have played their cards better in such a situation than the 17th Earl of Derby, whose 1922 Park Hill S. victrix Selene (GB) (Chaucer {GB}) produced not only the 1933 Derby and St Leger hero Hyperion (GB) (Gainsborough {GB}) but also the high-class colts Sickle (GB) (Phalaris {GB}), Pharamond (GB) (Phalaris {GB}) and Hunter’s Moon (GB) (Hurry On {GB}). Lord Derby stood Hyperion himself in Newmarket (mostly at Woodlands Stud but also at Plantation Stud for three seasons) which was a good move as the little chestnut turned out to be Great Britain’s greatest stallion of the 20th century. He also stood Sickle for one season at Woodlands before the horse was leased to (and subsequently bought by) Joseph Widener who relocated him to his Elmendorf Stud in Kentucky, a move which worked out very well as Sickle was US Champion Sire in 1936 and ’38, and his sire-line yielded in turn Unbreakable, Polynesian, Native Dancer, Raise A Native and Mr. Prospector. Pharamond was sold to a syndicate headed by Hal Price Headley (who subsequently bought out his partners) to stand at Headley’s Beaumont Farm in Kentucky, where he enjoyed great success; while Hunter’s Moon was sold to South America, where he started his stud career in Argentina and ended it in Brazil and sired numerous champions.

The late Lord Howard de Walden faced similar decisions regarding the placement of the progeny of his great mare Doubly Sure (GB) (Reliance {Fr}). He made sure that her two best sons stood on opposite sides of the Atlantic. He stood Kris (GB) (Sharpen Up) at his own Thornton Stud in Yorkshire while Diesis (GB) (Sharpen Up) went to Mill Ridge in Kentucky. Their siblings Keen (GB) (Sharpen Up), Presidium (GB) (General Assembly),  Doubletour (Lyphard) and Rudimentary (Nureyev) were dotted around the British Isles.

More recently, Prince Khalid Abdullah has found himself in the same situation with the offspring of Kind (Ire) (Danehill).  Mirroring the movements of the top-class full-brothers Kris and Diesis, Frankel has settled at Banstead Manor Stud while Noble Mission calls Lane’s End Farm in Kentucky home; while Bullet Train (GB) (Sadler’s Wells) is at Woodfield Farm Stud in Ireland after having spent seven years in Kentucky, Morpheus (GB) (Oasis Dream {GB}) is at Haras de Chesnaie in France after having spent four years at Tally Ho in Ireland, and Proconsul (GB) (Galileo {Ire}) is about to start his third season at Mickley Stud in England.

Noble Mission wasn’t as good a racehorse as Frankel, but that’s no disgrace because no horse has been as good as Frankel.  But he was still a proper Group 1 performer in his own right. He won three Group 1 races during his final year in training (2014) and in the last of them he emulated his brother by bringing down the curtain on a distinguished career by taking the G1 QIPCO Champion S. at Ascot. He too then topped it all off by collecting a Cartier Award (albeit ‘merely’ as Champion Older Horse, rather than Horse of the Year). By this time Frankel had completed two seasons at Banstead Manor, and Prince Khalid Abdullah took a leaf out of Lord Howard de Walden’s book by selling a majority interest in the horse to Lane’s End.

The similarities between Frankel and Noble Mission did not end with the way in which they concluded their racing careers.  Frankel had got his stud career off to a perfect start when his first runner Cunco (Ire) won on debut at Newbury in May 2016.  Noble Mission followed suit. Bred by Green Lantern Stables LLC, On A Session was bought at the Keeneland September Sale in 2017 for $50,000 by Amy Marnane and brought to Ireland. He was offered by Bansha House Stud at the Goffs UK Breeze-Up Sale at Doncaster this spring but was retained by his vendors at £60,000. Put into training in France by the Marnanes with Matthieu Palussiere, he made the perfect start for Noble Mission by scoring on debut, taking the Prix des Hortensias at Lyon Parilly by 4 1/2 lengths on May 10. Two weeks later he doubled his tally by landing the Prix De Puycharic at Angers.

While Noble Mission was a British racehorse and sired his first winner in France, the focus of his stud career, of course, is primarily in the USA. He ends 2018 in seventh place (judged on worldwide earnings) in the American First-Season Sires’ table, which is extremely creditable for a stallion whose progeny, if they take after their father, ought not to be particularly precocious, ought to progress markedly as they mature, and ought to show their best form on turf. His progeny have earned $676,576 in North America and the equivalent of $97,097 in Europe, putting him just ahead of MGSW Fed Biz (Giant’s Causeway) and the top-class dirt runners Verrazano (More Than Ready) and Mucho Macho Man (Macho Uno) who lie in seventh, eighth and ninth, respectively.

The star of Noble Mission’s first crop at this early stage appears to be the Lane’s End home-bred Code Of Honor, who was offered as a yearling at Keeneland last September but failed to reach his $70,000 reserve. Consequently Will Farish put him into training with Shug McGaughey and must now be very thankful that he didn’t sell him. Code Of Honor went from winning a six-furlong maiden special weight at Saratoga in August to contesting the G1 Champagne S. over a mile at Belmont seven weeks later and he coped with the rise in class and distance admirably, staying on strongly to finish second of 10 behind the favourite Complexity (Maclean’s Music). An elevated temperature ruled Code Of Honor out of the GI Breeders’ Cup Juvenile and he still wasn’t ready for his fall-back option in the G2 Remsen S. at Aqueduct in December, so he is now heading down to Florida to begin his preparation for the Triple Crown Series. He is currently ranked fourth in the TDN’s Derby Top 12, and major honours surely await.

Code Of Honor is not Noble Mission’s only stakes performer.  Life Mission has recorded minor placings in listed company in the Kentucky Downs Juvenile Turf Sprint S. at Kentucky Downs, the Awad S. at Aqueduct and the Pulpit S. at Gulfstream Park.  Other promising US-based juveniles for Noble Mission include the maiden special weight winners Noble Love and Surprise Again, trained respectively by Bret Calhoun and Christophe Clement. Wild as Elle is another maiden special winner to keep an eye on, as the filly streaked to a 2 1/2-length victory going a mile over the Gulfstream sod for trainer Brendan Walsh on Dec. 30.

Understandably, several sons and daughters of Noble Mission have been brought to Europe. Even so he has obviously had nothing like the numerical representation of the locally-based stallions, which makes his 22nd position in the first-season sires’ table for Great Britain and Ireland particularly creditable. Five of his 13 runners in the British Isles have won: the John Gosden-trained novice winners Buffalo River and Humanitarian, the David Simcock-trained conditions race winner Spanish Mission, the Simon Crisford-trained maiden winner Alnadir, and the Sylvester Kirk-trained Hackle Setter, winner of a novice auction race at Chepstow and a nursery at Epsom.

All told, Noble Mission has started his stud career very promisingly. Just as it worked so well sending Hyperion’s half-brother Sickle and Kris’s full-brother Diesis to the USA, so it could turn out that the decision to settle Noble Mission at Lane’s End has been a very good one. El Prado (Ire) (Sadler’s Wells) and his son Kitten’s Joy have already demonstrated that the right horse from the Sadler’s Wells line can thrive at stud in Kentucky.  In years to come we may well find ourselves putting Noble Mission in the same bracket.