Home » Archive » Shared News » No Worries As Winx Waltzes To 21

No Worries As Winx Waltzes To 21 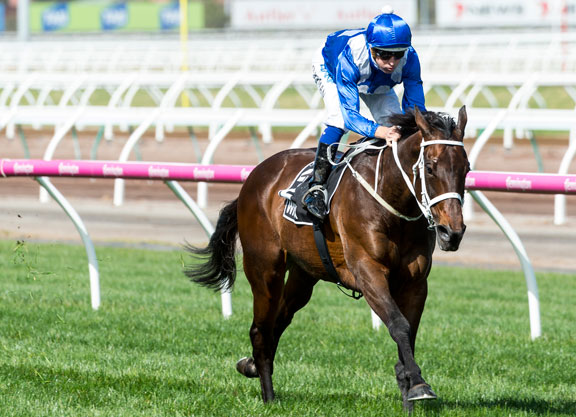 The mighty Winx (Aus) (Street Cry {Ire}) made her first visit to Flemington Racecourse a memorable one when she sauntered home a facile winner of the G1 Seppelt Turnbull S. over 2000m. on Saturday. It was a 14th Group 1 victory for the 6-year-old mare who was extending her unbeaten streak to 21, and with 25 victories in total she now matches the tally achieved by Black Caviar (Aus) (Bel Esprit {Aus}), albeit she went unbeaten throughout her career. While Winx has given her legion of fans a scary moment or two in her previous runs this campaign there was never a moment of doubt about victory on Saturday as she broke smartly under Hugh Bowman with the rider content to rein her back to fifth as 200/1 outsider Magicool (Aus) (Fastnet Rock {Aus}) set the early fractions. Sir Isaac Newton (Ire) (Galileo {Ire}), one of two runners for Robert Hickmott and Lloyd Williams pulled hard early on and Damian Oliver had a job to keep him in second as last year's G1 St Leger runner up Ventura Storm (Ire) (Zoffany {Ire}) settled another four lengths back in third.

Magicool cried enough just under four furlongs from home as Sir Isaac Newton and stable-mate Assign (Ire) (Montjeu {Ire}) were left dueling for the lead but Hugh Bowman was sitting pretty on their tails just biding his time on the brilliant mare and it was clear it was only a matter of how far? Bowman gave Winx a nudge 300m from home and she began to power clear under minimal urging, ultimately crossing the line eight lengths clears of her pursuers. The two Hickmott runners weakened up the straight and it was left to the Hayes and Dabernig trained Ventura Storm to pick up the pieces with Humidor (NZ) (Teofilo {Ire}), Winx's chief market rival, running on late for third having never really gotten into the race.

One would think connections of Winx are running out of superlatives at this stage but such is the dominance of her performances that those close to her can still sum up the feeling she is bestowing on them after each win. “This mare, she is taking all of us on this amazing ride and long may it live on,” Hugh Bowman told Racing.com. “It was plain sailing as soon as she broke cleanly from the barriers. She is just a dream to ride and a dream to be a part of. This mare is taking all our lives to a new level and we're all very grateful.”

'Winx Watch' now moves on to the prospect of an historic third G1 Cox Plate victory in three weeks time Oct. 28 and trainer Chris Waller was obviously proud but more so relieved to get through another race day unscathed with the mare. Waller's communication with the press is admirable but he did have one request when interviewed by Racing.com post race. “Give me a week to get over this, go easy on me the next week then you can have me for the last week,” he said in jest, alluding to the build up to the Cox Plate.

Waller's expert handling of Winx should also not be underestimated and he admits he is often in unchartered territory as to how prepared he thinks the mare is, especially coming off the back of a break. “We're still learning about her, there is no training manual for a horse like Winx. She has gotten heavier every preparation and each time I scratch my head and wonder, 'are you still not ready, are you still too heavy'? But she just keeps delivering.” Assuming and hoping Winx makes history and gets the job done in the Cox Plate, the agenda, from Europe anyway, will be a request to see Winx take on the best Europe has to offer. Waller has always made it clear a third Cox plate is the priority but he appears keen on a Northern Hemisphere trip next year and that is a prospect to keep racing fans warm over the winter. With the increased likelihood of Enable (GB) (Nathaniel {Ire}) staying in training as a 4-year-old, a clash of the two female titans in a race such as the G1 Juddmonte International at York next August could just be a nation stopping event. However Waller has a more immediate task at hand and one he appreciates the enormity of. “We understand our responsibilities and she's going to be very hard to beat [in the Cox Plate]. When she gets wound up and she lets go its pretty scintillating, he added.

While Winx is making racing legends out of her trainer and rider one must never forget the most important piece of the whole puzzle and that is her dam, the dual New Zealand stakes winner Vegas Showgirl (NZ) (Al Akbar {Aus}). Winx's sire, the late Street Cry (Ire) has obviously played a major role too, especially when you consider he is also responsible for another 'Queen of Racing' in Zenyatta. While it is highly unlikely Vegas Showgirl will ever produce another as successful as Winx she will in all probability breed more high class runners. She is already the dam of the 'TDN Rising Star' and G3 Kindergarten S. winner El Divino (Aus) (Snitzel {Aus}) and a sale topping full brother to that horse called Boulder City (Aus) who is in training with Gai Waterhouse and Adrian Bott. She also recently foaled a Exceed And Excel (Aus) filly at Segenhoe Stud for breeder John Camilleri of Fairway Thoroughbreds to complement a Snitzel filly foaled last year. Click for the free Arion.co.nz catalogue-style pedigree.