No 'Reel'-ing In Irish Invader in Turf 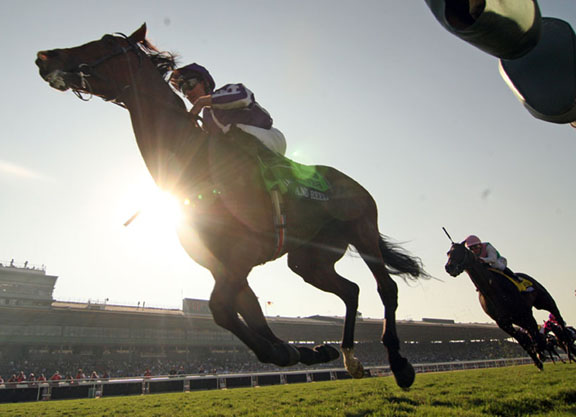 Many might have been wondering what exactly rider Seamus Heffernan was doing aboard the Coolmore contingent's Highland Reel (Ire) (Galileo {Ire}) when he asked his mount to blow the race apart before they had even hit the final bend, but it would all soon become clear as the globe-trotting 4-year-old struck the line 1 3/4 lengths to the good of favored Flintshire (GB) (Dansili {GB}) in the GI Breeders' Cup Turf.

Second behind his stablemate Found (Ire) (Galileo {Ire}) in the GI Prix de L'Arc de Triomphe last time Oct. 2, the 7-2 shot was aggressively ridden from the widest draw to clear into the first turn. He traveled comfortably as he passed the stands for the first time under a tight hold, getting his first six furlongs in a fairly sensible 1:12.70 over the rock-hard Santa Anita surface. Once on the backside, Heffernan cranked up the pressure, putting his mount in a full-out drive as if the finish line was on the other side of the track. Highland Reel had maybe six or seven lengths on Flintshire hitting the top of the lane, and while the favorite gave game chase, he had already been run off his feet. Found, last year's winner of the race, was a non-threatening third.

Highland Reel and Heffernan employed similar tactics–if perhaps not quite as exaggerated–when running away with last summer's GI Secretariat S. at Arlington. The bay continued to rack up frequent flyer miles after that, with a fifth behind Arc winner and 2015 BC Turf runner-up Golden Horn (GB) (Cape Cross {Ire}) and Found in the G1 QIPCO Irish Champion S. Third behind the great Winx (Aus) (Street Cry {Ire}) in the G1 Cox Plate in October, he bested Flintshire in Sha Tin's G1 Longines Hong Kong Vase in December. Off the board in tries in Dubai and back in Hong Kong over the spring, he returned to winning ways in Ascot's G1 King George VI & Queen Elizabeth S. in July and was second to Postponed (Ire) (Dubawi {Ire}) in the G1 Juddmonte International S. at York Aug. 17. Seventh back in the Irish Champion Sept. 10, he was 1 3/4 adrift of Found in the Arc as part of a 1-2-3 finish for his connections and his sire.

This was a record six BC Turf wins for conditioner Aidan O'Brien–all for the Coolmore partners–including four of the last six.

“The secret of the success is, like everyone knows, we're a very small part of a very big team of people, and we're only a small little chain on the way,” said the always gracious conditioner. “And, obviously, Galileo is an incredible stallion. He's the most unbelievable horse that we'll probably ever see or have anything to do with. They stay forever. They're super genuine, and they never know when to stop. So there are other things, but we're very privileged to be a small part of the team that we are really.”

The remarkable Galileo, who sired the first three home in last month's Arc, had the one, three and four in the Turf. Highland Reel is the fourth Breeders' Cup winner for the Coolmore stallion–all in the Turf. He was represented by last year's Turf winner Found (Ire), as well as 2013 winner Magician (Ire) and 2006 winner Red Rocks (Ire). Like Highland Reel, Magician is out of a mare from the Danehill line.

Hveger, multiple group placed in Australia, produced a filly by Galileo in 2015 and a colt by the sire this year. The filly sold for 625,000gns to De Burgh Equine/James Harron Bloodstock at this year's Tattersalls October sale, the same venue at which her 3-year-old brother Idaho (Ire) was purchased by M.V. Magnier for 750,000gns in 2014 and at which Highland Reel sold for 460,000gns in 2013. The 15-year-old mare is a full-sister to Australian champion Elvstroem (Aus) and a half to champion Haradasun (Aus) (Fusaichi Pegasus).