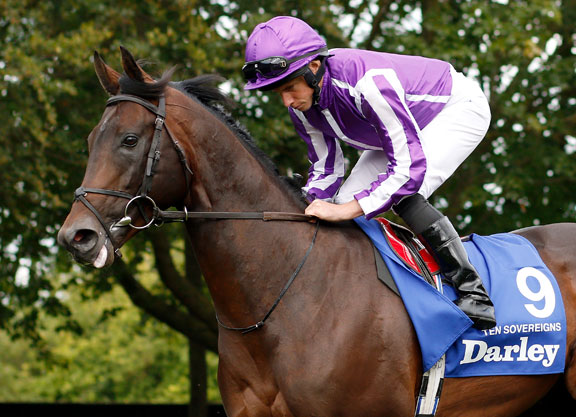 If there was an element of doubt that TDN Rising Star Ten Sovereigns (Ire) (No Nay Never) retained either the ability or enthusiasm that had seen him garner a G1 Middle Park S., they were firmly put aside on Saturday as Ryan Moore dominated Newmarket’s G1 Darley July Cup. While the vibes surrounding Ballydoyle’s beau ideal were understandably lukewarm in the lead-up after a flat effort when fourth in the G1 Commonwealth Cup, the significant morning gamble that took place suggested those in the know were bullish. Hammered from 10-1 into 7-2 favouritism for a spell, he eventually started as the 9-2 joint-second favourite and burst from the stalls to take his group along up the centre. In front overall heading down into the “dip” with Pretty Pollyanna (GB) (Oasis Dream {GB}) keeping him at it, he showed the staying power that had prompted a 2000 Guineas bid as he stretched away for a 2 3/4-length verdict over the 3-1 favourite Advertise (GB) (Showcasing {GB}). Fellow Ballydoyle runner and TDN Rising Star Fairyland (Ire) (Kodiac {GB}) was 3/4 of a length back in third, as the 3-year-olds totally mastered the elder sprinters by covering the first five places. “He was very impressive today and although he was still a little bit babyish, he was sharper than at Ascot,” commented Ryan Moore, who was enjoying his second group 1 success in Britain this year. “He’s a top-class sprinter and there was no doubt about his superiority there. He was a little flat at Ascot and the ground was a little bit slow there. He needs a slick surface and gets the trip very well.”

Twelve months ago, Aidan O’Brien delivered US Navy Flag (War Front) to win this after a mile Classic campaign and it was not the first time he had achieved that feat as both the 1999 and 2001 heroes Stravinsky and Mozart (Ire) were shortening up after the elastic had just failed to stretch. In his emphatic Curragh wins on debut and in the G3 Round Tower S., Ten Sovereigns had looked to be one in the image of Mozart and that ill-fated star of Rosegreen had almost pulled off an Irish 2000 Guineas victory before his spell of sprinting glory. Confidently backed for the May 4 Newmarket Classic, he only tired in the final 100 yards to be fifth in a renewal that will long be remembered for the way the field split but the way the money came for him at Ascot suggested the preceding wet weather would not stop him.

In the event, the impact of the rain at the Royal meeting meant that he was unable to truly flow with his real “daisy-cutter” action and that was not a factor during this meeting that had seen track records readily fall. Taking on a different bent to the sluggish performer in the Commonwealth Cup, he was away fast to race in front initially isolated with Moore always asking the question in the saddle. Behind the stand’s-rail runner Glorious Journey (GB) (Dubawi {Ire}) but in control of his pack, he had the Wokingham winner Cape Byron (GB) (Shamardal) in trouble in his wake passing the two-furlong pole with only the slow-starting Pretty Pollyanna able to stay with him. Advertise, who travelled as slickly as he had at Ascot until halfway, was under the pump heading to the furlong pole where the race had already been taken out of his grasp. Hitting the line in 1:09.31, Ten Sovereigns was just outside the race record set by the 2013 winner Lethal Force (Ire) (Dark Angel {Ire}) but it was a case of reputation enhanced running the second-fastest July Cup in history.

“He was very good last year and we slowed him down all winter to get the mile and he nearly did,” explained Aidan O’Brien, who was registering a fifth success in the race to equal the pre-and post-war records of Charles Morton and Dr Vincent O’Brien respectively. “It took him a little bit of time to come back after Newmarket and he was just ready to go to Ascot, but we hadn’t really woken him up to go back to sprinting before that. He looked like a horse who hadn’t really clicked in yet mentally at Ascot, but he really blossomed afterwards and we felt he had really come alive. His times were unbelievable–in his last piece of work, he broke 11 seconds every furlong for four furlongs, so to do that he has to be very quick. He was smiling and in a good place after every piece of work.”

Ten Sovereigns also carried that out in the race itself on Saturday, clocking furlong splits of 10.91, 10.79, 10.51 and 10.62 after the first furlong and rounding off with an impressive uphill finale of 12.18, so the evidence is there for all to see thanks to the sectional timing data available at this meeting.

“Ryan didn’t mind which stall he was coming out of, he was going in a straight line and the horse changed gear after cruising which was impressive,” O’Brien added. “He’s a beautiful big horse with a great mind and I’d say he wouldn’t have any problem doing whatever you want, five or six. He was ready for this today, as he had to be to beat the horse that beat him at Ascot so we have to see how he comes out of it, but York [for the Aug. 23 G1 Nunthorpe S.] is the obvious race unless it goes soft.” Of the third, he added, “Mrs Stockwell always said that Fairyland was a six-furlong filly, but we took a chance in the English and Irish Guineas. She ran very well and ran a super race. She’ll come forward from that and could go for the Nunthorpe as well. She might not have had as hard a time as the winner, as we were looking after her a bit before this.”

Martyn Meade was magnanimous in defeat, but could not hide his disappointment that Advertise was unable to uphold Royal Ascot form. “Frankie said it was a little bit muddling, but we can’t take anything away from the winner,” he said. “On another day, it might have been a different result and you don’t get many options to win a July Cup, but there is another big race in him. The [Aug. 4 G1 Prix] Maurice de Gheest is an option, as is the [Oct. 6 G1 Prix de la] Foret [at ParisLongchamp], but I don’t want to overdo him. He’s maturing all the time and I just feel he’s a horse that wants to thrive on his racing and not be overdone, so I might give him a break and come back all guns blazing.”