No Nay Never's Alcohol Free Prevails In The July Cup 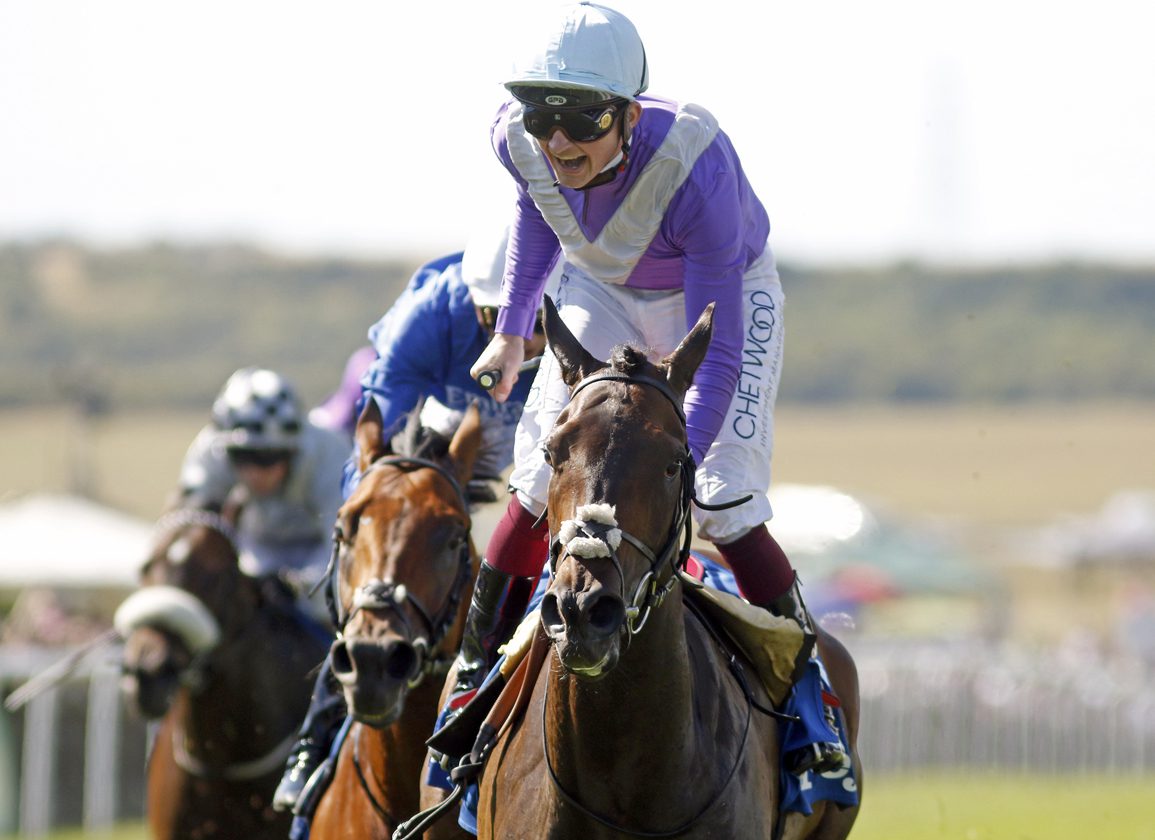 She wasn't supposed to like fast ground, but Jeff Smith's G1 Coronation S. and G1 Sussex S. heroine Alcohol Free (Ire) (No Nay Never) skipped the light fantastic on Newmarket's balmy July Course to stamp her class on Saturday's feature G1 Darley July Cup. Back to this six-furlong trip for the first time since winning the G1 Cheveley Park S. as a juvenile when under three-lengths ninth in Royal Ascot's G1 Platinum Jubilee S., the 14-1 shot was drawn in the right place with that race's winner Naval Crown (GB) (Dubawi {Ire}) blazing the trail towards the far side. Delivered by Rob Hornby to subdue that rival inside the final furlong, the Andrew Balding-trained homebred asserted to beat the Godolphin runner by 1 1/2 lengths, with half a length back to Artorius (Aus) (Flying Artie {Aus}) in third as the Platinum Jubilee form of the older horses came to the fore. “She's now won four group ones at two, three and four, which is a very unusual feat,” trainer Andrew Balding said after greeting his first July Cup winner. “She's a very talented filly and this is her time of year as well, she's twice the horse she was in the spring and it's just lovely to have her back on song.”

An INCREDIBLE 24 hours for @rob_hornby18!

Fresh from success aboard Prosperous Voyage in the Falmouth Stakes yesterday, the in-form rider guides Alcohol Free to victory in the Darley July Cup at @NewmarketRace @AndrewBalding2 pic.twitter.com/jQTpVkv4yO

Since the failed attempt by connections to stretch her to an extended 10 furlongs in the G1 Juddmonte International last August, Alcohol Free's record of one placing in four subsequent starts seemed to tell a story but closer analysis afforded her leeway heading into the most extreme speed test she had yet to face. Apart from the re-entry to the sprinting world in the Platinum Jubilee, she had probably needed her seasonal return when third in the Apr. 22 G2 Sandown Mile and it was only her fourth in the May 14 G1 Lockinge S. at Newbury and eighth in the G1 Queen Elizabeth II S. that cast any doubt as to her retained ability. This represented a return to the pomp of her defeat of Poetic Flare (Ire) (Dawn Approach {Ire}) in the Goodwood feature last term, with her deadly acceleration the key in a deep contest full of sprinting talent proven in the international sphere.

As it turned out, the 2022 July Cup was a case of being in the right place with Naval Crown and James Doyle the one to target and Alcohol Free able to sit over two lengths off him with Artorius in her wake. Despite pace pressure from Emaraaty Ana (GB) (Shamardal), Naval Crown was able to fend off all bar the filly heading to two out and the rest never stood a chance with the front three following that straight path towards the far rail. As on Friday, it was Rob Hornby who was judging things to a tee and it is fitting that he was becoming the first to ride the winners of the Falmouth and this at the same meeting since Johnny Murtagh in 2004.

“It just goes to show her guts and bravery, because she has form on every bit of ground now,” her rider commented. “Coming back to six furlongs, we were unsure if the ground was a bit quick and she was a bit disorganised in the first half of the race which she can sometimes be. From half way I felt her really kick in and she had a real fire in her belly today. It is a hell of a training performance from Andrew and everyone back at Park House. She is a fiery character and she has got a lot of personality. She has always shown lots of natural speed, but stamina as well.”

Balding is intent on heading back to the Sussex now to add to a star-studded line-up. “We needed to run somewhere between Ascot and Goodwood really–the Sussex Stakes has always been her main target, having won the race last year and we were just trying to find the best plan to get her there,” her trainer added. “She's obviously a speed miler rather than an attritional miler, so Goodwood should suit her really well and we look forward to it.”

Charlie Appleby was delighted with the performance of the runner-up and said, “Naval Crown has run a rock-solid race. The plan with him was to go and be forward. He set a good clip there and it was only the filly that has come and dived on us late. It was another solid performance at that level as well, and at sprinting more importantly. I think going forward we will probably head towards Haydock [for the Sprint Cup] with him, as the ground doesn't worry him at all.”

Sam Freedman said of Artorius, “Frustrating is the wrong word, because he always runs very well and a frustrating horse is probably one who mixes his form. He's very honest and reliable in the sense he's always finishing his races off and the 1300 metres for his next target would suit him nicely. He needs them to come back to him a little bit and today it's probably not been the easiest thing to do to make up ground.”

Christophe Soumillon reported that the seventh-placed 9-4 favourite Perfect Power (Ire) (Ardad {Ire}) was unlucky. “Unfortunately, when I asked him to come through horses I never had a clear run and we shifted from the left to the right. He finished well and it wasn't a bad run,” he said.