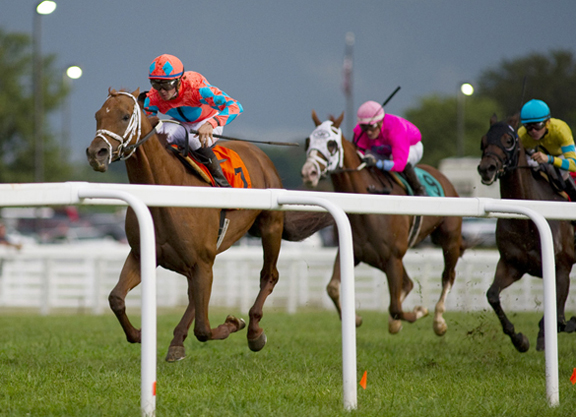 Da Big Hoss (Lemon Drop Kid), one of the hottest turf marathoners in the sport, will not be accepting an assignment to the G1 Melbourne Cup, his co-owner Harvey Diamond has confirmed.

“The logistics are just too tough, with vaccination, quarantine, etc., etc., etc.,” said Diamond, who acts as a spokesman for the ownership group Skychai Racing LLC. “It was a good idea and a lot of people over there were very interested in our coming. Who knows, maybe 2017.”

It appears that Da Big Hoss will still be leaving the country as Diamond said it's likely the horse will race next in the Oct. 16 GI Pattison Canadian International at Woodbine.

“We're actually going to take a serious look at the Pattison Canadian International,” Diamond said. “We feel like he's got two races left in him this year. I wish the Woodbine race was a week earlier, but we have to play it as it lays there. I'm not so sure we're going to the Pattison as an odds-on favorite but I'm sure the odds will be better than in the [GI] Breeders' Cup Turf. The last time I saw the Breeders' Cup Turf rankings, I think Da Big Hoss was listed as the sixth choice.”

Though there will be a relatively quick turnaround from the Canadian International to the Nov. 5 Breeders' Cup Turf, Diamond said he believes Da Big Hoss will be ready to tackle the challenge in both races.

“Right now, I feel pretty good about his chances in the Breeders' Cup,” he said. “Last year we ran sixth, beaten a half-length or less for fifth, and really weren't very happy with the pace of the race and our positioning. All that and we still were able to get up for sixth. Had we made fifth that would have been worth $90,000 and we would have gotten our entry fee back.”

With more time to plan for a possible start in the 2017 Melbourne Cup, Diamond said he will indeed consider it an option

“I think if I started planning about now and he turns out to be the horse we think he's going to be next year, yes, it will be much easier to pull off,” he said. “Stay tuned for 2017 and we'll see what happens.”

Claimed for $50,000 by Skychai Racing and trainer Mike Maker, Da Big Hoss has thrived in longer distance races. He currently holds a four-race win streak with his latest victory coming in the GIII Kentucky Turf Cup at Kentucky Downs.