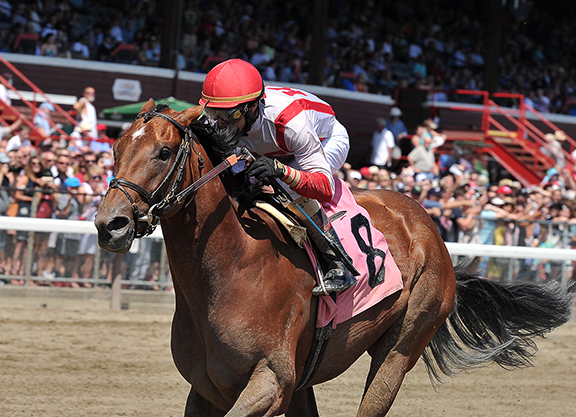 Klaravich Stables and William Lawrence's Practical Joke (Into Mischief) provided a fitting close-day exclamation point on a Saratoga meeting dominated by trainer Chad Brown and jockey Jose Ortiz with his late-running victory in Monday's GI Hopeful S. The race was altered dramatically right after the gates opened, as 6-5 favorite Classic Empire (Pioneerof the Nile) veered out sharply to the right and lost his rider, Irad Ortiz, Jr. Practical Joke sat in a joint third down the backstretch, one to two lengths off an extremely slow pace of :23.80 and :47.69. Bitumen (Mineshaft) began to move outside him at the three-eighths pole, but dropped away suddenly after that, allowing Practical Joke to swing out smoothly three wide at the top of the lane. Closing strongly outside of emboldened pace players Royal Copy (Bodemeister) and Pretty Boy Flash (Gone Astray), Practical Joke just got up in the nick of time to nail the former by a neck in 1:23.29.

“Jose gave him an unbelievable ride and he looked like he was extending away in the stretch so I don't think any added distance will be an issue,” said Brown, who extended his Saratoga record to 40 wins at the meet with the victory. “It's been a pleasure to train for these guys Seth Klarman [of Klaravich Stables] and William Lawrence. Next out, we'll probably point to the [Oct. 8 GI] Champagne.”

“It's been a pleasure to train him,” Brown continued. “That first race I thought he ran well and his second time here he also came back to run a huge race.”

Jose Ortiz, who was riding his 65th winner of the 40-day stand, is excited about the future with Practical Joke.

“I want to thank them for giving me the opportunity to ride him,” Ortiz said. “I think he's a pretty nice horse. He's got tactical speed, he can run close to the pace, and he fired when I asked him to run. The pace was pretty slow. I thought about taking the lead as soon as we broke because I knew we were going so slow. But something told me, don't do it, and the trip worked out perfect. He was running the whole way. He gave me a great turn of foot when I got him in the clear but the other two horses were in front and they kept fighting a little bit. As soon as he put a head in front, he kept going.”

As for the misbehaving favorite, Norm Casse, assistant to his father trainer Mark Casse, tweeted, “Classic Empire is fine back at the barn.” A debut winner at Churchill May 4, Classic Empire was coming off a win in the July 2 GIII Bashford Manor S. for owner John Oxley.