No Illusion About Breakout Summer for Twirling Candy 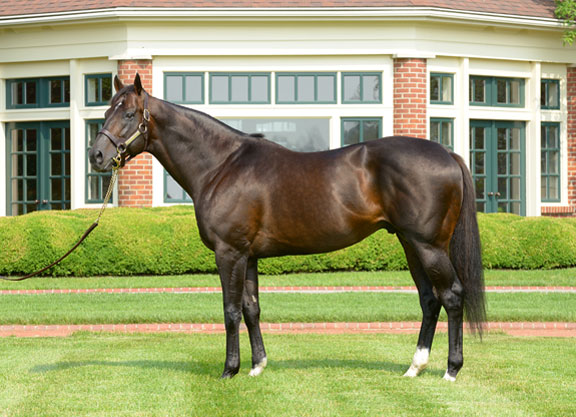 It's just as well the animals assembling for the GI TVG Pacific Classic can't read. Worthy creatures all, but you have to doubt any of them will fancy trying to crack the 1:59.11 set in the 2003 running–as described in Julie Krone's memoir of the meet that year, copies of which she will be signing trackside on Saturday.

And nor will those entertaining a stud career feel any more comfortable about matching the achievements of the two protagonists since. We all know that most young stallions won't ever again command a fee as high as their opening one. But Candy Ride (Arg) and Medaglia d'Oro have multiplied theirs by a factor of seven and eight respectively.

Lest we forget, the same man deserves credit for putting them both on the road. How it must grieve John G. Sikura that each, for various reasons, was soon transferred from Hill 'n' Dale. Happily, we can rely on Sikura to keep introducing feasible successors to a roster that always reflects his own verve. But how curious it seems, looking back, that Medaglia d'Oro was able to start out at $35,000 when the horse who ran away from him at Del Mar, almost laughing out loud as he cocked his head towards the grandstand, had to earn his stripes at $10,000.

To admirers of Candy Ride, in fact, the fact that he still musters less than half his vanquished rival's fee–their services nowadays for hire, at Lane's End and Jonabell respectively, for $80,000 and $200,000–remains no less incongruous.

The original disparity doubtlessly reflected the fact that Candy Ride not only failed to race again, after just six career starts divided between his native Argentina and California, but also teased things out for a full year before being retired. In the meantime Medaglia d'Oro was able to give Pleasantly Perfect (Pleasant Colony) rather more of a race in both the GI Breeders' Cup Classic and G1 Dubai World Cup, while also adding the GI Donn H.

Yes, Candy Ride's pedigree had Argentinian elements too exotic for the taste of many commercial breeders. But then Medaglia d'Oro, though big and beautiful, was by a turf stallion and his first three dams were by Bailjumper, Silent Screen and Restless Wind. Both rivals landed running, anyhow, with four Grade I winners apiece in their first crops. And neither has ever looked back.

Now that they are in their 20th year, however, the question is whether their estate papers are in order, in terms of an heir.

Medaglia d'Oro obviously has something of a reputation as a sire of exceptional females, but Sikura himself is standing one of his most plausible sons in Violence. Others contesting the eventual succession include Astern, Bolt d'Oro, Mshawish, Talismanic and Vancouver.

And Candy Ride? Well, though castration ruled out his early flagbearer Shared Belief even before tragedy, he too has a number of young sons now making their way at stud, notably a Horse of the Year in Gun Runner and the exciting Mastery. And two of them, Unified and Twirling Candy, are standing alongside him at Lane's End.

While Unified must also compete with the farm's many other young stallions, this summer there has been no getting away from the sense that all sons of Candy Ride will have to go hard to catch Twirling Candy.

In fact, shares in a stallion who was standing at $10,000 not so long ago are now understood to be trading at around $300,000. And Twirling Candy has been on a particularly spectacular roll since the start of August, in the process edging past Uncle Mo in the fifth-crop sires' table for 2019 by both prize money and black-type winners.

First his daughter Concrete Rose followed up her GI Belmont Oaks success in the second leg of NYRA's inaugural Turf Tiara, the Saratoga Oaks Invitational. That was her sixth win in seven starts and she appears to be the leading turf sophomore of her sex.

Then, last Saturday, Collusion Illusion emerged among the top juveniles on the West Coast by winning the GII Best Pal S. at Del Mar. The next day, moreover, Law Abidin Citizen won the GIII Longacres Mile at Emerald Downs-completing an outstanding weekend for Mark Glatt, who trains both horses.

And Twirling Candy promptly kept up his momentum at Fasig-Tipton's New York Sale, where a $320,000 filly made the fourth highest price of the auction. In all, his eight yearlings into the ring yielded six sales at an average $160,000-eight times their 2017 cover fee of $20,000.

The chance to get him at $10,000 had come in 2014, after an opening book of 118 had made the familiar drop, to 72. Breeders took that carrot, in that tricky third season, with a solid 85 mares. But the first clue to what has happened since was a bumper 154 the following year, after a very strong sales debut (notably with his first 2-year-olds).

Twenty-five juvenile winners (from 45 starters) in his freshman crop quickly enabled Lane's End to restore his fee to $15,000 for 2016, when he entertained 159 partners; and then to add consecutive $5,000 increments as Twirling Candy (who maintained books of 152 and 141 in 2017 and 2018 respectively) continued to reward breeders both in the ring and on the track.

Two Grade I winners eventually emerged from his first crop, in Finley'sluckycharm (Madison S. last year) and Gift Box (Santa Anita H. in April), though first to put him on the map had been the GII San Felipe S. winner Danzing Candy. In the meantime, the improvement in both the quality and quantity of his mares is starting to tell. Other notable achievements this year, for instance, include a Queen's Plate for One Bad Boy; while Tremont S. winner Fore Left joined Collusion Illusion on the podium when third in the Best Pal.

One unsurprising virtue becoming apparent in Twirling Candy's stock is his versatility. Candy Ride himself first made his name on turf, in his homeland, and also deployed that wonderful stride to win on the same surface in California. And Twirling Candy won the GII Del Mar Derby on grass, before breaking the track record in no less a dirt race than the GI Malibu S.; and then reverting to synthetics to win the GII Californian S. and share a photo-finish for two Grade Is over 10f-a record that also shows him to be no less flexible in terms of distance.

Sure enough, Twirling Candy's first elite winners duly turned out to be a sprinter (Finley'sluckycharm) and a two-turn toughie (Gift Box). And his stock are building an equally diverse profile in terms of racing surface, just as you would expect from his pedigree.

There's plenty of chlorophyll behind Candy Ride, not least through some interesting French roots. (In fact, you would think that many more European breeders need to get aboard with him while they can.) And Twirling Candy is out of a mare by Toussaud's lamented Arlington Million winner Chester House (Mr Prospector).

But he balances that with some iconic dirt influences. Besides having Mr P. top and bottom, through Fappiano and Chester House, and a grand-dam by a sire without frontiers in Danzig, the next dam is by Seattle Slew out of an Alydar half-sister to Affirmed.

Quite a trophy for Alydar, that: to be mated with his old rival's dam. And Twirling Candy, for his part, now finds himself batting on the same team as First Dude, who once thwarted him by a nose and a neck in a memorable three-cornered shoot-out with Game On Dude (Awesome Again) for the GI Hollywood Gold Cup.

That's because Collusion Illusion is out of a daughter of First Dude. Remarkably, in fact, he represents First Dude's very first recorded toe in the water as a broodmare sire. Bred by Donald R. Dizney, who stands First Dude at Double Diamond Farm in Florida, Collusion Illusion was picked out deep in the Keeneland September Sale for $50,000 by Don't Tell My Wife Stables. Glatt then gave $300,000 for the colt after he went :10 flat for Mayberry Farm at OBS April.

Sadly, Collusion Illusion is the only foal of his dam, who died last year. She was unraced, and likewise her mother Midway Squall (Storm Bird)-who, nonetheless, otherwise proved an extremely fertile source of good runners. Of her 13 winners, the fastest pair both won graded stakes and finished second in an elite dash: Bahamian Squall (Gone West) in the GI Alfred G. Vanderbilt S. and Apriority (Grand Slam) in the GI Carter H. Their stakes-winning half-sister by Carson City, meanwhile, is the dam of another Grade I near-miss in Hollywood Starlet S. runner-up Big Tiz (Tiznow), who was trained by Glatt and presumably caught his eye down the catalog page.

The next dam was by the 17.3hh Calumet monster Best Turn, who also features in the pedigree of First Dude. Further back, this family is rooted in the breed-shaping stud of the 17th Earl of Derby, in fact tracing to one of the very first fillies he sent to George Lambton.

Collusion Illusion certainly seems to have inherited the guts shown by sire and damsire in their Hollywood slugfest. He responded uncomplainingly to a very severe ride last weekend and could do better yet for a seventh furlong, should he proceed to the GI Futurity S. on the closing day of the meet.

He may need to do so, however, if he is to beat the Best Pal runner-up again. Mike Smith wisely let Wrecking Crew (Sky Kingdom) find his way into the race after being left at the gate, but then had to go wide and the colt did well to grab second. A $875,000 pinhook triumph for Wavertree at Fasig-Tipton's Gulfstream Sale in March-he had cost Owls Bloodstock $115,000 at the same firm's July Yearling Sale-Wrecking Crew looks as though he could pay his way for the Roy H (More Than Ready) team of Peter Miller, Rockingham Ranch and David A. Bernsen.

But whatever his future holds, Collusion Illusion has contributed to a real spree for his sire. Twirling Candy failed by just a head to emulate Candy Ride in the Pacific Classic, which likewise proved to be his swansong. In other respects, however, he is very much falling in step with his sire-except, at least for the time being, in the critical respect of their fees.

He typically gets you a bigger, scopier horse, but otherwise the branding is looking very familiar: great balance to his pedigree, yielding exceptional versatility in surface and discipline. You have to love a horse that could run so well in a Pacific Classic, on synthetics, after coasting through Malibu S. splits of 22.72, 44.69 and 1:07.58 to beat a track record set by Spectacular Bid.

These are exciting times at Lane's End, where William S. Farish and his team have numerous new reputations to make. But a roster is all about balance, and between the young guns and veterans like Candy Ride, Lemon Drop Kid and Mineshaft, they need a fulcrum of proven class from those entering their pomp. That's what they have with Quality Road, and Union Rags-and now Twirling Candy is giving himself every chance of breaking into the same tier.