No Foreigners, No Fans, No Problem as FWD Champions Day Arrives 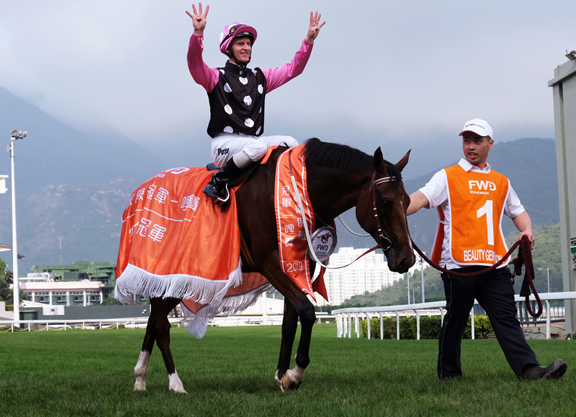 FWD Champions Day at Hong Kong's Sha Tin Racecourse is annually a miniature version of December's Longines Hong Kong International Races, with three Group 1 races offering prize money of HK$63 million (£6.6 million/US$8.1 million) and only a top-level race over 2400 metres missing from the mix. At least some of the buzz about this year's event has been dashed owing to the coronavirus pandemic, which has rendered Champions Day a wholly domestic raceday, but the beat goes on, with the vast majority of the jurisdiction's top gallopers set to make an appearance.

Two-time defending Horse of the Year Beauty Generation (NZ) (Road to Rock {Aus}) may not have been at his best earlier this season–he was only third when trying for the Hong Kong Mile three-peat last December–but he seems to have rediscovered his best form and is the afternoon's marquee runner. The 7-year-old goes for a record-setting third consecutive G1 FWD Champions Mile on a two-race winning streak, and on the doorstep of his compulsory retirement from the Hong Kong training ranks, John Moore is counting his blessings.

“He keeps doing it!,” Moore told HKJC's David Morgan of the gelding, who also holds the Sha Tin track record for 2200m. “Look at what he can do, racing time and time again on firm tracks, the wins he's had, the records he's broken. And they're all gunning for him. He gets out in front and he gets shot at from every angle, but at his best he was so impressive that they were scared to take him on–he's capable of running sectionals that other horses can't live with at a mile.”

Waikuku (Ire) (Harbour Watch {Ire}) is the emerging miler in Hong Kong and registered a breakthrough Group 1 in the Stewards' Cup in January. But he was well below his best when sixth to the champ last time in the Apr. 5 G2 Chairman's Trophy.

“I don't think anything went wrong for him in the Chairman's Trophy,” trainer John Size said. “He had two very strong races [when runner-up] in the Hong Kong Mile and the Stewards' Cup and he might have felt that. He had a break after and maybe just needed a race to bring him back into form.”

Leading jockeys Zac Purton (Beauty Generation) and Joao Moreira (Waikuku) will also go toe-to-toe in the G1 Chairman's Sprint Prize, with the former astride favoured Aethero (Aus) (Sebring {Aus}) for Moore. Third at odds-on in the G1 Hong Kong Sprint, he looks to atone for a last-place effort in the Apr. 5 G2 Sprint Cup in which he was slow away and tailed off in the stretch.

Moreira hops back aboard the Size-trained Hot King Prawn (Aus) (Denman {Aus}), who has bounced back from colic surgery to reaffirm his status as one of Hong Kong's most consistent short-trackers. He will try to go one better off his second-place finish to the upset-minded Voyage Warrior (Aus) (Declaration of War) in the Sprint Cup.

“At the moment this is an opportunity for him to win a big one–he's done everything right going into the race so hopefully he gives it a good shake,” Size said.

Odds are that Tony Cruz will unsaddle the winner of the G1 FWD QE II Cup, as he sends out the three at the head of the market. Exultant (Ire) (Teofilo {Ire}) was runner-up to Japan's Win Bright (Jpn) (Stay Gold {Jpn}) 12 months ago and was third from gate 14 in defence of his G1 Hong Kong Vase this past December. He was rolled as the $1.20 (1-5) chalk in the course-and-distance G1 Citi Hong Kong Gold Cup Feb. 16, as stablemate Time Warp (GB) (Archipenko) proved too tough to reel in up front. Cruz also sends out 2019 Hong Kong Derby hero Furore (NZ) (Pierro {Aus}), who ran on well to be fourth in the Chairman's Trophy in his first start for the Cruz yard.