No Exaggeration, This Curlin Colt is Special 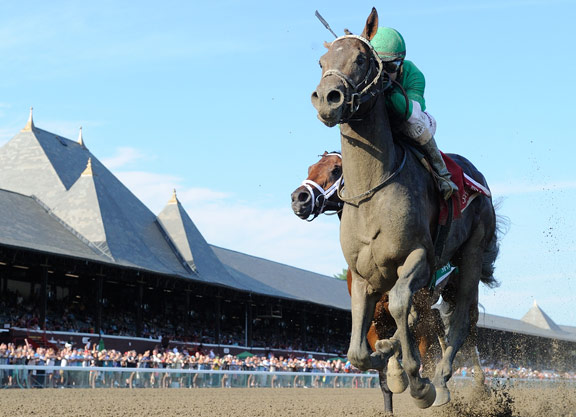 Exaggerator lacked running room for the majority of the race, but persevered in the end to capture the GII Saratoga Special S. at the Spa Sunday afternoon. Exaggerator has two previous West Coast starts under his belt before trying stakes company in New York Sunday. In his debut, Exaggerator was parked at the back of the field at Santa Anita June 5 and registered a mile rally to finish a well-beaten fifth going five panels. The Curlin colt stalked the pace during his second start going six furlongs at Del Mar July 25, was blocked in on the rail and had to be taken up before swinging out about six wide at the top of the lane and closing determinedly to win narrowly, earning an 8 Thoro-graph number. Adding an extra half-furlong for this one, the colt assumed position at the rear of the field as John Q. Public (Proud Citizen) and favored Saratoga Mischief tussled through fractions of :21.60 and :45.19. Gaining ground in piecemeal fashion along the rail behind a quickly condensing wall of horses turning for home, he was temporarily stymied, but finally found a seam between rivals in midstretch. He battled with the fiesty Saratoga Mischief down the lane, gained a narrow margin in the final furlong and edged clear late. Exaggerated is the third foal out of the stakes placed Dawn Raid (Vindication). He has a yearling half-sister by Pioneerof the Nile and a weanling half-sibling by Artie Schiller. Dawn Raid was bred back to Curlin this year. Exaggerator also hails from the family of Canadian champion Embur's Song (Unbridled's Song) and Queen's Plate hero Niigon (Unbridled).

“I wasn't sure if he could get through on the rail and then he burst between the two,” said Julie Clark, assistant to winning trainer Keith Desormeaux. “I thought that showed some real class for a baby. He flew out [of Lexington] Monday and vanned out the next day. He got two gallops over the track, so you always wonder if he's still sharp. I'm glad it worked out. We would've liked a little more time, a little more rest, but he's pretty sharp. He's always on his toes and he never really seemed dull.”

Winning jockey Junior Alvarado said, “I watched his last race. He won it by a nose but he won gamely. He handled being between horses pretty good, so I knew if I did ask him to go inside, I knew he'd be there. I tried to save ground as much as I could. As soon as I decided to go inside, I thought I had a chance to win the race and he was there for me. He's professional; he lets you do whatever you want.”

This story was posted in Today's Edition, Top News and tagged Exaggerator.