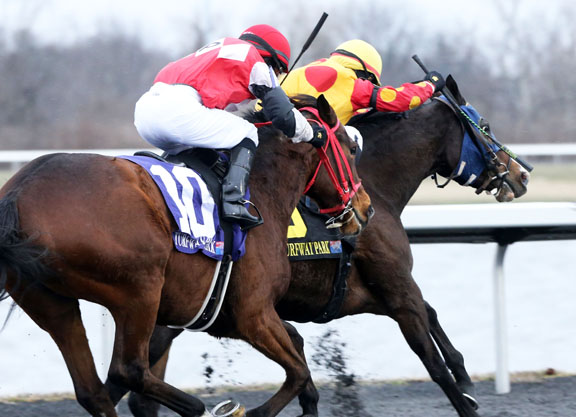 For the second straight month, the California Horse Racing Board (CHRB) has postponed voting on a motion pertaining to the exact specifications of whips that jockeys and exercise riders would be allowed to use.

After 35 minutes of input from jockeys and the public at Thursday's monthly meeting in Sacramento, the board made a unanimous 4-0 vote to table the measure.

Several CHRB members cited a desire to seek broader input that they hoped would help fine-tune the proposed amendments to CHRB Rule 1685. That was the same reasoning given when the CHRB postponed voting on a slightly different version of this rule amendment Jan. 22.

It's important to note that the proposed changes to Rule 1685 deal only with codifying how the whips are constructed, with the intent of making permitted whips adhere to more humane and safety-centric standards.

Thus, Thursday's discussion was not directly related to the proposed changes to Rule 1688 that the CHRB advanced Dec. 12, 2019.

That separate rule is the “six underhanded strikes per race, only two in succession” enforcement action that was unanimously approved and sent out for the state-mandated 45-day public commentary period. It has yet to resurface for a final vote.

The Rule 1685 amendments that were debated Thursday were initially crafted in January to incorporate the specifications for the 360 Gentle Touch (GT) riding crop, which is the design manufactured by retired Hall-of-Fame jockey Ramon Dominguez.

The 360 GT has no stitching and a cylindrical popper made of foam that is designed to decrease welts and cutting while producing a louder audible sound that purportedly startles horses into running faster. This type of modified whip allegedly does not cause as much physical damage as the traditional (short-popper and leather-fringed) whips that are being phased out of the sport worldwide.

During the Jan. 22 meeting, representatives of the Jockeys' Guild spoke out against re-crafting Rule 1685 so that the rule's specifications dovetailed so closely with one specific model of whip, arguing that a “one size fits all” mentality would not work. They also lobbied against a provision that would have required racetracks to control and assign conforming whips to jockeys for each and every race.

So over the past month, CHRB staffers retooled the amendment with some of the Guild's input in mind. The revised measure that came up for voting on Thursday was without the requirement that tracks supply whips to riders, and it did include a different minimum circumference measure to allow for a more tapered popper than the 360 GT currently uses.

But Shane Gusman, an attorney representing the Jockeys' Guild, tactfully tried to underscore that the latest round of tweaks still too narrowly defines a whip's specifics with reference to the 360 GT.

“We're totally for and supportive of innovations and equipment that make the sport safer,” Gusman said. “What we want to ensure though, is that it actually works in practice, and that it doesn't have any unintended consequences in use. And I think the way the rule is drafted and the specifications have some of those unintended consequences.”

The big question, Gusman postulated, remains “Is this equipment on day one readily available for 100% of the jockey community in the state of California to be able to obtain?”

“I don't know if we have an adequate answer to that,” he rhetorically answered.

“And secondly,” Gusman continued, “I would caution [against] adopting a rule that is so specific that perhaps only one manufacturer can satisfy the rule.”

Commissioner Wendy Mitchell said she saw logic in that argument, and she also sympathized with testimony from jockeys about the CHRB insisting on whip specifics that have yet to be widely studied, either in California or in other jurisdictions.

“I guess my concern here is we're going to be mandating something that's really untested,” Mitchell said. “I don't know if there's a way to phase this in, or give it a trial period for jockeys to try it out before it's mandated…. I don't feel that we have enough information in order to make decisions on what should be used or what's going to be effective.”

Mitchell said she also had misgivings about the CHRB, which is a governmental entity, essentially mandating that a whip from a specific manufacturer be used, as opposed to providing parameters that would enable other whip manufacturers to bring products to the marketplace.

Even though she expressed support for allowing multiple manufacturers to market conforming whips, Mitchell expressed skepticism to Gusman's claim that the 360 GT manufacturer would be able to patent something seemingly so simple as a piece of cylindrical foam.

“You'd be surprised what you can patent,” Gusman replied.

Commissioner Alex Solis, a retired Hall-of-Fame jockey, said the more choices jockeys have in selecting the tools of their trade, the better.

Vice chair Oscar Gonzales said just prior to the vote to table the motion that he understands there is frustration on both sides of the issue because of how long it's taking for the two whip-related rules to be crafted. But in the bigger picture, he noted that California stewards and jockeys are already embracing the coming changes, even though they have yet to be codified.

“We're trying to get this right,” Gonzalez said. “I really believe that I've seen change, I really have. I know we're still getting some fines and penalties [for whip-use violations], and to the point of the public, [those penalties] should be a lot more stiff. But I am noticing this cultural change within the ranks of the jockeys, where they're hand-riding more, they're being a lot more selective. And perhaps this is just to gear up for change that is on the way.”