NJ Casino Referendum Could Provide a Boost to Monmouth 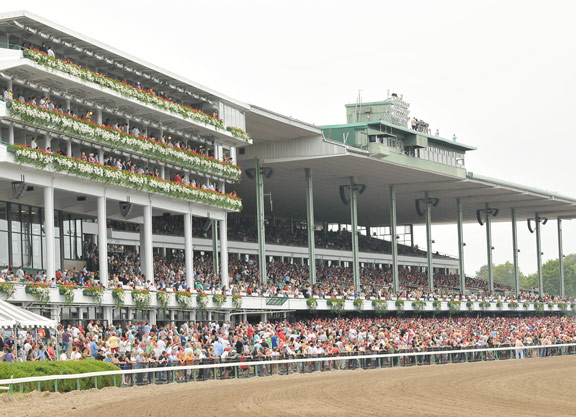 New Jersey lawmakers approved a constitutional amendment Monday that would allow casinos to expand outside the city limits of Atlantic City. With that hurdle having been cleared, the future of casinos in the state will now be decided by New Jersey voters this November.

Monmouth Park will not have a casino as the amendment called for any new casinos in the state to be more than 72 miles from Atlantic City. The amendment allows for two casinos, and the heavy favorites to land them are the Meadowlands and a proposed casino in Jersey City. A portion of the revenue from both casinos will go to towards horse racing, with a 50-50 split between standardbred and thoroughbred racing.

“We are disappointed that Monmouth Park has been eliminated as a possible location for a casino,” said Dennis Drazin, an advisor to the horsemen's group that operates Monmouth. “On the other hand, getting casinos in the state outside of Atlantic City and having casinos that contribute to the racing industry has been something we have been fighting for for many years and I am pleased we finally took this positive step forward.”

Of course, the voters must first approve the referendum. Meadowlands owner Jeff Gural believes they will.

“I have been told by the experts that this will be approved in November,” he said. “They did some polling and it showed that as long as we do a good job of getting our message out this will be approved. One troubling aspect of those polls is that when they asked voters in North Jersey casinos were important because they would save horse racing in the state the majority said no. That issue isn't resonating with the people.”

Gural's confidence could be misplaced as a Rutgers-Eagleton poll released last week showed that 49 percent of New Jersey voters believed that casinos should be restricted to Atlantic City, while only 44 percent were in favor of an expansion outside of Atlantic City.

Another troubling aspect of the legislation is that it calls for only 2 percent of the profits to go towards purses, with that amount split between the two breeds. Horsemen were hoping to get as much as 10 percent of the revenue for purse money. The 2 percent figure could go up as enabling legislation could call for a larger cut and there is also hope that Gural will make so money as the casino operator at the Meadowlands that he will be compelled to share some of his profits with thoroughbred and standardbred horsemen.

When asked what he thought the chances were that the Meadowlands would get one of the two casino licenses, Gural responded: “100 percent.”

If it gets a casino the Meadowlands will be required to partner with one of the companies that have existing casinos in Atlantic City. Gural said MGM and Caesar's are two possible partners.

Even if the voters approve the new casinos, it will likely take a significant amount of time before they are open for business, meaning Monmouth will have to do make do without casino money for 2016 and 2017 and, perhaps, even longer.

“You always want the best deal possible and you always want things to happen as quickly as possible,” Drazin said. “But this could mean a whole new ball game for New Jersey racing and give us much better opportunity of competing against all the neighboring racing states that have casino-funded purses.”