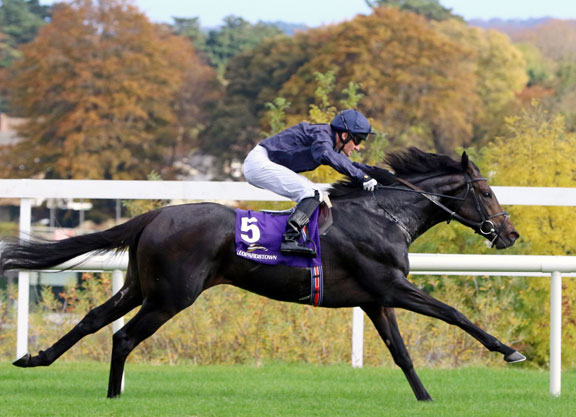 Galileo's pinnacle at stud came via Frankel (GB) and the “Frankel factor” is a key topic again here. Although the Juddmonte immortal never undertook the Derby challenge himself, he has two strong contenders from his first crop in Cracksman (GB) and Eminent (Ire) in 2017. Drawn favourably in seven and four, respectively, the former is charged with the responsibility of following in the footsteps of fellow Anthony Oppenheimer-owned and bred Golden Horn (GB) (Cape Cross {Ire}). While he lacks vital conditioning at the racecourse, having been forced to swerve the G2 Dante S. due to the downpours at York, he did beat that contest's winner Permian (Ire) (Teofilo {Ire}) in the Investec Derby Trial over 10 furlongs here on Apr. 26 and looked as if this extra trip would play to his strengths.

Oppenheimer is cautiously optimistic as he ponders a second blue riband in three years. “Cracksman is a lovely, laid-back horse, but he's quite different to Golden Horn,” he said. “Golden Horn had an awful lot of speed and John Gosden always felt he could have won the 2000 Guineas if he hadn't been as immature as a 2-year-old. This horse doesn't have that speed. I just hope he has enough at the end of the race on Saturday.”

Missing the Dante is a drawback to Cracksman's chances and leaves his owner-breeder in the dark as to his standing in this year's renewal. “John feels he's improved considerably since he last ran and his form looks good after the horse he beat at Epsom won the Dante, but I can't say I'm confident,” he added. “John and Frankie are both very confident this horse will stay as he is so laid-back, but he does need to improve a great deal. I can't see him finishing any better than third or fourth myself, but I wasn't confident about Golden Horn winning the Derby, either, as I didn't think he'd stay.”

Whereas John Gosden understands the thrill of winning this prize, fellow trainer Martyn Meade is a relative novice in this type of arena, but in Eminent he has a colt with all the main credentials to provide a landmark success. He lined up for the G1 2000 Guineas one of the leading protagonists after beating the subsequent G1 Poule d'Essai des Poulains third Rivet (Ire) (Fastnet Rock {Aus}) and the Dante runner-up Benbatl (GB) (Dubawi {Ire}) in the G3 Craven S. at Newmarket on Apr. 20 only to finish sixth in that May 6 mile Classic. As his second dam Quarter Moon (Ire) (Sadler's Wells) was runner-up in the 2002 Oaks, Sir Peter Vela's bay is more likely to thrive in this test than one which favoured the speed horses over a mile, and he impressed with his spin at the “Breakfast With the Stars” morning.

“It's a big responsibility and a privilege having him, but that is what it is all about, that is what you work towards–having a horse that has got a chance in the Derby,” Meade commented. “At this stage, it is just another horse race and I have got to get him there in good nick to do himself justice. After that, the realisation of what it's all about might just kick in.”

Meade's sense of pressure is intensified by the weight of expectation placed on Eminent by his famed sire. “There is a huge hype about the Frankel factor. While there are lots of them about and lots of good ones, it would be quite nice to have the first one to win a British Classic,” he added. “I think his run in the Guineas was down to a combination of factors. He had to have pace, as he doesn't quicken because he is not an out-and-out miler. When Jim [Crowley] realised there was no pace on it was a bit late to do anything and he was stuck behind other horses and he had to pull out and make a sprint of it. Secondly, it maybe came a bit quick and thirdly he would have liked a little bit of cut in the ground to let himself down a bit in that final furlong.” Of his recent Epsom exercise, Meade continued, “The idea of going there was to get him used to the track going round the bend and down the hill and then quicken away a little bit up the straight,” he said. “In the end he did some pretty good times. We had this satellite thing on him and he was clocking over 40 miles per hour for the last three furlongs. When you watched him, it didn't look like he was moving much at all. The great thing about that was he was hard on the bit all the way through and Jim took time to pull him up. Jim was really pleased how he came into the top of hill, changed legs and was always on the right lead all the way down. He coped with the downhill bit and was perfectly balanced. He never had the slightest worry about him.”

Only two recent winners have overcome a draw higher than 10 and they were the “good things” Australia (GB) in 12 and Authorized (Ire) in 14. Joseph O'Brien partnered the former and also Camelot (GB) and bids to emulate Harry Wragg in becoming the first since 1961 to ride and train a blue riband hero. Lloyd Williams's Rekindling (GB) (High Chaparral {Ire}) is his representative and he beat Douglas Macarthur (Ire) (Galileo {Ire}) and Capri in Leopardstown's G3 Ballysax S. over 10 furlongs on Apr. 8 prior to finishing third in the Dante. “I've never really thought about creating history or anything like that, to be honest,” Joseph said. “When you train racehorses it's a 24-7 job, you don't really get much time to think of things like that. When you have a horse like him who has won a trial in Ireland and run well in traditionally the best trial in England, you have to have a go at the Derby. You never know how many times in your career you will have a legitimate Derby horse, you might not get one again. One thing Rekindling has in his favour is experience. On reflection, I thought our lad ran a good race at York. He was staying on again and did well to finish as well as he did because he didn't like the ground. At the moment there is no stand-out contender and you wouldn't be surprised if there was a 20-1 winner, but you can guarantee after the race there'll be [a standout]. Something will come out of the woodwork. This could be the year for a surprise and if it's ours, we'll be delighted.”

Diore Lia Back In The Mix…

The sensational story of Derby entrant Diore Lia (Ire) (Yeats {Ire}) took another turn on Thursday morning when it was revealed that jockey Paddy Pilley will take over the reins on the 1000-1, 52-rated filly. Diore Lia was paid up for the Derby by owner-breeer Richard Aylward in order to draw attention to and aid in his fundraising efforts for the Great Ormond Street Hospital, but Aylward told Racing Post late on Wednesday that the filly would not run after the BHA announced one-time winning apprentice rider Gina Mangan would not be permitted to take the ride, citing safety reasons due to her inexperience. Diore Lia stayed engaged, however, on Thursday morning with Pilley, a five-pound claimer retained to Roger Charlton, set to take the ride.

“The horse is declared to run,” Aylward told Racing Post on Thursday. “How could I stop the horse running when there have been donations coming from America? The charity is the number one. That's why I started this over a year ago. They are not stopping us running over this.”