Nine in Line for Competitive Wood 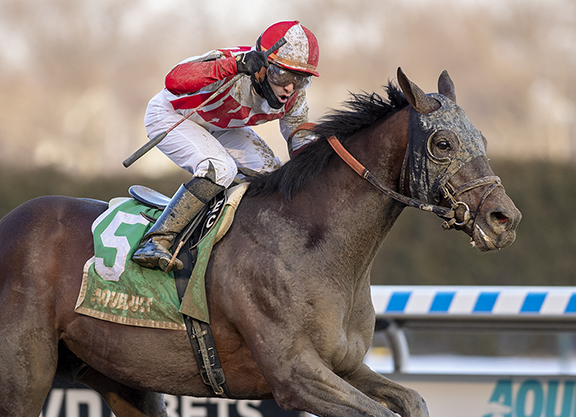 Realistic cases can be made for six or seven of the nine 3-year-old males signed on for Saturday's GII Wood Memorial S. as the New York staple GI Kentucky Derby prep returns with a competitive renewal after a one-year hiatus due to COVID-19.

Given the narrowest of nods on the morning line is Klaravich Stables' Risk Taking (Medaglia d'Oro). Unable to factor in his first two outings, one sprinting on dirt and one routing on yielding turf, the $240,000 Keeneland September buy sprung to life when returned to dirt over Saturday's nine-furlong trip with a clear graduation here Dec. 13. He followed that up with a strong rally to win the local GIII Withers S. Feb. 6.

The waters get significantly deeper in here though, and one need look no further than the presence of Godolphin's undefeated 'TDN Rising Star' Prevalence (Medaglia d'Oro) to confirm that. Rocketing away to a devastating 8 1/2-length victory on debut going seven panels Jan. 23 at Gulfstream, the Brendan Walsh trainee stretched out a furlong in an allowance/optional claimer there Mar. 11 and wasn't quite as impressive while still winning by three lengths as a 1-10 favorite.

The first two finishers from the GIII Gotham S. here Mar. 6 return and figure as major players. Dismissed at over 46-1 that day, Chiefswood Stable's homebred Weyburn (Pioneerof the Nile) dug in resolutely through the stretch to just nose out Klaravich Stables' Crowded Trade (More Than Ready). The latter was making just his second career start after graduating on debut when hammered down to even-money over a local six furlongs Jan. 28.

The blue-collar returnee Brooklyn Strong (Wicked Strong) demands attention as well. Bought for just $5,000 as an OBS April juvenile, the gelding debuted a winner against $40,000 maiden claimers at Delaware and has gotten better in every start since, running third in the New York-bred Bertram F. Bongard S. and winning the Empire-bred Sleepy Hollow S. 22 days later before gutting out a score in the track-and-trip GII Remsen S. Dec. 5. Unseen since then, he shows a sharp worktab for trainer Danny Velazquez at his Parx base, including a five-furlong bullet in :59 3/5 (1/16) Mar. 20.