Night To Remember For Awbeg Stud 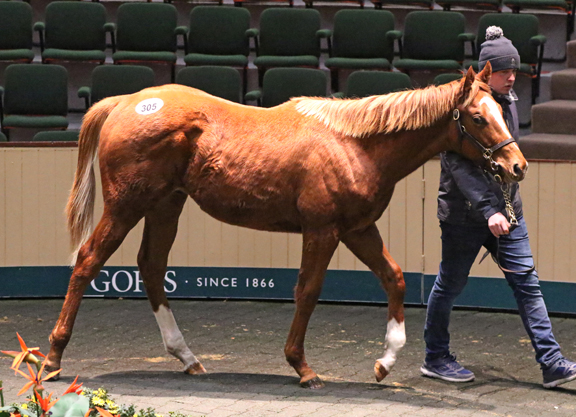 Lot 305, by Night Of Thunder, led the way for Awbeg Stud | Peter Mooney/Goffs

KILDARE, Ireland—Whether it was for the offspring of proven, emerging or first-season sires, the pinhookers were out in force on Tuesday at Goffs, where the trade stepped up a level from a decent opening session to post gains in all bar one sector and a strong clearance rate of 85%. That figure jumped from 76% for the corresponding session last year, with the 196 foals to have been sold pushing the aggregate up by 17% to €6,588,200. The average rose by 4% to €33,613 and the median was the one indicator which stayed level at €26,000.

Awbeg Stud’s 37,000gns purchase of the Aqlaam (GB) mare Southern Belle (Ire) at Tattersalls last December reaped almost instant rewards when her first foal, a colt by Night Of Thunder (Ire) (lot 305) was bought for €135,000 by Richard Brown of Blandford Bloodstock with Coolmore as underbidder.

The 6-year-old mare was a treble winner herself and is a half-sister to listed-winning juvenile Go Angellica (Ire) (Kheleyf), but of more relevance to Brown is another of the mare’s half-sisters, Bredendury (Ire), who is also by Night Of Thunder and won this year over six furlongs at Brighton.

“He’s been bought for Corduff Stud to come back next year,” Brown said. “I know the family as I bought Bredenbury for Andrew Stone and she has now gone to Graham Motion in America. We’re hoping for a bit of a pedigree update as Bredenbury is being aimed at a stakes race at Gulfstream Park in January. Night Of Thunder is doing so well and he has now equalled the record for the number of stakes winners for a first-season sire.”

It was the Night Of Thunder factor which appealed to Awbeg Stud’s James Fleming when buying the 6-year-old mare from Godolphin. He said, “We sold a Night Of Thunder yearling well last year and we had it in our minds to try to buy a mare in foal to him.”

Altenbach To The Fore Again
Another first foal, and one of only two colts in the sale by Haras d’Etreham’s Wootton Bassett (GB), brought another good result for Tom and Alexandra Whitehead’s Altenbach Bloodstock, which topped Monday’s session with a son of first-crop sire Caravaggio.

Philipp Stauffenberg is never shy when it comes to expensive pinhooking prospects and he bid €130,000 for the top horse on his list on Tuesday (lot 439), a son of the juvenile winner and Group 3-placed Holy Cat (Ire) (Kitten’s Joy), who was bought from Qatar Bloodstock for 65,000gns two years ago.

“He was the best-moving foal of the day and he has been bought for a partnership which knows plenty about the stallion,” said Stauffenberg.

Profitable Business
Darley’s debutant Profitable (Ire) is proving to be just that so far this week, with his most expensive lot of the sale coming within the last handful of lots on Tuesday evening. The chestnut colt (lot 535) has two decent half-brothers to recommend him—one of which, Sopran Ival (Ire) (Ivawood {Ire}), had won a listed race since the publication of the catalogue—and his own physical attributes pushed Eddie Lynam to €120,000 in order to secure him.

“He’s a beautiful horse and a half-brother to two stakes winners,” said Lynam of the son of French juvenile winner Reign (Ire) (Elusive City {Ire}) who was bred by Australia’s Rosemont Stud and consigned on their behalf by Airlie Stud.

More Fresh Faces
Profitable’s fellow Darley stallion Ribchester (Ire) was himself a graduate of the Goffs November Foal Sale, sold by Kilmore Stud to Jamie Railton for €78,000 back in 2013. Six years on, the first foals of the champion miler are now being offered at Goffs and, from 15 offered, 12 have been sold for an average of €33,083.

At the head of the group was lot 426, a filly from the family of the Arc winner Rail Link (GB) (Dansili {GB}), bought for €100,000 by Peter Doyle. A half-sister to the listed winners Portage (Ire) (Teofilo {Ire}) and Cape Magic (Ire) (Cape Cross {Ire}), she was bred by Barbara Prendergast and consigned through Yeomanstown Lodge Stud.

The agent had previously bought the filly’s year-older half-brother by Sea The Stars (Ire) as a foal last year at Tattersalls for 130,000gns on behalf of Ger Morrin’s Pier House Stud, which then sold him at Book 1 of the October Sale for 220,000gns.

“He’s now with Richard Hannon,” said Doyle of the yearling. “This foal will be resold next year, also through Pier House Stud.”

Another young stallion with first foals at the sale is the National Stud resident Aclaim (Ire) and one of his colts (lot 308)—a son of the Nayef mare Step Sequence (GB) bred by Kiltown Bloodstock—joined the list of Tally-Ho Stud purchases at €95,000.

Though Step Sequence was unraced herself, she has made a good start to her broodmare career as the dam of the Joseph O’Brien-trained Lady Penelope (Ire). The well-travelled daughter of Night Of Thunder won at Down Royal in August and has since been runner-up in the listed Harry Rosebery S. at Ayr and fourth in the G2 Criterium de Maisons-Laffitte.

Continuing a good opening day for Decorated Knight (GB), the final foal by the Irish National Stud stallion in Part 1 of the sale (lot 507), offered by Whitehorn Bloodstock, was bought for €66,000 by Charlie Vigors of Hillwood Bloodstock, bringing the freshman’s average to €36,833 for six sold.

Stars In The Making
Starspangledbanner (Aus) featured among several of the leading lots of the second session. Lot 281, the second foal of the Sir Percy (GB) mare Scarlet Pimpernel (GB), was one of three colts bought by Harry Sweeney of Paca Paca Farm, who raised a bid of €110,000 for the Pat Beirne-bred weanling. His dam, a dual winner in France for Jerome Reynier having been bought inexpensively as a juvenile by Sam Hoskins, is a half-sister to the G3 Nell Gwyn S. winner Scarlet Runner (GB) (Night Shift).

Later in the day lot 373, a Starspangledbanner grandson of Irish champion 2-year-old Bianca Nera (GB) (Salse), went the way of Flash Conroy of Glenvale Stud at €90,000.

The colt’s dam Biaraafa (Ire) (Araafa {Ire}) is a half-sister to Ever Rigg (GB) (Dubai Destination), whose offspring include the Group 1 winners Postponed (Ire) (Dubawi {Ire}) and God Given (GB) (Nathaniel {Ire}).

Camelot fillies have proved popular so far at Goffs and pinhookers Mick Fitzpatrick and Barry Mahon went to six figures to secure lot 413, a daughter of the Normandie Stud-bred Ethel (GB) (Exceed And Excel {Aus}), at €100,000.

Consigned by Chapel Lane Bloodstock, the filly was bred by O’Connor International.

Picture Perfect
With one member of his first crop having topped the first day of trade at €100,000, Coolmore’s Caravaggio had just one weanling go through the ring on Tuesday (lot 347) and the colt from Grenane House Stud was the selection of Italian breeder Paolo Picchi, owner of the Normandy-based Haras du Grand Lys, at €82,000.

The third foal of his 6-year-old dam Yet Again (GB) (Oasis Dream {GB}), he owns a smart Juddmonte pedigree with the G1 Yorkshire Oaks winner Quiff (GB) (Sadler’s Wells) as his grandam and 1000 Guineas winner Wince (GB) (Selkirk) as his third dam.

Another ten Caravaggio foals are set to sell on Wednesday.

The final day of the first part of the Goffs November Foal Sale takes place from 10am on Wednesday, with the Breeding Stock Sale starting on Thursday and part two of the foal sale to follow on Friday afternoon.