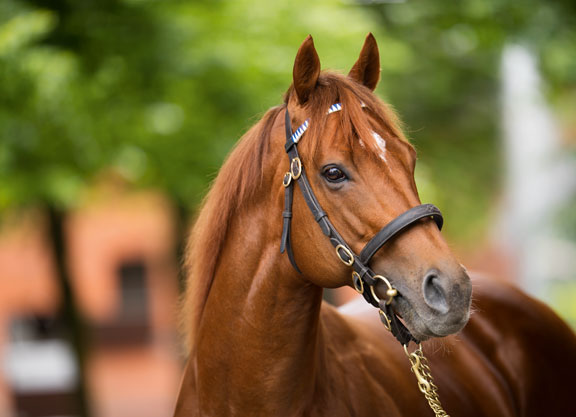 Unbeaten bar a latest blip in testing ground in the G1 Commonwealth Cup at Royal Ascot June 18, George Strawbridge's Suesa (Ire) (Night of Thunder {Ire}) bounced back to her brilliant best in Friday's G2 King George Qatar S. at Goodwood. Sent off at 7-1, the Apr. 20 G3 Prix Sigy and May 17 G3 Prix Texanita winner chased the frantic early pace which saw the four-times winner Battaash (Ire) (Dark Angel {Ire}) sitting off it throughout the early stages. Coming alive for William Buick at halfway, the Francois Rohaut-trained bay powered by Dragon Symbol (GB) (Cable Bay {Ire}) approaching the furlong pole en route to a three-length dismissal of that fellow 3-year-old, with Glass Slippers (GB) (Dream Ahead) the best of the older sprinters 1 1/2 lengths away in third. Battaash, the 2-1 favourite, found little when the crunch came and trailed in seventh. “It was an amazing performance,” the in-form Buick said after steering his sixth winner of the meeting after his success in the other “King George” at Ascot on Saturday. “She travelled through the race very strongly and had that kick at the finish off a fast pace. It was bad ground in the Commonwealth Cup and she couldn't get any cover early over six furlongs, so she ended up running her race the wrong way round there. Everyone had put a line through that and I wanted to let her travel where she was comfortable here, so it was just about getting a run. She has a great attitude and is very calm–she's just a very good filly.”

Racing for owner Georgina Cabrero and trainer Carlos Laffon-Parias initially, Suesa scored in a debutantes contest over six furlongs at Chantilly in October before following up over 5 1/2 furlongs back at that venue in the Listed Prix Yacowlef the next month. Doing enough to draw attention from George Strawbridge as a result, she provided an instant return on his investment when taking the Sigy over the Yacowlef course and distance before winning with just as much authority over six on her fourth start at Chantilly in the Texanita. Sent off the 9-4 favourite for the Commonwealth, she was beaten two out and faded to eighth after racing prominently and it was a case of back to the drawing board for connections.

Entering this aggressive test of pace something of a forgotten filly as a result, it turned out to be tailor-made for her racing style and the true Suesa was in evidence as she brushed aside some leading sprinters including Shadwell's lord of the manor in a watershed moment for this prize. Always travelling within herself following Dragon Symbol and Arecibo (Fr) (Invincible Spirit {Ire}) as the race regular Ornate (GB) (Bahamian Bounty {GB}) blazed the trail, she was off the bridle and working as Battaash was still hard on the steel for Jim Crowley out wide with 1 1/2 furlongs remaining. While his effort petered out remarkably quickly, Suesa's surge was relentless to make the speedy Dragon Symbol and Glass Slippers appear relatively pedestrian late on.

James Wigan, racing manager for George Strawbridge, said, “We thought she was very good before Ascot and then the rain came and the ground was bottomless. She just couldn't act on it, luckily we took her home and she was okay. Her form in France before was very impressive, but we didn't know what she'd be like over here. There aren't really many deep sprint group races in France in the summer, so this was the obvious place to come. As for a run at York [in the Aug. 20 G1 Nunthorpe S.], it depends what she is like when she gets back. She'll have had quite a lot of travelling, coming here and then going back, then coming again having already done Ascot. The [Oct. 3 G1] Abbaye will be the obvious target. There is a very good chance she will stay in training next year, as the owner is very much a sportsman.”

Oisin Murphy was left feeling deflated by another runner-up finish for Dragon Symbol. “He is better than that. It's a shame the good ones weren't drawn beside him, we followed the wrong ones,” he said. Glass Slippers' trainer Kevin Ryan was pleased with the effort of the mare on her seasonal bow. “We would like to have got a racecourse gallop into her, but the ground has been so firm everywhere. We didn't want to risk doing that,” he said. “We knew coming here she was going to need the run. We can look forward to the rest of the year now. We will have a chat over the weekend, but we will generally take the same sort of route, the race in Ireland [the Sept. 12 G1 Flying Five] I would imagine will be on the agenda. It will be a nice chat to have on Sunday morning.”

Charlie Hills was inclined to blacme the ground for the uncharacteristically tame effort of the favourite. “He had a good trip and although there was a lot of pace on the other side of the track he came into it nice and strong,” he said. “l was a little bit concerned about the going here today and he didn't handle it as well as he could have done. We were happy that he was doing everything he's done in the past few years and there was no difference really. We'll see how he comes out of this and speak to the management and Sheikha Hissa and see where we go.”

Jim Crowley added, “The ground was probably slow enough for him. He travelled well early and showed plenty of enthusiasm. Even cantering down, I thought the going was slow enough.” Shadwell's Angus Gold refused to give a kneejerk reaction, but seemed to be suggesting that retirement could beckon now. “He had an injury last year and it took him a long time to come right. He's had issues all his life and I think it's remarkable that he's back with us at all,” he commented. “I'll speak to Sheikha Hissa. He is her horse and the last thing we want to do is abuse him. After all the problems he's had and him being seven, why would we go on now? Ascot I thought was a good run given how long he had been back in the yard. Today was not so good. Obviously, Charlie and the team would like to keep him in the yard, but there comes a time for all of us.”

Suesa is out of an unraced half-sister to the Listed Radley S.-placed Sheboygan (Ire) (Grand Lodge) and daughter of the Listed Tyros S. third White Satin (Ire) (Fairy King). The latter is kin to the stakes-winning and GII Honeymoon H.-placed Chenille (Ire) (Tenby {GB}) and the group 3-placed Sweet Treat (Ire) (Orpen) connected to the dual listed-winning and dual group-placed sprinter Nights Cross (Ire) (Cape Cross {Ire}). This is the family of the Sadler's Wells duo of luminaries Barathea (Ire) and Gossamer (GB) and the multiple group-winning sire Desert Style (Ire) (Green Desert). Sally Is the Boss, whose previous best was the Spanish champion juvenile colt Valle Inclan (Ire) (Elusive Pimpernel), also has the unraced 2-year-old filly Celebrate In Style (Ire) (Estidhkaar (Ire) and a yearling colt by The Last Lion (Ire).