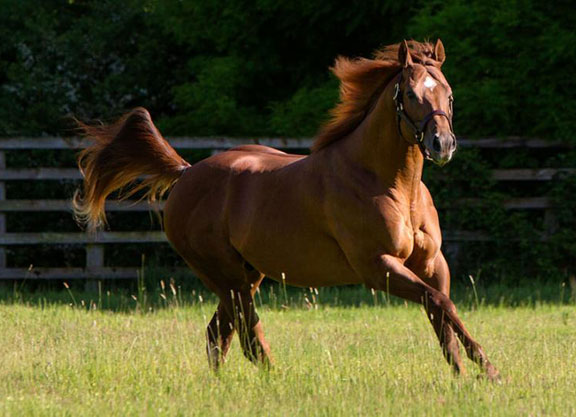 Mauiewowie, successful going five furlongs at Naas in her July 2 unveiling, ran second back over the same trip in that track's July 20 Listed Marwell S. last time and made the leap forward with a career high in this straight dash. Positioned behind the pace in a handy third after an alert getaway, she loomed large on the bridle when joining the front rank with a quarter mile remaining and was driven out inside the final furlong to outbob Marwell third Treasure Trove on the line in a thrilling conclusion.

“She's a lovely filly and a filly we always liked,” said trainer Ger Lyons. “We have a load of backward 2-year-olds at home and she's the one that has always been precocious. She's by Night Of Thunder, one of my favourites if not my favourite sire, and Kris Weld just told me that she's a granddaughter of Nightime, so she has the pedigree. I was very worried about today's ground, but they've done a marvellous job. We'll see how she comes out of it, we won't rush her and we'll let her come along. She'll come into her own over six furlongs with a little bit of juice [in the ground]. We have loads of options now, including the [Listed] Blenheim over six furlongs [at Fairyhouse], but I'll let her grow up because she's a work-in-progress. She'll be a lovely horse for next year. [Owner] Eleanora [Kennedy] is the lucky charm, she's a very lucky owner and I think that's her 10th or 11th winner since she joined me. That just doesn't happen.”

Ger Lyons lands the @curraghrace Listed Qatar Racing And Equestrian Club Curragh Stakes for a remarkable sixth time in the last nine years with Mauiewowie, who got up right on the line under @ctkjockey. pic.twitter.com/pqt6SorOHt