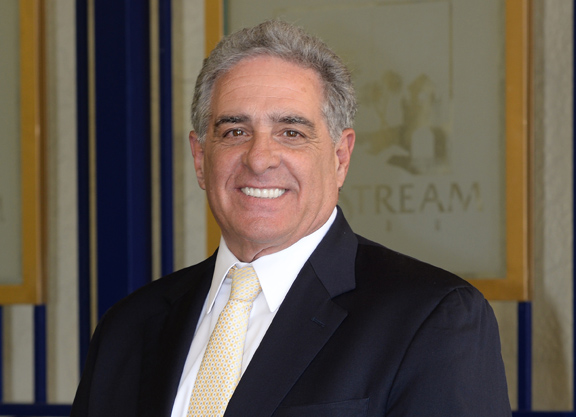 A longtime handicapper and TV personality in Southern Florida, Ron Nicoletti has spent the better part of the last 15 years as one of the handicappers and TV talent at Gulfstream Park in Hallandale, Florida. And while it may seem there was never a time without a Nicoletti tip sheet or on-air analysis, it can be argued that the 70-year-old has amassed several lifetimes prior to embarking on his latest act in horseracing. A kid from Corona, New York who was instrumental in launching a trendy Manhattan boutique in his 20's, Nicoletti found success in the ultra-competitive world of fashion, traveled the globe and hobnobbed with the stars before launching an enduring career in horseracing.

Life in the Fast Lane
Raised in Corona, New York, Nicoletti is the second of three children of Frank and Dolly Nicoletti, who took up residence in the expanding Queens County city–adjacent to the site of the World's Fair (1964-65) and former Shea Stadium–in the 1940s.

“I grew up in Corona, Queens in a very big and fun-loving Italian family,” he said. “If you're looking for the spot, it was right by the World's Fair or where Shea Stadium was, the baseball field in New York. I had a really fun childhood with the family. All the Nicolettis love to laugh, and it was always a great childhood. My mom passed away when I was younger, but my dad and my family were so close. My brothers, my sisters, just a fun family. I have such fond memories of that.”

Despite not having any close ties to sports growing up, Nicoletti was exposed to many of the nation's pastimes given his proximity to some of the regions' most important sporting venues, including horseracing.

“Growing up, I loved bike riding, which I still do to this day, and from a young age, my family always loved going to the track,” he said. “I had an uncle, Mike, and my cousin, Tom, whom I idolized and I went to the track [with them]. I was just amazed how they could figure out what was happening at the race track.”

After returning from his stint in the Army, a chance encounter with a friend led Nicoletti to an introduction into the fashion industry. Engaged as a driver to the owner/designer of a highly-regarded Manhattan boutique, Nicoletti learned the basics of the trade.

“I just watched what was done day-to-day–designing clothes, cutting clothes and everything like that,” he recalled. “Finally, I was given a job as the assistant manager, then the manager of the clothing store—PJ Boutique in Greenwich Village.”

With some experience under his belt, Nicoletti invited childhood friend–Richard Famiglietti–to get into the business.

“We borrowed $3,500 each from our parents, and we opened up a clothing store in Manhattan called Jenny Waterbags. We chose the name Jenny Waterbags, because of a woman that lived in our hometown, Corona. She would chase us, so we jokingly called her 'Jenny Waterbags'.

And it didn't take long for the 'casually swank' boutique to take flight.

“For a while, the store just eked along, but it got more popular and more popular,” he explained. “We started getting some press. And it was a bit off the beaten path. We were one of the first clothing stores to open up in Gramercy Park on 19th Street in Manhattan.”

With the new-found popularity, the quality of clothing improved, and as a result, it began to draw a different branch of clientele, including Elton John, Bianca Jagger and Focus' Jan Akkerman.

“All the sudden we became popular,” he recalled. “Then, everything changed. We started making better clothes, pants and jackets. People were coming in. It was amazing. We made clothes for John Lennon, Paul McCartney and David Bowie. We actually designed the clothes for David Bowie's [Diamond Dog Tour in 1974] that he did in Manhattan.”

“We found a guy in Brazil, who had been stuck with 1,000 of these jumpsuits that said 'Esso' on them. Esso had just changed to Exxon [in 1972]. So, we brought them back to the United States. It was the biggest seller for months. The Rolling Stones, Eric Clapton, Cat Stevens were just some of the people who wore these jumpsuits. We also sold them to Bloomingdales. I always remember the day I was sitting on the floor of the store, since my job was to pin the pants on the bottom for the length, and I looked around and there were 20 people wearing the Esso jumpsuit. It was insane.”

“It was just being in the right place at the right time” said Nicoletti, when asked to reflect on his experience in the fashion world. “Because of that, we had the chance to meet all different celebrities throughout the years. It was a long time ago, so it was a whole different world, but what a great world to be involved in and to be that lucky. To think, I went from standing on the corner in Corona, Queens to being in the clothing business without any idea, ever in the whole world, that's where it was going to lead me. We had such great success.”

Bye Bye Jenny
Despite all the success stemming from Jenny Waterbags, the demands of operating a business on an expanding scale soon caught up with Nicoletti, a self-described 'hippie' at heart.

“We had opened up seven stores throughout the United States,” he said. “We even had one in Martha's Vineyard [Massachusetts] in the summer. We really branched out. We had shoes from Paris, and Italy–Piaggio and Milan. I traveled all over the world to buy fabrics and shoes etc. Richie was a New York guy, and loved to stay at the store, so it was a perfect relationship. I had an apartment in Tangier, Morocco, in the summertime, and I'd go regularly to Ibiza [Spain]. It was just constant work. I finally decided I had enough. So, I made a deal with my partner and sold out. That was it. I moved to Florida and I was going to retire, so I bought a boat. I was going to be a salty seadog for the rest of my life and live on the boat. That lasted about four hours until I got bitten by 16 mosquitoes and decided, maybe I won't live on the boat. I'll buy a little house, and I'll just go on the boat. And I did that for years.”

Racing Came Calling
After settling into to a considerably more sedate lifestyle in Southern Florida, Nicoletti once again found a new opportunity through a friend: interactive marketing, commerce and media specialist Andy Batkin.

“Before computers, Andy had a results line where you would call and get [race] results and for 10 cents a call,” explained Nicoletti. “It was the only way to get results in those days. This had never been done before, and he wanted to branch out to Florida, so I would give the results. I actually had the teletype in my house and I would do these results throughout the day. It was fun.”

And from that experience, more opportunities arose. An initial job recreating call-in stretch calls of races eventually led to a handicapping position at Hialeah Park. Gaining recognition while negotiating the Southern Florida circuit–Hialeah, Calder and Gulfstream Park–Nicoletti's selections picked up traction and were published in the track program before being picked up by an out-of-state publication.

“So, I became a handicapper and I gave my selections,” he recalled. “Then someone said, “Hey, can you do TV?” I said, “Sure.” Scared out of my mind, you know. And started doing TV. The rest, as they say, is history.”

While Nicoletti's expanding career had its rewards, it wasn't without its challenges, however, Nicoletti is the first to admit he relished every moment in equal proportion.

“Finally, I get the job to be the on-air guy at Calder and I go on, I do my first or second race and a little old man calls me over,” Nicoletti explained. “He said, 'You should be on the news.' I'm thinking, 'Boy, the guy thinks I should be on the news as a anchor.' He said, 'No, as a statistic, you bum. They should kill you.' So, you're only as good as your last pick. And I love it.”

When asked how the game has changed over the past two decades, he offered, “Now, it's gotten a little tougher now with the advent of social media, boy, because some people can be pretty rough on there. But I love it. One day you're the best, the next day you're the worst. But if you can do that every day and you love horseracing, you will meet the Damon Runyon-type characters and just have fun with it. And I love when people tell me I stink and then other people tell me they love me. It just goes on and on like that.”

Next Act
In 2010, Nicoletti briefly left Gulfstream following a change of management, but turned the setback into an opportunity to try his hand at acting.

“I've always wanted to try acting, and I saw an ad to play an Italian [father] in 'Tony and Tina's Wedding' at the Broward Center for a month,” said Nicoletti. “It was my first audition. When I got there, every guy trying out for the same part looked like me. A week later, I got the part. Everyone came out from the racetrack to see me. It was really a lot of fun. So I thought it was a easy game. I didn't have as much luck after that, but I did get to do a couple of Indie films, that will never see the light of day, and I was a body double in a local sitcom. But I'll always remember I got the very first part I ever tried out for. It was wild.”

Despite having the chance to live out an ambition to act, the draw of the track never let go of Nicoletti, who was asked to return to racing after his brief stint in show business.

And what was his impetus to return?

“I've had the great fortune of working with some of the greatest people in horse racing,” he said. “I'm getting a little long in the tooth, but I couldn't think of doing anything else because as I walk into this door every day, I have fun.”

With seemingly plenty of fun left to be had, Nicoletti admits retirement has crossed his mind.

“You always think that when you're getting older,” he said. “Everybody keeps asking me, 'How many years are you going to do this?' And I say, 'What else am I going to do?' I bike ride. All I could do is bike ride. The boat thing didn't work out very well and I don't like catching fish anymore. So what else would I do? I mean, I absolutely love coming to work. I'm lucky to be healthy enough to do that and I have fun doing it. Why would I choose to stop?”

And for those familiar with Nicoletti, the word 'stop' simply isn't in the TV personalities' lexicon. And the reason is clear.

“I would equate it to it's like a kid working in a candy store,” he said of the latest chapter in his personal journey. “It's just a great, great way to live your life, if you're a horseracing fan.”