Nickajack Cave Headed Down Under 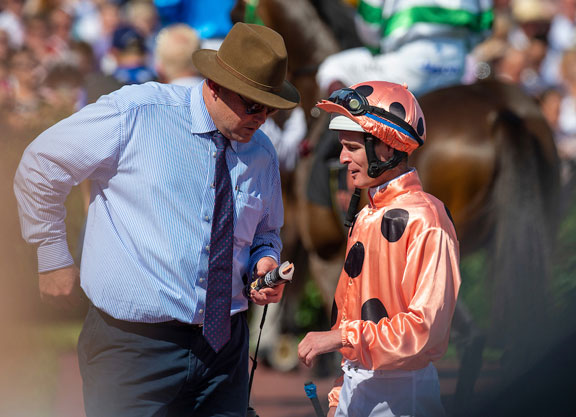 Last out G3 Ballyroan S. winner Nickajack Cave (Ire) (Kendargent {Fr}) has run his last race for trainer Ger Lyons and will be transferred to Peter Moody in Australia with the G1 Melbourne Cup in November his key aim.

Nickajack Cave was previously campaigned by David Spratt, Sean Jones and Lynne Lyons, and the deal for his sale was done prior to the Ballyroan. Moody told Racing.com that the new ownership group-which includes some of the owners of Moody's former sprint sensation Black Caviar (Aus) (Bel Esprit {Aus})-briefly considered keeping the 4-year-old in Ireland for the G1 Irish St Leger in September but have opted to bypass that opportunity to keep his Melbourne Cup weight down.

“The Melbourne Cup is our sole target,” Moody said. “There was a suggestion that he would run in the Irish St Leger but we were worried that if he won that it might have given him too much weight in the Melbourne Cup, so we've decided to bypass that race. It's more than likely that he'll go straight into the Melbourne Cup without another run. We've got staff that will take him into quarantine, he'll stay with Ger until mid-September and then the staff will take him into quarantine in Newmarket afterwards until he travels to Melbourne where my staff will take over at Werribee. I'm grateful for the opportunity and fingers crossed we can have a faultless prep.

“The owners are dead-set keen on the Melbourne Cup but you always hope this sort of horse develops into a nice 2000 to 2400-metre weight-for-age horse post the Cup and he appears to have the right profile.”