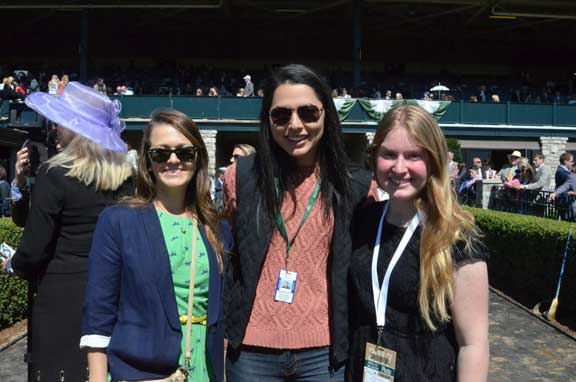 The business of horse racing is, by most indications, on the upswing. While it almost certainly will never approach the level of popularity it enjoyed throughout much of the 20th century, handle, attendance and sales prices at the major circuits have shown steady gains in recent years. The industry appears to have emerged from the Great Recession in a slightly healthier, leaner state than it was in prior.

There is one universally accepted, vexing issue, however, that the sport needs to solve in order to have true long-term viability: the age of its consumers. A grim 2011 study by The Jockey Club revealed that the average age of a horse racing fan at that time was 51 years old. The generation that has kept racing afloat for the last several decades is going to be dying off sooner rather than later, and thus far, the industry has made little to no headway in replenishing itself with an injection of new blood.

Enter three college students, each of whom, like this writer, came across horse racing on their own and have felt frustrated and isolated by the lack of involvement in it from people within their age group. Dare Sutton, Sam Bussanich and Sophie Shore all grew up in different states, but each had chance encounters with racing when they were little, and each fell in love with the sport and developed their interest organically over the years.

The trio connected through social media, and after a conversation at Keeneland last fall, they came up with an idea that has turned into the Nexus Racing Club, an intriguing new venture geared towards making Thoroughbred racing, and ownership in particular, more accessible for young adults.

Nexus's business plan is simple: join forces with prominent Thoroughbred owners and syndicates to have young people, namely college students and recent grads, become partners in racehorses through leasing. There is a $100 one-time membership fee to join, and while members–of which there are 30 so far–will not have equity or decision-making authority in the horses, they will receive essentially all of the other benefits of racehorse ownership without any of the financial risk.

Nexus is selling access, the kind of access that is hard to come by without connections in racing: barn and paddock visits, correspondence with owners and trainers, updates on their horses and ideally, some jaunts to the winner's circle.

Sutton, the elder of the group at 22, graduates next Saturday from Murray State University in Kentucky. Raised in The Bluegrass State, she is the only one of the three to have had racehorse ownership experience, partnering with Pocket Aces Racing on a Lemon Drop Kid filly named Close the Gap, who broke her maiden first out last June at Indiana Grand. Sutton's racing interest turned from casual to dedicated after one of the sport's most memorable moments of the past decade.

“When Rags to Riches won the Belmont, I was hooked,” she remembered. “Two years ago, I became an owner and I've had so much fun with it. So many of my friends ask me how I'm able to get so up close in racing. They sound really interested and don't realize how the sport can be accessible. That's when I thought, 'there's a way we can get young people involved and interested in racing.'”

Bussanich, 19, is from northern New Jersey and attends the University of Kentucky. Her first experience with racing was a trip to Calder Race Course in 2004 with her grandfather.

“I just remember sitting in the grandstand and being amazed by horse racing,” she shared. “It didn't really start with the little girl obsessed with horses and riding horses, it started with horse racing. I came to the University of Kentucky because I wanted to be in Lexington and be fully engaged with everything.”

Shore, 20, is from the Westchester section of New York and is a student at the University of Pennsylvania. She took a trip to Belmont Park with her parents when she was seven and became obsessed with the sport not long after that.

“My first trip to Saratoga was that summer and it was life-changing for me,” she said. “Most weekends, I would go to Belmont and learn all that I could. The last couple of years, I've really been trying to increase my involvement.”

Fresh off of the excitement of owning a part of her first racehorse, Sutton approached Bussanich at the horse haven of Keeneland with a proposition. And while it wasn't exactly what they ended up doing, it became the genesis for the ambition behind Nexus.

“Dare came up to me, and knowing we're both a little bit crazy, she said 'let's buy a horse with a bunch of young people,'” Bussanich recalled. “I was like 'OK, I'm down,' and I said we should ask Sophie about it, because she doesn't have all her screws screwed in tight either, so I'm sure she'd be down with the idea. And she was like 'yeah, let's buy a racehorse!' Looking back, that was going to be really stupid and really bad and was not a good idea. But in December, we met with a lawyer about different ways we could do this.”

Soon after that, Bussanich made a comment about marketing in horse racing on Twitter, one that led Craig Bernick, the President of Glen Hill Farm, to follow her.

Bernick, active on social media, sees an opportunity for the industry to use it to cultivate new fans and participants, but thinks it will take more of a big-picture view to maximize its reach.

“I was really into horse racing as a college student and there wasn't Twitter or Facebook,” the 39-year-old said. “Connecting over shared interests is easier today and the horse business is catching on to social media, but it's mostly self-promotion more than it is trying to grow the sport.”

Originally, the plan was for Nexus to partner with one owner, but Bernick believed in the idea so much, he pushed for them to pursue more leases, and the group was able to get commitments from L N J Foxwoods and Starlight Racing.

“They reached out to me looking for some help, they had an idea and weren't exactly sure how they wanted to proceed,” Bernick said. “They really made a point that most of the ideas for getting young people in the horse business are brought up by old people in the horse business. They wanted to figure out a way to own a horse, but were struggling with how to do it on college budgets. I thought the best way to go about it was to let them partner in a horse without any of the financial burden or opportunity. To get all of the other benefits of ownership that a syndicate would have. As we spoke to some other owners, everybody was really interested and thrilled to help.”

While they are all-in on Nexus, when talking to Sutton, Bussanich and Shore, it becomes clear that their goals in Thoroughbred racing go beyond this specific project. They want to shift the perception of the sport from many outsiders that meaningful participation in it can only come from the affluent.

“We want to have people be actually connected to horses, owners and trainers and bring more people to the track across the nation, hopefully developing future participants, owners and overall fans of the sport,” Sutton said. “We want to get people hooked on the sport and bitten by the bug.”

“A really important concept we tell everyone is the barrier to entry in any other sport is much lower,” Bussanich explained. “How do you become a basketball player? All you need is a ball and a hoop. It's not hard. To enter horse racing, you need thousands of dollars, you need a connection. There's no easy way to get into this industry. I think this club will be a really good way to lower the barrier into the sport. All you need is $100.”

Shore added that while young people aren't completely absent at racetracks, they mostly treat it as an occasion and not something that would be worth a lasting investment.

“They go to the track as a social event,” she noted. “They have a couple drinks, wager $20, take some pictures and they leave. We want to introduce them to all the things that can come from ownership and true involvement in the sport.”

In addition to paving the way for young people and racing fans with limited financial means, Nexus has the potential to raise the bar for young women in racing, a fact that is not lost on Shore.

“I want to make the sport more accessible for women,” she says. “I don't feel like there are a lot of them in high-up positions, so I want to blaze a trail.”

Nexus is scheduled to officially launch sometime between the final two legs of this year's Triple Crown, and while its founders have been bullish on the idea from the beginning, it's the confidence and support of Bernick that has allowed them to think bigger and bigger.

“Craig says he doesn't think we're ready for how big of a response we're going to get,” Bussanich relayed. “I hope he's right, and he's pretty intelligent, so I think he'll be right.”

Bernick added, “If this first year is successful, I would envision that next year, they would be able to partner with a ton of owners, because it's just a great way to spread the sport. I'm really impressed by all three founders. They're really, really smart girls who are passionate. This isn't a hobby for them, it's not a school project. We speak every Monday, and every time, they've done 10 new things out of pocket, set up the company, the entity, they've registered with The Jockey Club, they've got lawyers. It's all a credit to Sam and Sophie and Dare for coming up with it. I never came up with anything like this when I was in college and frankly, nobody else has either.”