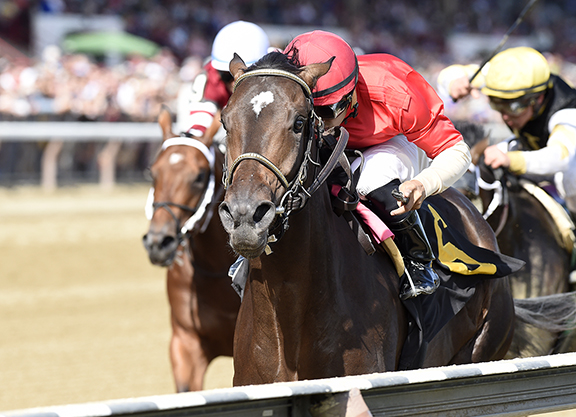 6th-SAR, $83,000, Msw, 9-2, 2yo, 7f, 1:23.51, ft.
BOURBON RESOLUTION (c, 2, New Year's Day–Vindicated Ghost, by Vindication), on the board in his two previous starts, broke through with a 2 1/2-length graduation. Sent off at 4-1, the juvenile set the pace while pressed by favored Lionite (Quality Road) through fractions of :22.90 and :46.29. He dug in gamely when challenged by Lionite to his outside and Slot (Candy Ride {Arg}) to his inside and found another gear in the final sixteenth to pull away late. Slot was second and Lionite third. Bourbon Resolution is the sixth winner for his freshman sire (by Street Cry {Ire}). A $125,000 FTKJUL yearling, Bourbon Resolution missed by just a neck when second behind 'TDN Rising Star' and subsequent GII Saratoga Special S. runner-up Hollywood Star (Malibu Moon) in his June 28 debut at Churchill Downs and was third going six furlongs at Saratoga July 29. His dam Vindicated Ghost is a half-sister to GSP Mymich (A.P. Indy) and to graded stakes winners Chelokee (Cherokee Run) and Salute the Sarge (Forest Wildcat). Lifetime Record: 3-1-1-1, $67,440. Click for the Equibase.com chart or VIDEO, sponsored by Fasig-Tipton.
O-Bourbon Lane Stable; B-Gary & Mary West Stables, Inc. (KY); T-Ian R. Wilkes.