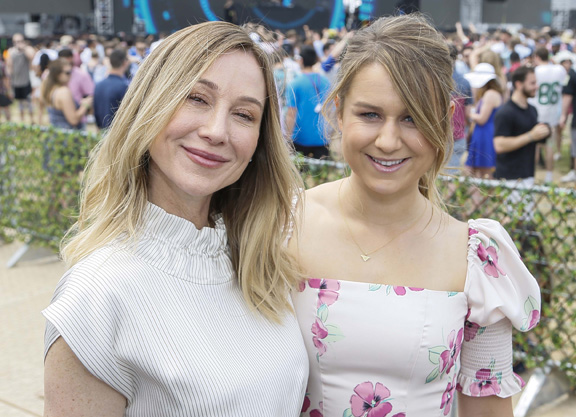 $500 million in six-year revenue increases reported in a court filing by The Stronach Group (TSG) chief executive Alon Ossip was “overstated and misleading” because that figure did not factor in the “significant impact” of rebating high-volume bettors who wagered on races through TSG’s online wagering platform.

Additionally, the 86-year-old family patriarch is now leveling allegations that his daughter, the 53-year-old TSG chairman and president Belinda Stronach, improperly allocated as company expenses “millions of dollars” related to her own daughter’s show-jumping activities with sport horses, even though “this blatant self-dealing” had nothing to do with the running of the firm, whose portfolio includes six United States racetracks.

Frank Stronach is further alleging that it was only when he filed a $540 million (CDN) lawsuit against Belinda Stronach and Ossip last year in a Toronto court that the defendants began to take action “in direct response to the escalating family dispute” to “whitewash years of misconduct and mismanagement of TSG.”

These new allegations are part of a 49-page series of “replies to statements of defense” that Frank Stronach’s attorneys filed May 14 in Ontario Superior Court of Justice. TDN obtained the documents this week via a court records request.

Last October, Frank Stronach and his wife, Elfriede, jointly filed suit demanding a court trial to remove Belinda Stronach and Ossip from all corporate officer and trustee positions related to the Stronach empire.

That litigation also sought financial redress related to an alleged “series of covert and unlawful actions…that have been contrary to the best interests of, and to the overwhelming detriment of, other members of the Stronach family.”

Separately, Andrew Stronach, who is Belinda’s brother, filed his own lawsuit in November alleging similar TSG malfeasance as a result of his sister’s “serious misconduct.”

In January, Belinda Stronach fired back in court with a statement of defense that denied the initial charges and included counterclaims of financial mismanagement by her dad that she alleged cost the family some $850 million (CDN), “with hundreds of millions of this amount likely being irretrievably lost.” She chalked up the purported losses to her father’s ill-advised “passion projects.”

Around the same time, Ossip filed his own defense statement that denied the lawsuit’s charges and questioned Frank Stronach’s fitness to be involved in running TSG. “Over the past number of years, Frank’s behavior became increasingly erratic, as reflected in part in his increasingly disruptive interventions in TSG’s racing and gaming business,” his filing stated.

Now, this latest court reply filed by Frank Stronach implies that years of alleged malfeasance by his daughter and Ossip have played a role in the current equine fatality crisis at Santa Anita Park. Despite the gravity of that assertion, the filing did not state any evidence to directly link their behavior to the recent spate of racehorse deaths.

“Belinda and Alon’s actions in shutting Frank out of TSG and their mismanagement of TSG’s business and affairs have placed at serious risk the ongoing viability of TSG’s racing and gaming operations,” Frank Stronach’s court reply states. “Indeed, in the period since December 2018, more than 20 Thoroughbred horses have died at TSG’s Santa Anita Park racetrack in California.

“The unprecedented number of horse deaths at Santa Anita has sparked public outrage, has forced repeated closures of the racetrack, and has placed the continued operations of the racetrack in serious jeopardy,” the filing continues. “This state of affairs has had and will continue to have a significant and detrimental impact on the business and reputation of TSG [and Stronach family members].”

Asked to comment on her father’s latest allegations, Belinda Stronach responded with an emailed statement, which read, in part, “The Stronach Group, under my leadership, recently led the horse racing industry in progressive reforms to modernize the sport for the betterment of horse and rider welfare…. It appears my father is seeking to negatively capitalize on the tragedy of horse racing deaths versus backing the leading reforms we have initiated for the betterment of the industry. We continue to provide responsible, transparent management of TSG assets and the family trusts. Allegations to the contrary are untrue.”

With regard to TSG’s financial health, Frank Stronach’s court filing claims that back in January, Ossip’s defense statement gave an inaccurate revenues estimate that made the firm’s financials appear rosier than they actually were.

“The alleged revenue increase by TSG of over $500 million over a six-year period is overstated and misleading and does not account for the significant impact that TSG’s practice of ‘rebating’…has on the company’s overall profitability, including in particular rebates provided through TSG’s high-volume XB Select online wagering platform,” the filing states. “When the impact of rebating is taken into account, the increase in TSG’s revenue is drastically reduced.”

Although Frank Stronach’s filing challenges Ossip’s revenue estimate, it does not cite an alternate amount that he believes to be the correct figure.

A spokesperson for Ossip, Paul Deegan, emailed a statement in response to a request for comment about the revenues that read, “Alon has worked tirelessly to create value for the Stronach family, and he has always conducted himself with the utmost probity. Under Alon’s leadership, the racing and gaming business saw a stellar improvement, both financially and operationally. All revenues and expenses were booked in strict accordance with Generally Accepted Accounting Principles. To suggest otherwise is false. The net effect was that key financial indicators that indicate the actual performance of the business, such as EBITDA [earnings before interest, tax, depreciation and amortization], which increased by roughly $70 million in six years, improved significantly.”

Belinda Stronach’s January statement of defense had stated that TSG’s breeding, training and racing (BTR) business segment was “unprofitable under Frank’s direction.” But Frank Stronach’s latest court filing denies that claim, explaining that “To the extent that the BTR business was unprofitable…it was as a direct result of losses incurred in connection with Nicole’s show-jumping activities, which were allocated improperly to the BTR business as TSG company expenses.”

The claim continues: “Notwithstanding the fact that Nicole’s show-jumping has no connection to TSG’s business activities, TSG has spent millions of dollars in funding her show-jumping expenses…for Nicole’s personal benefit. The plaintiffs have learned that in belated and partial recognition of this blatant self-dealing, TSG (at Belinda’s direction) proposed to ‘gift’

Other parts of Frank Stronach’s latest court filing deal with the complex tangle of he-said/she-said accusations that father and daughter have traded in court documents since the suit was initiated. The family spat centers on issues of power and money.

For example, one bone of contention has been whether Frank Stronach’s role in the running of TSG is now actual or ceremonial, and/or if his daughter and Ossip have forced him out of making business decisions and having control over and access to company resources.

“Contrary to the assertion…Frank was and is entitled to make contact with and speak to TSG employees and external stakeholders, and has no obligation to inform or consult with TSG management before doing so,” his court filing asserts. “Frank is directly responsible for the entire business of TSG….He also remains the company’s Founder and Honourary Chairman.”

Frank Stronach also takes umbrage with an “allowance” that has allegedly been allotted to family members by his daughter.

“In essence, Belinda has determined unilaterally that each Stronach family member will be paid the equivalent of an allowance in an amount to be determined by Belinda, Alon, Frank Jr., and Nicole,” Frank Stronach’s filing states. “Unsurprisingly, the ‘allowance’ to be paid to Belinda and her children far exceeds the amounts to be paid to other members of the Stronach family.”