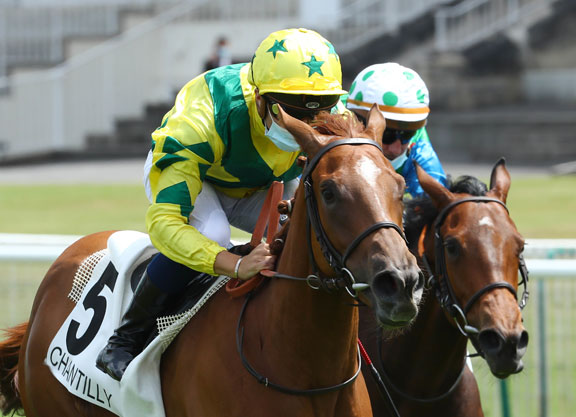 DEAUVILLE, France–Nurlan Bizakov has made no secret of his intention to make a lasting mark on the French Thoroughbred industry, the Kazakhstani businessman having over the past two years purchased two of the best-known studs in the country: Haras de Montfort et Preaux and Haras du Mezeray. Those, along with Bizakov's Hesmonds Stud in the UK, have been united under one name, Sumbe, which will this weekend present its first sales consignment at Arqana's December Breeding Stock Sale. And Sumbe-named for the famed Kazakhstan horse and agricultural region where Bizakov was born–certainly isn't making a quiet entrance to the consignment scene: it offers two of the sale's star turns in Rougir (Fr) (Territories {Ire}) (lot 160), this year's G1 Prix de l'Opera winner, and Speak Of The Devil (Fr) (Wootton Bassett {GB}) (lot 172), a narrow second in last year's G1 Poule d'Essai des Pouliches, as part of a Saturday selection of black-type fillies.

“Mr. Bizakov bought Haras de Montfort at Preaux at the end of 2019 and, since that, purchase, Haras de Mezeray, so two big, nice farms in France,” said Mathieu Alex, longtime manager of Haras de Montfort et Preaux prior to its name change. “Mr. Bizakov still owns Hesmonds Stud in England, so that comes under the Sumbe banner too.”

“We are just about to run a consignment in Deauville for the first time at the breeding stock sales,” Alex added. “It's a very exciting exercise mainly thanks to the horses we'll be presenting, including two Group 1-winning fillies. It's a great consignment to have for the first year.”

Rougir, owned by the Chehboub family's Haras de la Gousserie, is the only current-season, Group 1-winning 3-year-old filly to be offered at Europe's breeding stock sales this year. A debut winner in June of last year at two, Rougir capped a productive campaign with a win in the G3 Prix des Reservoirs following a third in the G1 Prix Marcel Boussac. She came within a half-length of a Group 1 victory in August when fourth behind Mother Earth (Ire) (Zoffany {Ire}) in the G1 Prix Rothschild, but made amends next out when nosing fellow Arqana entrant Grand Glory (GB) (Olympic Glory {Ire}) in a thrilling finish to the G1 Prix de l'Opera on Arc day. Rougir was last seen finishing seventh in the GI Breeders' Cup Filly & Mare Turf at Del Mar on Nov. 6. Rougir, the third foal out of the listed-placed Summer Moon (Fr) (Elusive City) last visited the Arqana ring as a yearling, when she made €55,000 at the August yearling sale.

“Rougir's owner, Mr. Kamel Chehboub, is a breeder I've known for a long time and we've renewed our relationship lately,” said Alex. “We're very grateful for his support. It's a fantastic opportunity to buy a Group 1-winning filly. She's very sound and she could race on. The opportunity is very rare so we look forward to it.”

Speak Of The Devil and two additional black-type fillies in the Sumbe draft, Frankel's Magic (Fr) (Frankel {GB}) (lot 190) and Roman Bamb (Fr) (Holy Roman Emperor {Ire}) (lot 213), are owned by Rashit Shaykhutdinov, who was a client with Mezeray that has stayed on after the Sumbe transition. Speak Of The Devil, a €62,000 Arqana October yearling, ran just once at two, winning a late-season maiden race in Deauville for trainer Fabrice Chappet before finishing a nose second in the Pouliches in just her third start the following spring. Speak Of The Devil picked up a first black-type win over seven furlongs in last year's Listed Prix de Saint-Cyr, and this year won three listed races over a mile for new trainer Frederic Rossi. She came close again to winning a Group 1 when third, beaten a neck, in the Prix Rothschild in which Rougir was fourth. Speak Of The Devil is a half-sister to the triple Group 3 scorer Morando (Fr) (Kendargent {Fr}).

“Mr. Shaykhutdinov was a client of Haras du Mezeray, so when Mr. Bizakov bought the farm we were connected and we are very grateful for his support,” said Alex. “Speak Of The Devil is a very, very good-looking filly. She's by top-class sire Wootton Bassett and she was beaten a very short margin in the French Classic. She's a proper Group 1 filly with a good pedigree, by a great stallion, and is a very good-looking filly so I'm sure there will be plenty of people wanting to buy her.”

Shaykhutdinov topped Arqana's December Breeding Stock Sale in 2019 when his listed-placed Frankel Light (Ire) (Frankel {GB}) sold to Charlie Gordon-Watson for €1.3-million, and Shaykhutdinov will look to emulate that feat with another daughter of this year's leading sire by European earnings, Frankel's Magic. The 4-year-old made her belated racing debut last July a winning one, interestingly scoring over 2400 metres. She dropped back to 2000 metres for a pair of listed placings last autumn and was second in the Listed Prix Panacee over 2400 metres on very soft going on Oct. 4. Frankel's Magic, who was a 1.15-million gns buyback from the 2018 Tattersalls October Yearling Sale, is out of the dual listed-placed Global Magic (Ger) (Lando {Ger}), herself a half-sister to eight stakes horses including group winners Global Dream (Seattle Dancer) and Global Thrill (Big Shuffle). Shaykhutdinov could also see fierce bidding for 3-year-old filly Roman Bamb, who broke her maiden at Chantilly in March before twice placing at listed level over 2000 and 1900 metres. She is from the family of the G1 Pretty Polly S. winner Nezwaah and is by Holy Roman Emperor, who is compiling a solid record as a broodmare sire.

Sumbe, from the corner section of Yard A from which Mezeray enjoyed so much success at Arqana, also sends out 3-year-old filly Louliana (Ire) (Acclamation {GB}) (lot 135), winner of the six-furlong Listed Prix Marchand d'Or in June for owner Mbaye Niang and a daughter of the listed-placed Rosie's Premiere (Ire) (Showcasing {GB}). Sumbe also offers two foals: a colt by the ascendant Wootton Bassett (GB) out of the G3 Prix du Bois third and black-type producer Sage Melody (Fr) (Sageburg) (lot 73) and a first-crop daughter of Calyx (GB) out of the G3 Prix Minerve second Game Zone (Ire) (Hurricane Run {Ire}) (lot 266) who is from the family of dual Group 1 winner Immortal Verse (Ire) (Pivotal {GB}) and her G1 Cheveley Park S.-winning daughter Tenebrism (Ire) (Caravaggio).

The strength of the foal and breeding stock markets at Goffs and Tattersalls in recent weeks should permit sellers to enter the final breeding stock sale of the season with confidence, and Sumbe has a draft that gives it every chance to stand out.

“There have been very, very strong markets at Goffs and in Newmarket, and Arqana has done a very good job with its catalogue,” said Alex. “There are a lot of very, very talented horses getting ready to sell, so hopefully the momentum will carry on.”