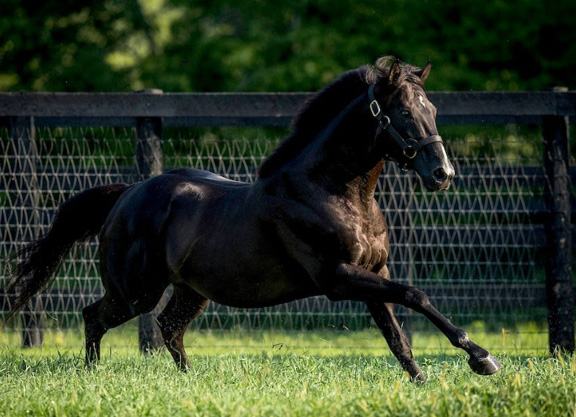 In a new twist on the fast-evolving concept of racehorse partnerships, breeders who own a War Dancer (War Front) yearling can “contribute” their horse to an ownership collective in exchange for a $25,000 equity share in a racing partnership that is expected to be comprised of 10 to 15 War Dancer offspring that will hit the track starting in 2020.

Known as the War Dancer Racing Partnership, this unique arrangement is believed to be the first of its kind to allow breeders who put up yearling equine assets to share in revenue streams that will be generated by on-track earnings of all the horses in the stable.

It's the latest out-of-the-box idea from Robin Malatino, who founded Sugar Plum Farm in New York after making her mark as the chief executive of Saratoga Beverage Group. Years ago, Malatino got that firm's chief product, Saratoga Water, to stand out in a highly competitive sector by changing the packaging to a distinctive blue bottle that remains easily identifiable today.

“Most people are scratching their heads saying, 'Huh? We've never seen this before,'” Malatino told TDN with a laugh. “But a few people have called us and said, 'This is great!' The process is almost like if you're going to nominate for a sale. You have to have x-rays, a video, and everything else. But we don't care as much about the mother's pedigree to get into the partnership. We're looking for athletes.”

All yearlings sired by War Dancer are eligible to be nominated for free. Breeders can nominate their yearling(s) from Apr. 1-May 31, 2019. Malatino said a panel of advisors comprised of trainers, breakers of young horses, and veterinarians will select the partnership's yearlings based on athleticism and conformation.

“Every horse that qualifies gets in,” Malatino said, estimating that the partnership will include 10 to 15 offspring from War Dancer's current yearling crop of about 90.

“This way, we guarantee breeders that [their horse] will get to the racetrack, primarily if they're New York-breds, which ensures them a chance at breeders' awards,” Malatino said. “The cool part about is every horse that breeders contribute is valued at $25,000. That's a number that we picked because we know that's pretty much what the breeder has into it at that point.”

Malatino used a round number of 10 yearlings to explain the math behind the profit-sharing: If 10 breeders each put up a horse valued at $25,000 each, that's $250,000 in equine equity. Other partners–including Malatino–will contribute $750,000 in capital to buy into the partnership. Each individual breeder would thus own a $25,000 stake in the partnership (or 2.5%, based on a $1 million model). The capital contributors would collectively own the other 75%.

Malatino said that $1 million will be enough money to cover training costs to get those 10 horses to the track through the middle of their 3-year-old years. “So the breeder gets no bills,” she added.

Horses will begin their initial training in Ocala, Florida. Malatino said she anticipates most of the trainees will eventually race in New York. A partnership website will host training updates and videos, as well as communication from trainers. There will also be an investment platform for individuals to buy into the partnership at relatively smaller amounts, like $500 or $1,000.

As the horses span their career arcs, purse earnings will accrue and will be offset by ongoing training costs. There will be a per-share distribution after the last horse in the partnership is sold or retires.

“So what do you get as a breeder?” Malatino asked rhetorically. “Knowing that your horse is going to be trained well by one of the top trainers in New York, where you're eligible for breeders' awards. You've also diversified your investment, because we all know that even to the best of horses, things happen. And the third thing is, you're going to have fun. Because we're going to put the group together in such a way where [everybody collectively] gets to design silks, pick names, and all the enjoyable, social things like that.”

Breeders will be notified by June 30 if their War Dancer yearling has been selected. The transfer of ownership will be complete by Sep. 30.

War Dancer stands in Saratoga as part of the Irish Hill & Dutchess Views Stallions roster at Irish Hill Century Farm. With earnings of $1,068,927, War Dancer was a 'TDN Rising Star' who won or placed in nine graded stakes, including a victory in the 2013 GII Virginia Derby. He covered 200 mares in his first two years at stud, of which 100 were stakes performers/producers. His fee is $7,500 LFSN.

As the president War Dancer, LLC, Malatino said she committed early on to an unorthodox marketing plan to attract both quality and quantity mares. Offbeat social media marketing campaigns to promote War Dancer include “Breeding With The Stars” and “Most Eligible Stud” themes.

“This way, at the end of the day, if War Dancer is his father's son and produces greatness like War Front has, this will be an easy conversation, and everyone will think, 'Oh, they were so smart,'” Malatino said.

“But the truth is, if it doesn't happen and the genetics don't work, I'll know we did everything possible. And knowing that makes you feel really good about what you're doing.”