New Horizon for a Racetrack Warrior 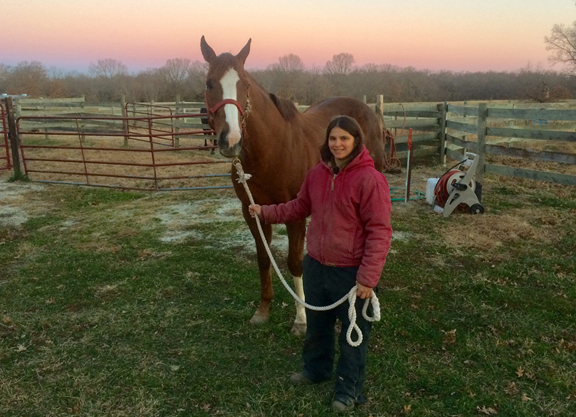 Last Wednesday, a 12-year-old gelding named Bartletts (Mr. Greeley) arrived at the Michalson Farm, its 180 acres contoured by the rolling hills east of Columbia, Missouri and turned to its purpose by the Michalson family–Greg, Gena, and their daughter, Marian. As the van turned off the highway and made its way along county road WW, Bartletts was surely stirred from the somnolence of his long journey by the unmistakable feel of horse country.

Like so many riders drawn to the challenge of the Retired Racehorse Project, Marian Michalson recently began her search for a horse to enter in the 2018 Thoroughbred Makeover, to be held in early October at the Kentucky Horse Park. The RRP differs from programs oriented toward the rescue of horses that have fallen into perilous circumstances. It's a program of renewal, rather than rescue. The typical approach is to find a sound, healthy 4- or 5-year-old close enough to the end of its racing career to qualify as an off-track Thoroughbred–in the parlance of racehorse retirement, an OTTB. This was exactly what Marian was looking for–until the photo of a 12-year-old racehorse with 23 wins in 111 starts popped up on her newsfeed.

Since age 11, Marian has schooled Thoroughbreds returning to the farm after their retirement from racing. Her first big success was a filly named Western Witch, bred and raced by Michalson Farm and subsequently trained and ridden by Marian to an Adult Jumper Championship at the St. Louis Charity Show.

That was around the time when Eugene Melnyk's young mare Prior Park, by Silver Deputy, gave birth to Bartletts, a chestnut colt by Mr. Greeley. Marian was just out of high school, a working student first in Florida and then at a St. Louis lesson and show barn, developing her skills as a show jumper. By the time Bartletts made his first start at Saratoga for Melnyk Racing Stables, Marian had become a working student for German show jumper Wilhelm Genn, based in Ohio and known for his brilliant career as a Grand Prix jumper.

At Genn's stable, Marian encountered some of the hardest work she'd ever done and the longest days she'd ever known, traveling 40 plus weeks a year while caring for about 20 horses. During that time she'd also picked out, trained and competed on the first of two horses she campaigned to Zone 7 Young Jumper Championships.

Bartletts had come close a couple of times, but didn't break his maiden until he made his eighth start in a $45,000 maiden claiming race–his second attempt on turf and his fifth start as a 3-year-old. He'd been ridden by seven different jockeys, shipped five times, was claimed twice, and claimed again two starts later. His future as a racehorse was far from settled.

Bartletts entered his racing prime as a 5-year-old, which coincided with his move to synthetic surfaces. Apart from a string of wins at Finger Lakes, he didn't have much enthusiasm for dirt tracks. He had a decided preference for the Tapeta at Presque Isle Downs, but he also ran well on Turfway Park's Polytrack. He had speed he could carry up to a mile and, once he found his footing, he started winning races.

After finishing her degree, Marian returned to the farm and continued re-schooling the family horses for a second career. In 2014 she was co-chair of the organizing committee for the 2014 International Student Rider World Finals in Florida. In cooperation with the World University Equestrian Federation, she helped organize US hosting of teams from Europe and Canada. And, of course, she continued to ride.

Meanwhile, at age eight, Bartletts began his long, random descent through the claiming ranks. During a racing career that spanned 11 years, he was ridden by 41 jockeys, had 13 trainers, raced at 12 different tracks and accumulated lifetime earnings of $497,293. Always there to run, he had the lead at one call or another in 50 races. He couldn't have run so willingly for so long if his life as a racehorse hadn't been a good life, and it's arguably sad that he had to leave it behind. Retiring a horse like Bartletts from the only life he knows can't be easy, but nobody knows better when it's time than those closest to him. It's a credit to the racing industry that the norm among owners is to want what's best for the horse.

Time at Michalson Farm is marked off by the horses that come and go. You can multiply the excitement of a new arrival by whatever number you choose and still not have enough left to get you through the work that lies ahead. Bartletts isn't a typical OTTB and could be even more challenging than most, but, as Greg said, “A horse that's given that much for so long deserves a chance, and if nothing else he'll get a good retirement home here with us.”

It seems the gratitude felt by those who know horses never runs out.

A couple of years back Marian earned certification as a surgical technologist, but she's recently cut that back to part time. She's ready for a new challenge, and Bartletts needs a new job. They'll both have a little less stress and a little more time to relax and enjoy life on the farm. He'll have some time off, and then Marian will give him the chance he deserves. Click here for video of the initial training of Bartletts on Michalson Farm.