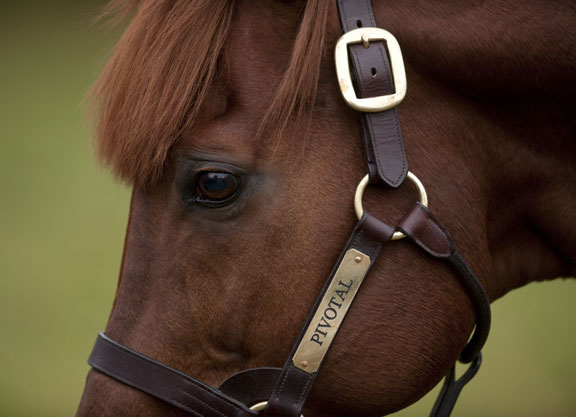 Cheveley Park Stud’s seemingly ageless Pivotal (GB) added Group 1 winner number 31 to his haul in Australia on Saturday when the William Haggas-trained, Tom Marquand-ridden Addeybb (Ire) took the 2000 metre G1 Ranvet S. at Rosehill by a half-length. Back in third was another son of Pivotal, Godolphin’s Avilius (GB). Avilius is a triple Group 1 winner himself and took this race last year.

Pivotal, at age 27, is still covering a select book of around 30 mares at Cheveley Park for a private fee. Cheveley Park Managing Director Chris Richardson told the TDN last week that, having covered “four or five mares” so far this season, he had his first mare scanned in foal last Monday.

“He looks like he’s continuing where he left off last year, although he covers a book of only about 30,” Richardson said. “He’s certainly in good heart, thankfully.”

Since siring his first crop in 1998, which yielded Group 1 winners Golden Apples (GB) (still his leading earner), Kyllachy (GB) and Silvester Lady (GB), Pivotal has kept up a remarkable rate of consistency. His two best crops were in 2007 and 2008, which provided four Group 1 winners apiece. Addeyebb and Avilius are both from Pivotal’s 2014 crop, and his youngest Group 1 winner is Siyarafina (Fr), who took the G1 Prix Saint-Alary in her third start last year and is now apart of the Aga Khan’s broodmare band.